How did a black African slave come to be chosen as the leader of an Arab Gulf sheikhdom in 1937?

When Sheikh Said, Ruler of Kalba died on 30 April 1937, the leading citizens (or ‘notables’) of this small Trucial State elected his 12-year-old son Sheikh Hamad as his successor. This meant that a regent was needed to rule over Kalba until Hamad came of age. The choice of the notables was Barut bin Yakut, an African, and a man whose official status was that of slave.

There was a long history of the enslavement of East African people by Gulf slave traders, and Barut would have been part of this trade. However, Gulf slavery at this period is not to be compared with the worst historical excesses of slave ownership, and the system also presented talented people with opportunities for personal advancement.

It seems that Barut had lived in Kalba since the end of the nineteenth century. The sheikhdom, on the Gulf of Oman, became independent from Sharjah in 1903. By then Barut had risen to be the head slave of Sheikh Said, and acted as governor of the state during the Sheikh’s absence.

In the uncertainty that followed Sheik Said’s death in 1937, Barut initially fled Kalba, fearful of who might take over power. But following the election of the young Sheikh Hamad, the inability of the notables of Kalba to agree on a suitable choice for regent from amongst their own number led them – unanimously – to choose Barut, on the grounds that he was ‘capable, experienced and well acquainted with the affairs of the state’. 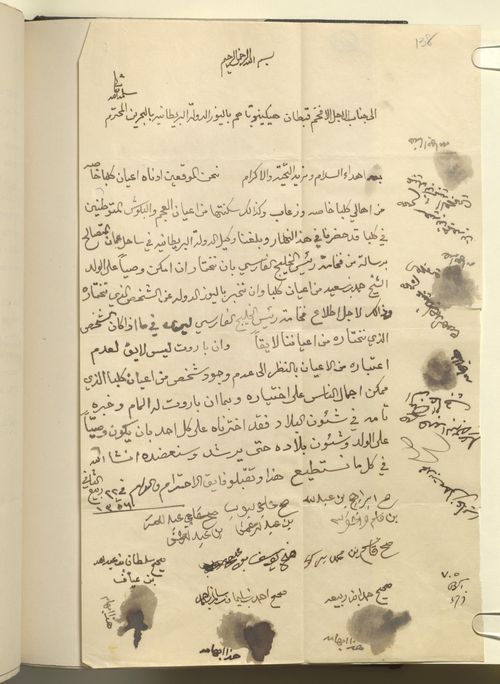 Letter dated 1 July 1937 from the notables of Kalba to the Political Agent, Bahrain informing him of their choice of Barut as regent for the boy Sheikh Hamad bin Said: IOR/15/2/2016, f 148.

The notables’ choice left the British authorities in the Gulf with a dilemma. Although there were precedents for slaves acting as heads of tribes in the region, any decision to formally recognise Barut as regent would be embarrassing given his legal status. The British also feared that the rulers of the other Trucial States (the modern United Arab Emirates) would be reluctant to accept a slave as de facto ruler. 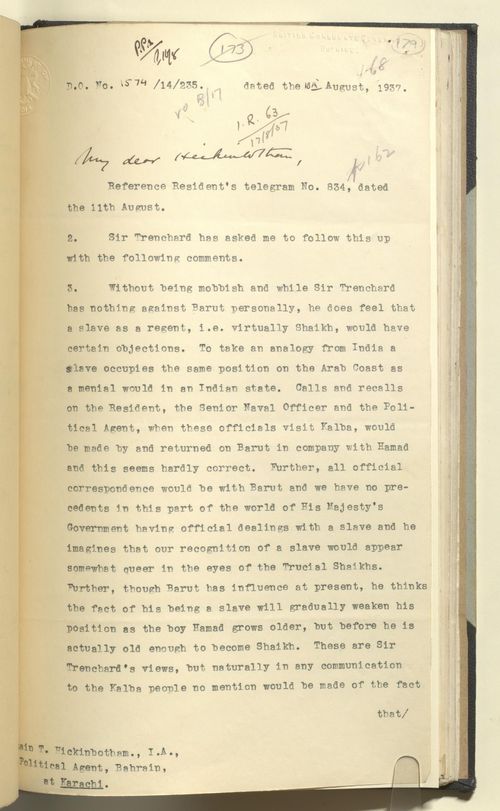 In the event, the British authorities put pressure on the notables of Kalba to choose someone else, and the decision led to the appointment as regent of Sheikh Khalid bin Ahmed, the former ruler of Sharjah and a close relative of the young Sheikh.

Despite being appointed Regent of Kalba, Sheikh Khalid preferred to spend his time sorting out tribal differences elsewhere, and control over Kalba’s day-to-day affairs was again left to Barut.

Kalba’s independent existence came to an end in 1952, when the state came back under the direct administration of Sharjah.

Posted by Margaret.Makepeace at 09:00:00 in Politics , Qatar , Slavery