In honour of British Science Week #BSW16 we are looking at examples of ciphers and codes in manuscripts from the British Library.

Add MS 32253 is part of a series of cipher letters relating to despatches from the English Foreign Office to British ministers at foreign courts 1760-1830. These volumes are a treasure trove of codes, letters and keys. Here is a letter from Secretary of State, Sir Francis Windebank (1582-1646) writing to his son from Paris in 1640 where he touches upon the competition between himself and English Ambassadors in the French court: “I stand telling him plainly that there is so much malice upon me”. 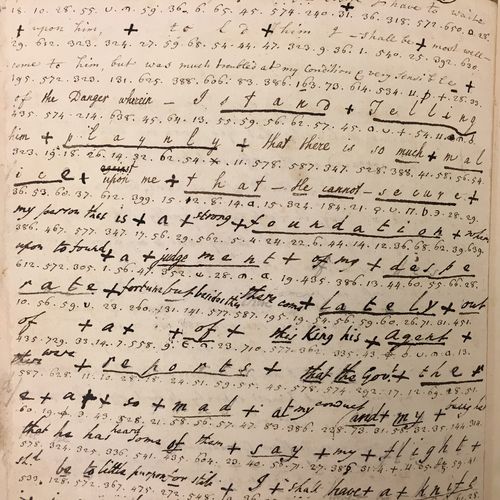 The letter begins in plain English but cipher is introduced on the first page. The cipher has been translated on the second page and a key added on the third. 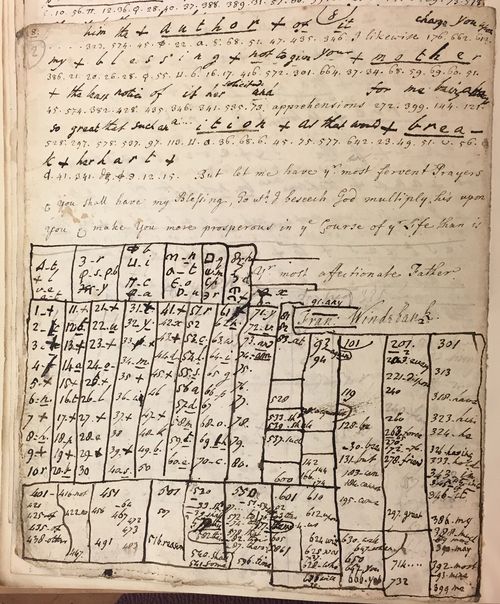 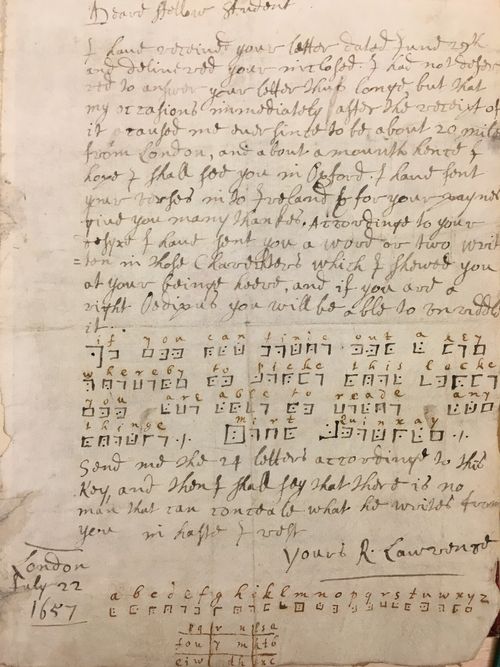 Another collection containing manuscripts in cipher is the Canning Archive which includes the papers of Foreign Secretary and Leader of the House, George Canning (1770-1827).

The letter below was sent from Paris in 1807 at the height of Napoleon’s military and political success in Europe, only two months ahead of the French invasion of Portugal, presumably at some risk to the sender. The letter was marked on receipt, probably by one of George Canning’s foreign office secretaries, as ‘Most Secret’. The hidden message has been written in sympathetic, or invisible, ink (blue text) with a second message then over-written in conventional ink. The hidden message has been revealed using a chemical reaction, by brushing on a liquid (apparent by the yellow staining), but messages were also sometimes revealed using heat. Sympathetic ink was used for the transmission of secret intelligence up until the late-19th Century. 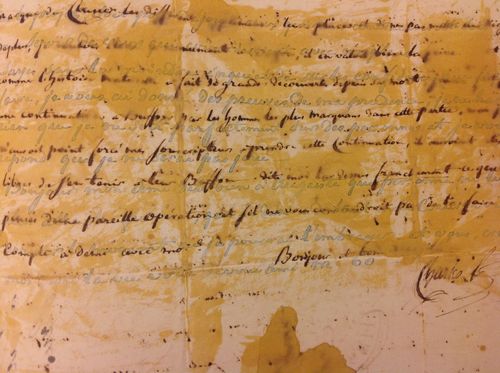 Detail of a letter in sympathetic ink from Charles McMahon to George Canning via the Foreign Office, 19 September, 1807 Add MS 89143.

This next letter was written from St. Petersbourg by Stratford Canning, British Ambassador to the Ottoman Empire, and contains a message in cipher written between the lines of a standard letter. The use of cipher for the sending of confidential diplomatic messages was widespread and it seems as if Stratford has used the opportunity to send both a conventional letter with news of diplomatic negotiations along with a coded counterpart containing perhaps a more forthright opinion. 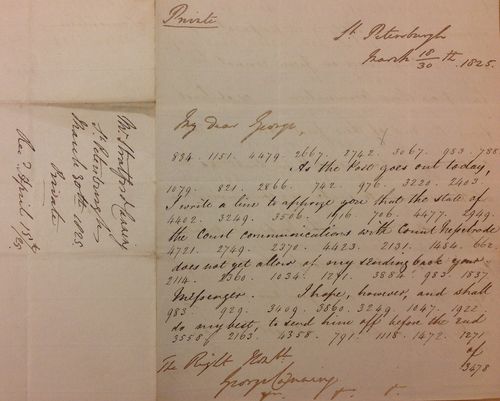 Stratford Canning had been sent by George Canning to initiate negotiations between Britain and Russia over the status of the border of Russian America (Alaska) and to seek support for the Greeks in their war of Independence against Turkey. Although his discussions with Tsar Alexander I and his chancellor Count Nesselrode were successful in relation to resolving the border issue, the hoped for bilateral agreement over the status of Greece, outside a planned Europe-wide conference, did not eventuate and Stratford left St. Petersburg during April 1825.

These are just a few examples of some of the exciting manuscripts in code and cipher that are housed in the British Library. More can be searched for and discovered on our online catalogue.