Lack hair?  Going grey?  Suffer from 'dandriff' and scurf?  Need a sure fire winner at the races?  The hairdresser, ‘Professor’ Frederick John Browne, could address all of these issues, and more.

A gifted self-publicist, Browne made use of the 19th century’s version of social media.  In addition to handbills and newspaper advertisements, he publicised his salon and wares on the covers of inexpensive popular novels issued by instalment.  Part nine of Shirley Brook’s Sooner or Later  celebrated Browne’s “ventilating and invisible peruke”.  The Professor hijacked popular songs substituting his own hair-related  lyrics, (“How sweet to the tresses is Browne’s Toilet Gem!” to the tune of ‘Home Sweet Home’); produced a sixteen page guide to his services modestly entitled “The Rising Wonder” and kept his clients up to date with his activities via regular issues of Professor Browne’s Toilet Almanack. 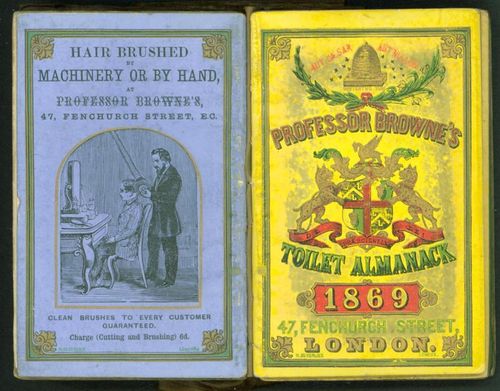 B.L. C.194.a.752. Although ignorant of Instagram, Brown recognised that an image had more impact than words.

Browne, recognising the importance of visual marketing, included images (and colour where possible), facts and figures (not exclusively hair related), tips on hair care and reviews of new Browne merchandise (including the much lauded ‘concave slanting scurf brush’. 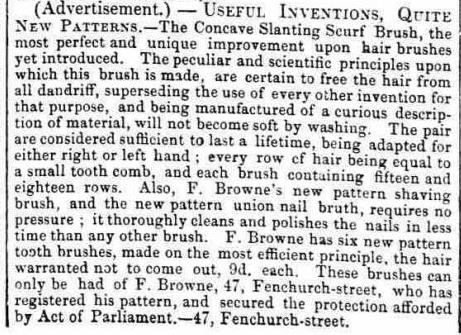 His writing was characterised by humour and rhyme.  The parodies and punning references to literary and contemporary figures (from Shakespeare and Johnson to Louis Napoleon) appealed to the emerging educated middle classes.

The sheer number of verses is overwhelming and occasionally drollery can feel a little strained, for example when recommending his cologne, ‘The Jockey Club Bouquet’, Browne recounts a dream in which a jockey brandished a fragrance bottle under his horse’s nose claiming “this magic essence which has come from Browne’s, Will make me a winner at Epsom Downs”.  Similarly, the Byron tablet soap which guaranteed “a perpetually soft white hand”. 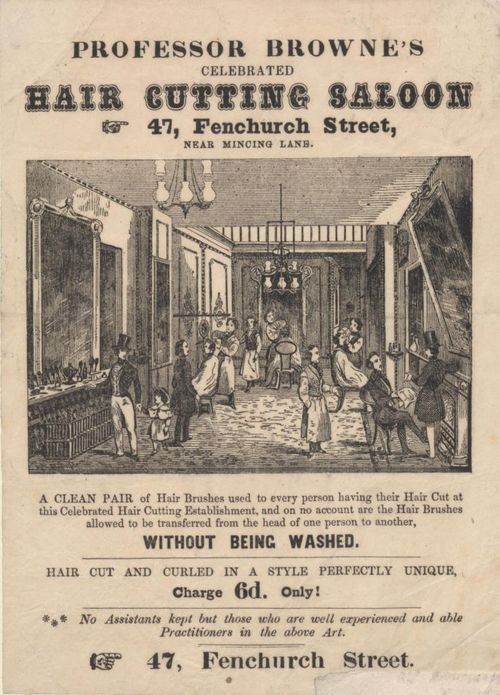 The comfortable salon in Fenchurch Street, was furnished like a gentleman’s club, albeit one with private rooms for dyeing or having one’s hair “brushed by machine”. It was open from 8am (and sometimes 7am) to 9pm.  Patrons could sit by the fire and browse newspapers, purchase the many fragrances and elixirs Browne had developed and patented, or discreetly examine “the Largest Stock of Ornamental Hair in the World always on view".