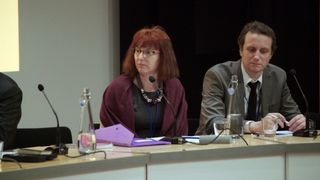 Highlighting the global networks which are deeply embedded in the history of the British Library, Dr Tom Overton opened the symposium opened with his keynote on Robert Browning, Anthony Panizzi, Archives and Migration. This sense of legacy was picked up on by Christian Poske, Jeremy Brown, Pauline McGonagle and Sasha Valeria Millwood in the first panel: Early Encounters with the Archive. Discussing the challenges of archival work, and the pivotal role that the cataloguer plays in translation, the speakers showed us that repositories like the British Library can ‘root’ a collection, often in contrast to the rather nomadic lives of the people they represent.

Katie McElvanney, Anne-Marie Eze and Dvora Liberman went on to explore concepts of translation and migration in the next panel: Crossing Borders. Katie discussed translation and authority in her research on Russian woman’s journalism. Her account of a network of letters sent to, and from, the Russian Liberation Committee chimed with the papertrail that Anne -Marie uncovered during her investigation of the shadowy Italian art dealer Abbe Luigi Celotti. Anne-Marie referenced the absence of certain ‘types’ of people from art history, and Dvora provided an opportunity to think about other voices that are ‘hidden’ from history. Dvora uses oral testimony to provide new insight into legal proceedings in the UK, and in this paper she reflected on the interactions between interviewer and interviewee –the smiles or nods- that get lost in translation from audio recording to transcript. 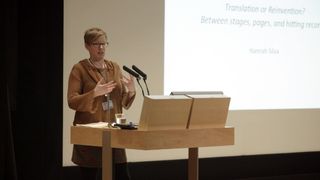 In the second half of the day, the audience was treated to audio and video footage in Hannah Silva’s exploration of Live Writing: Black British Poetry in Performance – Translation from Page to Stage? This was followed by the third panel on The Translator in the Archive, which included Deborah Dawkin’s archival encounter with the author, translator and broadcaster Michael Meyer. Peter Good noted some of the intimate and touching stories preserved in the archives in his paper on the East India Company in Persia, and Pardaad Chamsaz’s introduction to the work of Stefan Zweig provided another perspective on the relationship between collection, text and originator.

The last panel of the day saw some of the speakers return to the stage to discuss how the archives themselves can change the direction of a research project. Geraldine Alexander, who wrote her thesis on the photographer Fay Goodwin, talked about how the British Library collection shaped her own project and threw up unforeseen connections. As the day drew to a close, the panel agreed that the archive was a space of intrigue, surprise, questions and unexpected emotional ties.