The curious tale of the pigeons in the workhouse

It’s April Fools’ Day but here on Untold Lives we find it difficult to plant a spoof.  Many of our stories from real life are so strange that readers couldn’t be expected to notice any difference.  So this is the true but curious tale of the pigeons at Marylebone Workhouse.

At a meeting of the Board of Poor Law Guardians for St Marylebone in October 1850, Mr Michie enquired if pigeons were being kept at the workhouse.  Secretary Mr Thorne replied that a number of pigeons had made their home in the workhouse, causing a great nuisance, but they were no longer there.  After the death of James Jones the workhouse master, a member of the parish vestry had asked who owned the pigeons and was told that they belonged to no-one.  The vestryman then sent someone to catch the birds and take them away.  Michie said that the pigeons were valuable and demanded that the vestryman be named.  Thorne revealed him to be Samuel Steele, who was present sitting amongst the ratepayers. 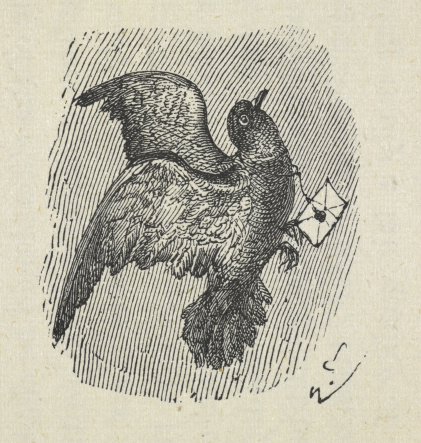 Mr Walters observed that the birds removed were carrier pigeons.  Betting and racing books were kept at the workhouse, and gambling took place.  The late master Jones had kept the pigeons to send to the races to bring back speedy news of which horses had won so that safe bets could be made accordingly.  It was claimed that Jones actually died with a racing and betting book in his hand –‘Sensation’ amongst those present!

It was also suggested that, if the pigeons were valuable, that they should have been sold for the benefit of the parish.  The subject was then dropped and the Board dispersed ‘thunderstruck at the extraordinary revelations that had taken place’.

However this was not the end of the story.  At a vestry meeting it was alleged that Samuel Steele had netted 40-50 pigeons at the workhouse and made pies of them for himself and his family.  The inmates of the workhouse, who had fed the pigeons each day and treated them as pets, were very upset when they were removed.  John Wilson was one of the vestrymen who denounced the whole affair as shameful.  He needled Steele by drawing pictures of birds at vestry meetings, with one caricature entitled ‘Sam Steele’s pigeons’.

Steele vehemently denied the allegations.  He retaliated by going up behind Wilson in the street and inflicting a severe blow to the back of his tormentor’s head.  Wilson struck back hard in defence before the two men were separated. Wilson offered to forget the attack if Steele apologised and put a guinea into the poor box. When Steele declined, Wilson brought a charge of assault against him.

At Marylebone Police Court Steele offered to make an apology to the public and bench (but not to Wilson) for having committed the first breach of the peace.  Magistrate Robert Broughton decided that Steele must be punished since he had taken the law into his own hands.  He imposed a fine of 40s and costs which Steele paid forthwith. And thus the Marylebone Workhouse ‘pigeon affair’ was brought to a conclusion.

Posted by Margaret.Makepeace at 09:00:00 in Conflict , Crime