The officer and the Anzac

During the First World War my great aunt Annie Procter worked at the Australian High Commission in London. Some months ago we discovered her autograph book in the loft at my parents’ home.  One of the contributions was this cartoon drawn by K A Tunks on 20 June 1916.  An army officer is addressing an Anzac: ‘Why don’t you salute? Can’t you see I’m an Officer?’  The relaxed Anzac replies: ‘Gee! You’re lucky. I’m only a bally Private’. 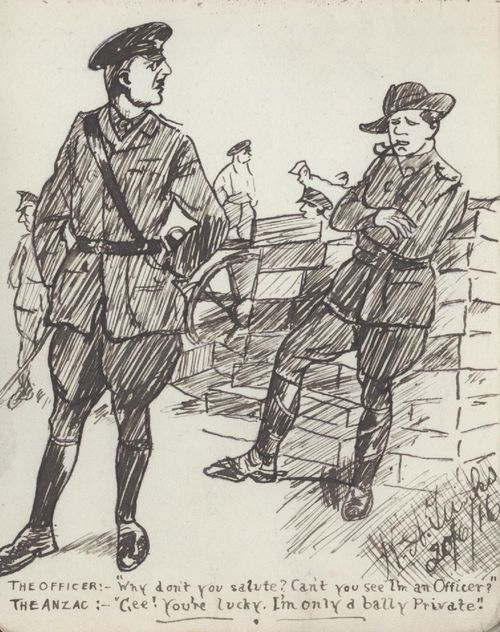 The Officer and the Anzac

Keith Aubrey Tunks was born in Parramatta, New South Wales.  He enlisted in the Australian Imperial Force on 8 February 1915 at the age of 19.  In April 1915 Private Tunks left Australia for Gallipoli with the 1st Field Ambulance. He was wounded at Gallipoli and fell seriously ill with dysentery after the Lone Pine engagement. In August 1915 he was evacuated to England, contracting malaria on the way. On his discharge from a hospital in Wandsworth, he was sent to Monte Video Camp at Weymouth in Dorset. This camp was established for soldiers of the Commonwealth Military Forces who had been invalided to England from the Dardanelles with either sickness or wounds and who were almost fit for return to duty.  As he had been dangerously ill, Tunks was posted to the accounts section of the Australian Military Office at 130 Horseferry Road, London. This was how he crossed paths with Annie Procter, a 21-year-old Civil Service stenographer, and drew a picture in her autograph book. 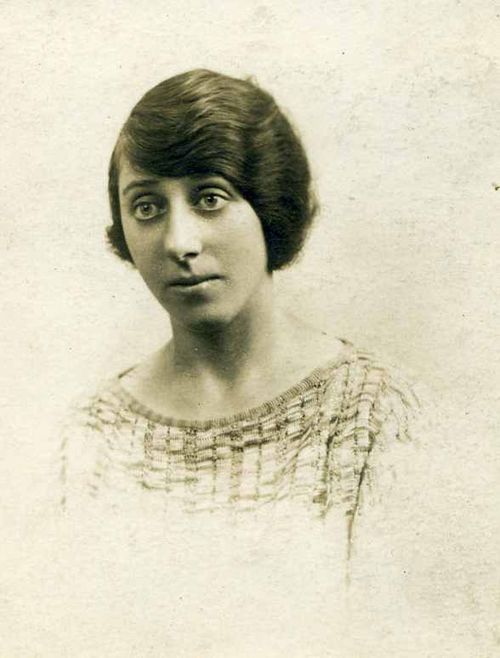 Tunks ended the war as a Lieutenant in the Australian Army Pay Corps. His eye-witness accounts of his experiences were published throughout the war in Parramatta’s local newspaper The Cumberland Argus and Fruitgrowers Advocate. He arrived home in July 1920 to be met by the Parramatta Welcome Home Committee followed by a special reception at his sister’s house:
‘Lieut. Keith Tunks, of Parramatta, one of the last left in England, was the honored guest at a welcome home held on July 7 at the residence of his sister, Mrs. C. Woods, of May's Hill. The decorations were festive and specially the table, which was arranged artistically with the Lieut.'s staff colors. Toasts were given in honor of the King and the forces, and reference was made to the valuable services Lieut. Tunks had rendered to his country and the Empire both in the field and later in the more intricate establishment of the Australian Headquarters Staff, where work was always plentiful and fatiguing; and the least service we could render him was to welcome him heartily and sincerely’ (The Cumberland Argus and Fruitgrowers Advocate,17 July 1920).

Further reading:
Discovering Anzacs – service record for Keith Aubrey Tunks
The Cumberland Argus and Fruitgrowers Advocate via Trove
Fighting Australasia: a souvenir record of the imperishable story of the Australasian forces in the Great War
Europeana 1914-1918

Posted by Margaret.Makepeace at 09:00:00 in Australasia , Women's histories , World War One