The Queen's visit to Karachi in 1961- the official view

The current visit of the Duke and Duchess of Cambridge to India perhaps provided an opportunity for them to talk to the Queen and the Duke of Edinburgh about their tour of the sub-continent in 1961, and to be reminded of the pitfalls that may arrive to upset months, if not years, of careful planning.

The 1961 visit was planned to coincide with a period of dry weather in the Pakistan winter, and avoided the monsoon season. Following a rain-soaked visit to the Taj Mahal, the Queen and the Duke of Edinburgh arrived in Karachi on 1 February 1961, and immediately embarked on a busy programme of visits, meetings and meals which are chronicled in the diaries of Lady Doris 'Dodo' Symon, wife of the High Commissioner in Pakistan. 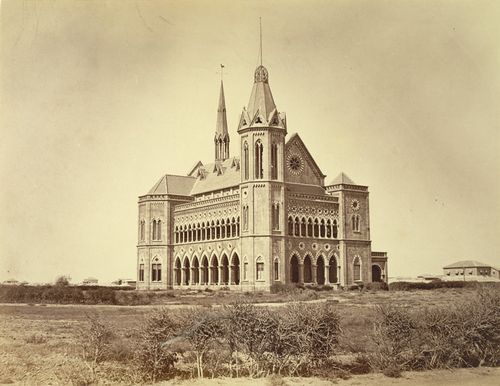 The official description of the reception at the State Guest House in Karachi on 3 February 1961, states:
‘A torrential thunderstorm, as unwelcome as it was unexpected, at this time of the year in Karachi, promised disaster for the joint Reception by the Commonwealth High Commissioners due to take place … on the lawns of the State Guest House. However, since the heavens began to open about an hour before the guests were due to assemble it was just possible, by the abandonment of all the meticulous plans evolved over several months in favour of a rule-of-thumb improvisation to accommodate the 1,300 guests under cover in a space large enough to hold only a quarter of that number…By various expedients it was also possible to give all the guests – none of whom had been deterred by the appalling weather – a chance of seeing the Queen and the Duke of Edinburgh, and all those persons whom it had been intended to present to the Queen were in fact presented’.

‘The Royal Guests, who were not in the least dismayed at the prospect of plunging into the scrimmage … In the event all concerned inevitably had a closer view of the Royal Party – and more had a chance of exchanging a few words with the Queen and the Duke of Edinburgh – than if the function had taken place under normal circumstances.’

‘Before the arrival of the Queen and the President about thirty of the guests who had ventured under the “shamiana” covering the lawn had been soaked to the skin by the collapse of the rain-soaked tentage. Several more, including members of the High Commissioner’s staff, got drenched in rescuing the victims.  It was a regrettable incident but it was no-one's fault and in magnitude bore no relation to the descriptive fantasies which appeared in certain British newspapers afterwards. The weather by now had turned the streets of Karachi into standing lakes and also brought snow to Quetta.’

The Times reported that ‘at last the shamiana subsided, drenching the guests and for a few hectic moments looking like a pantomime sea as it heaved with the struggles of the trapped’.

In our next post we’ll compare the official despatch with the memories of Madeline and Derek Morris, who were in the crowds under the shamiana.

Posted by Margaret.Makepeace at 9:15 AM