On 18 October 1914 a British officer named Lieutenant Fitzpatrick arrived at Bahrain bearing a letter marked ‘very secret’  for the Bahrain Political Agent, Captain Terence Keyes. The letter was from Keyes’ superior, Political Resident Lieutenant-Colonel Knox, and informed him that 5,000 Indian troops would be arriving in Bahrain in less than a week's time. 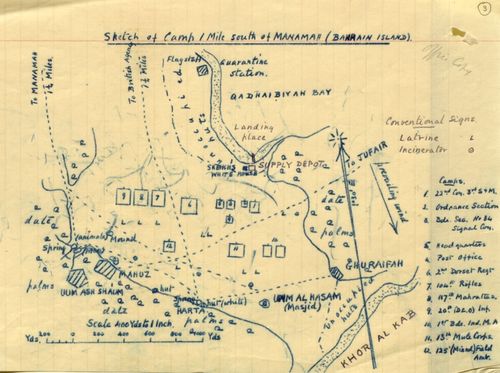 Keyes and Fitzpatrick had just five days to select a site on Bahrain’s main island, capable of supporting a camp for 5,000 men. The two men quickly set about identifying disembarkation points in the town for the troops and livestock, routes through the town’s narrow streets to possible camping grounds, water supplies and sanitation.

On the morning of 22 October, the Ruler of Bahrain, Shaikh Isa bin Ali Al Khalifah was informed of the plans. The Shaikh’s response, Keyes later wrote to the Resident, was ‘extremely satisfactory’. Shaikh Isa did, however, raise one point: the camp site selected, close to his own fort, would prove awkward in the following June, when his ‘own people’ had arranged to encamp in the very same place. 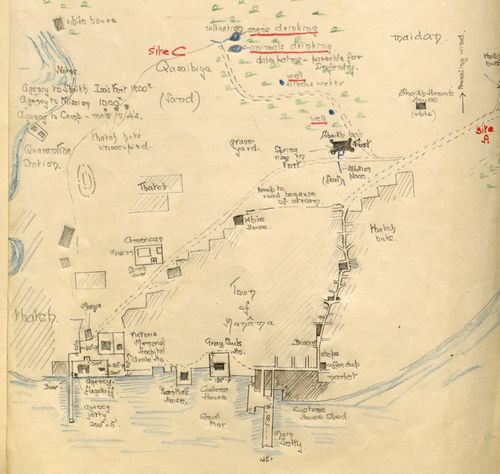 Extract of a sketch map indicating disembarkation points and route through the town to camp sites. IOR/R/15/2/1820, f 14.

Shaikh Isa’s comment alludes to the fact that the Indian troops bound for Bahrain – troops that comprised part of the Indian Expeditionary Force D, and that would go on to fight against the Turkish Army in the First World War’s Eastern theatre in Mesopotamia – were not working to any fixed timetable. Their stay in Bahrain was to be open-ended, entirely dependent on events in the war.

Unsurprisingly, the arrival of the transport ships and other military vessels off the Bahrain coast on 23 October 1914 was met with excitement and unease in the streets of Manama. Even though the vessels could hardly be seen from the harbour and wharves of the town – the convoy being moored more than three miles out because of the islands’ shallow coastal waters – there was much nervousness about their presence.

In spite of the support of Bahrain’s rulers and the most prominent Arab merchants in the town, Keyes wrote that ‘several deputations of Arabs endeavoured to work the Shaikh up against the landing of the troops'. They might have been encouraged by Herr Harling, Bahrain agent for the German company Robert Wonckhaus & Company. Harling, so Keyes claimed, was stirring up anti-British feeling amongst Bahrain’s Persian inhabitants, and conniving with ‘some minor member’ of the Al Khalifah ruling family. On 28 October Keyes had Harling arrested, with orders for his internment for the duration of the war.

Extract of a letter sent by the Political Agent at Bahrain, Captain Terence Keys, to the Political Resident in the Persian Gulf, 4 November 1914, describing the German Herr Harling’s activities at Bahrain. IOR/L/PS/11/86, P 4923/1914.

Meanwhile, the ladies of the American Mission were sent out on a charm offensive to allay the fears of the female inhabitants of Manama. In spite of all efforts though, Keyes had to concede that there was a growing sense of uneasiness and objection to the anticipated presence of the troops, in spite of all his efforts to dispel any concerns. Rumours abounding (reported by Harling in a letter sent to the German Consul at Bushire) that a further 15,000 troops were on their way to join the 5,000 already arrived at Bahrain doubtless did little to help matters. 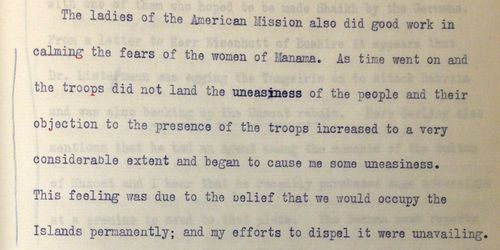 Ultimately, the 5,000 troops that anchored off the coast of Bahrain did not set foot in Bahrain. They remained on their vessels until 2 November, when they sailed to the Shatt-al-Arab, in response to Turkish hostilities against the Russian fleet in the Black Sea.

‘Bahrain: arrival of Expeditionary Force D; state of feeling on the island; intrigues of Messrs Wonckhaus, and his deportation’ IOR/L/PS/11/86, P 4923/1914.