Today is the 50th anniversary of Guyana’s independence, a country on the northern coast of South America. Formally known as British Guiana, it had a rich and diverse history. Journalist Lainy Malkani takes a look back at some archive newspapers with a remarkable link to one of the most expensive stamps in the world.

Judging by the variety of notices and adverts posted in the Royal Gazette in 1856, Georgetown, must have been a bustling and at times chaotic city. The proprietors of the printing shop, Messrs. William Dallas, Esq, who was one of a growing number of successful mixed-race businessmen, and Joseph Baum from Pennsylvania, were in the thick of it.

The search for ‘100 Hogshead of Sugar’, is just one of thousands of ‘Wanted’ ads placed in the newspaper, and leafing through just one day in the life of the city feels like time travel at its best. On Tuesday 4 March 1856, Rose and Duff wanted to purchase ‘100 Puncheons of Rum’ while a shipment from London of 600 tonnes of ‘shingle ballast, gravel and sand’ was available for any discerning developer to buy if they had cash at the ready. On other days, an advert announcing the arrival of ships from Calcutta, laden with bags of rice and mustard oil for Indian indentured labourers indicates the country’s increasingly diverse population after emancipation in 1834.

The Royal Gazette, later known as the Official Gazette was regarded as the voice of the colonial administration and Government announcements were frequently posted. Disturbances in the city led to William Walker, the Government Secretary to decree that a reward of $50 dollars for information that led to a conviction of the troublemakers, would be withdrawn and replaced with a $250 reward - perhaps it was a sign of the fragility of peace in the city.

The printing office was located at No23 High Street and Church-Street in the upmarket district of Cumingsburg and it printed more than just newspapers. In 1843, it published a ‘Local Guide of British Guiana,’ a compilation of all the current laws as well as an historical sketch of the city. 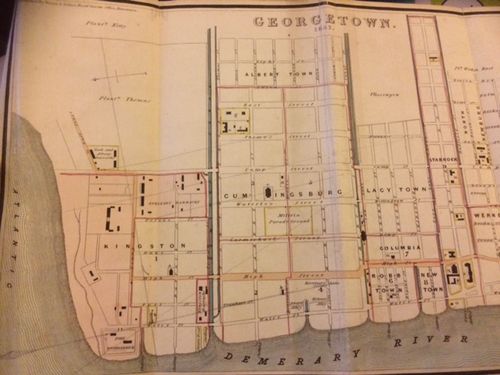 But perhaps their greatest claim to fame was not as printers of newspapers or books, but of stamps, and one in particular, which is now the most expensive and rarest in the world.

The story begins with a delay in the shipment of postage stamps dispatched from London to British Guiana. By 1856, supplies were running low and so the local postmaster ordered Baum and Dallas to print a batch of one-cent stamps as postage for newspapers and a four-cent stamp for letters. The last remaining One-Cent Magenta recently sold at Sotheby’s for $9.5 million and the Four-Cent Magenta and Four-Cent Blue form part of an unrivalled collection of rare stamps donated by the wealthy Victorian businessman Thomas Tapling, held here at the British Library. 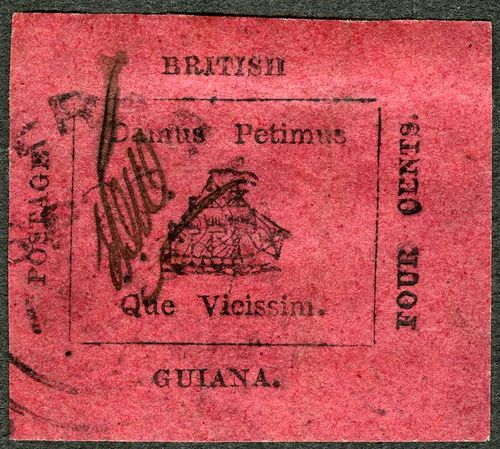 All in all, 1856 was a pretty good year for Baum and Dallas. The newspaper was now being printed three days a week instead of two, a sure sign that business was doing well. They had also, unwittingly secured a place in history as printers of the most valuable stamp in the world.