Today we continue our sad story of poverty and destitution in Victorian London by focusing on the Chivers family of Marylebone.

Robert Chivers was working as a painter when he married Elizabeth Moulder at Christ Church Marylebone on 20 August 1865. They lived in Duke Street, a small turning off Lisson Grove in a poor area.  Their son Robert was born in October 1865 and they went on to have three more children: Ann/Annie, William/Willie, and Thomas.

On 21 July 1868 Robert and Elizabeth were admitted to Marylebone Workhouse with Robert aged 3 and Ann aged 9 months. Little Robert was moved to the workhouse school at Southall in Middlesex on 14 August 1868. 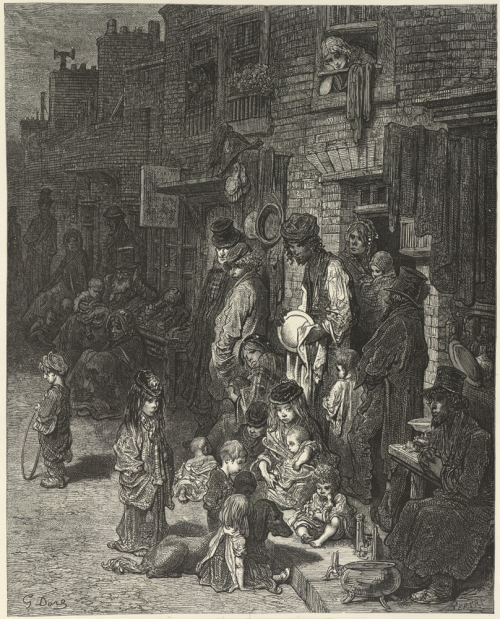 In January 1869 newspaper articles about Robert Chivers appeared under the headlines ‘A Violent Pauper’ and, with more than a hint of sarcasm, ‘A Model Pauper’.  Robert been taken to court for assaulting workhouse officer James Lockwood who had reprimanded him for not picking oakum properly. Robert complained that he had been insulted when he asked for an additional quantity of oakum to pick.  He had wanted to increase his earnings from 6d for a day’s work in order to support his wife and three small children. Having been unemployed since July 1868, he had asked the parish officers to grant him a few clothes to make him decent to apply for work outside.  His request was turned down because the Chivers family had been in and out of the workhouse for a long time and the overseer thought Robert lazy and sullen.  The jury found Robert guilty but recommended him to mercy because of his family.  He was sentenced to six months in the House of Correction.

Elizabeth Chivers also came into conflict with the workhouse authorities on more than one occasion  In April 1871 she was imprisoned for 21 days for disorderly conduct and using threatening language in the workhouse. The 1871 census shows Robert, Annie and William living at the workhouse school in Southall, and Elizabeth in the workhouse with four-month-old Thomas.  Robert senior seems to have disappeared and I have been unable to discover his whereabouts.

In July 1874 Elizabeth and her children were discharged from the workhouse so they could emigrate to Australia. Their ‘most distressing case of poverty’ was heard before the Melbourne City Bench in December 1874. Elizabeth said her husband had deserted her about four years earlier.  Her sister’s husband had been helping, but he could no longer afford to do so. Elizabeth applied to have her children admitted to the industrial schools but the bench was sympathetic and keen to keep the family together. Thomas was suffering from spinal disease and so he was remanded to the industrial schools for a month for medical treatment.  Elizabeth received £1 for her immediate wants, a charitable subscription was started with a £5 donation by the magistrate, and she was promised that ‘benevolent ladies’ would help her obtain a livelihood.

Unfortunately this story does not have a happy ending. Robert, William and Thomas were all living in the industrial schools by April 1875 when Elizabeth was summoned to pay towards their upkeep. The case was dismissed as it was shown that she was unable to contribute anything.  Thomas died in 1878 aged seven.

Poverty and destitution in Victorian London