To mark the start of the Euro 2016 football tournament in France, we bring you this picture from the 1820s which appears to be a game of keepy-uppy. 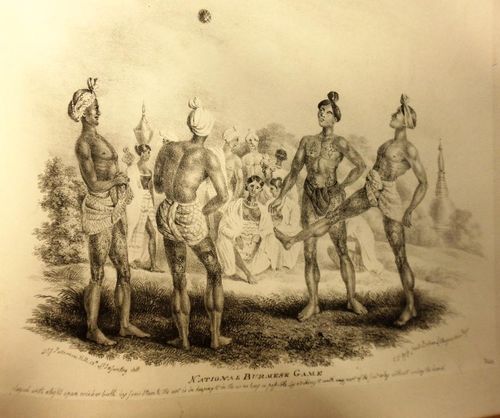 The caption reads ‘National Burmese Game - played with a light open wicker ball by four Men & the art is in keeping it in the air as long as possible by striking it with any part of the foot or leg without using the hand’.

The game is chinlone, a traditional sport dating back many centuries and still played in Myanmar today.  Players stand in a circle and keep the ball from touching the ground by flipping it into the air or passing it to one another. 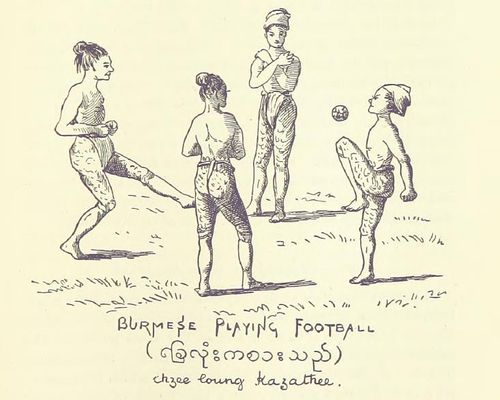 From Charles Alexander Gordon, Our trip to Burmah, with notes on that country  p.77

Surgeon General Charles Alexander Gordon witnessed chinlone being played when visiting Burma in 1875. He described it as football.
‘The ball is made of strips of rattan; it is in the form of a hollow sphere, and very elastic.  The players have literally girded up their loins, the better to leave their limbs completely free; both arms and legs quite bare, showing on the latter that extraordinary amount of tattooing for which the Burmese are specially famous.  The ball is tossed in air; the players keep it up and pass it on from one to the other; nor are they permitted to touch it with the hand.  Apparently, however, this is unnecessary; for knee, ankle, sole of foot, shoulder – in fact, any part of the body – is equally ready; and thus the game goes merrily on, amid much laughter and high good spirits.’

Wouldn’t it be splendid if commentators for Euro 2016 matches quoted that last phrase from Gordon after every crunching tackle?  ‘Thus the game goes merrily on, amid much laughter and high good spirits.’

Posted by Margaret.Makepeace at 09:00:00 in Leisure , South East Asia