In a previous post I wrote about the examinations held in 1880 by the India Office to find suitable candidates for the Indian Forest Department.  Once candidates had been selected they were sent to the French National School of Forestry, which had been established at Nancy, in north east France, in 1824, and was regarded as the premier school of forestry in Europe in the nineteenth century. 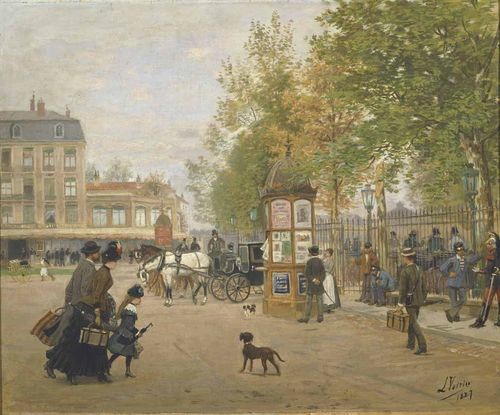 Station square in Nancy in 1887 by Jules Voirin - Images Online

On 27 August 1880, the India Office received a report by the Director of the Forest School on the eight English students who had entered the school in 1879.  For the India Office the report made disappointing reading.  Despite obtaining more than the minimum number of marks required to continue their studies at the School, the students occupied almost all the lowest places in their class, and were trailing behind the French students.  The Director of the School largely put this down to carelessness in their studies, and he was unable to mention one English student who had distinguished himself.

The file on this report in the India Office Records contains the individual report cards for each student, giving marks for each subject studied, and a note on the student’s general progress over the year.  Some remarks on the students would have made uncomfortable reading, both for them and the India Office.  One student, Mr Lillingston, was described as “a charming young man, but giddy, thoughtless and wanting in application.  He is not wanting in intelligence and has a good knowledge of French, but he does not seem to appreciate the importance of learning”.  Another student, Mr Carr, was “intelligent but wanting in energy; he is less attentive to the practical than to the theoretical part of his studies”.  Mr Brasier was “wanting in quickness and energy, but he is attentive to his duties, and in his practical exercises, he has shown a certain aptitude for forestry work”.  Mr Rawbone’s conduct was good, and he was described as fairly intelligent, with the potential to occupy a good position in his class if he would take the necessary trouble, but “he is soft, indolent, irregular and not sufficiently attentive to his studies”.

However, some students were reported on more favourably.  Mr Hobart-Hampden was described as “slow, but conscientious and industrious”, and he had conducted himself very well.  He was expected to take a good position in his class in the next year.  Mr Lace’s conduct was excellent, although he was too fond of being alone and consequently his French had not improved as might have been expected, and he had not done well in his viva voce examinations.

In response, a stern letter was sent to Colonel Pearson, the officer tasked with supervising the English students at Nancy, expressing the Secretary of State’s displeasure at receiving so unsatisfactory a report on the students’ progress, and requesting him to inform them that a more favourable report was expected on their progress the following year.

Posted by Margaret.Makepeace at 09:00:00 in Science and environment , South Asia , Work