An advertisement was sent to the Secretary of the East India Company in 1763 about the intended publication of a series of engravings of the Battle of Havana.  The views were to be taken from sketches drawn in 1762 by ‘the Inventor of the Machine for reducing stale and nauseous Water, sweet’. 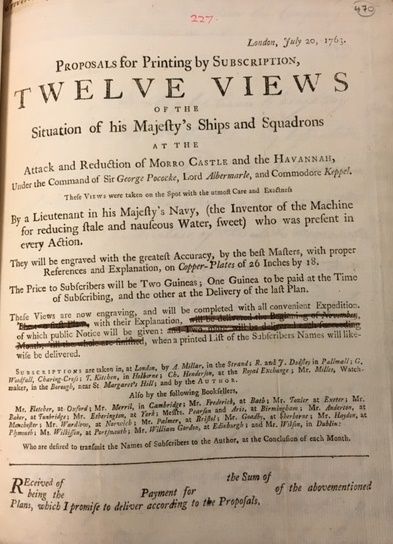 The artist and inventor was Elias Durnford (1739-1794), a civil engineer with the British Army, who is better known for his role surveying and developing a town plan for Pensacola in Florida.

Durnford was born in 1739 in Ringwood, Hampshire, the eldest son of Elias Durnford senior.  He trained as a civil engineer under John Peter Desmaretz of the drawing office in the Tower of London.  Appointed ensign in the Royal Engineers in March 1759, he served with the Royal Navy at the battle of Havana in 1762.  Durnford was appointed aide-de-camp to Lord Albemarle and was asked to draw a series of sketches of the battle, which were later published as announced in the advert. After Cuba, Durnford was sent to Florida as chief engineer and surveyor, where he was responsible for drawing up the town plans for Pensacola. In 1769 he was appointed Lieutenant-Governor, an appointment he held until 1778.

During his time in America, Durnford also designed a plan for a canal to run from the Mississippi to the town of Mobile. If it had been implemented the scheme would have been the first canal in America.  As well as potentially bringing new trade and settlement, the canal could perhaps have changed the course of the War. Military and political difficulties at the time however meant the proposal was never properly considered. 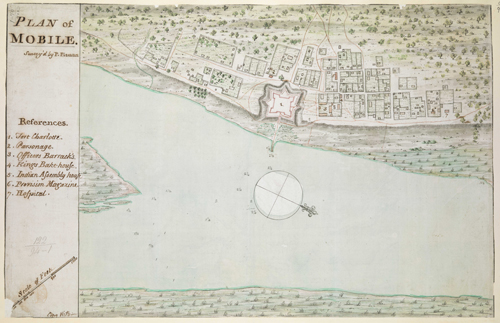 Durnford was still living in Florida at the beginning of the American Revolutionary War and was given command of Fort Charlotte at Mobile, a town near his estates. Durnford was heavily outnumbered during the war but refused to surrender the fort, believing relief would come from Pensacola. He eventually surrendered in March 1780 after having safely negotiated safe passage home for the English residents, and protection from persecution for the locals who had assisted him. His estates and plantation were however burned to the ground. 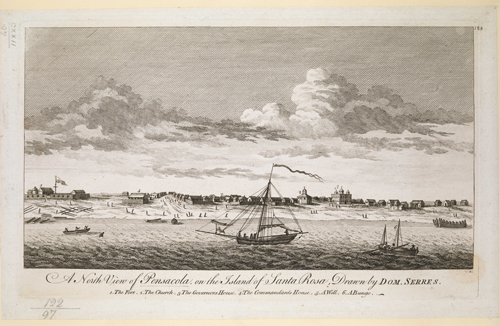 On returning to England Durnford worked on the ‘Makers Height’ defences at Plymouth Docks, before being appointed Chief Engineer in the Caribbean, where he eventually died of yellow fever on 21 June 1794.

Several of the engravings produced from Durnford’s original sketches are in the King George III Topographical Collection at the British Library. The Library also holds a copy of the published engravings from the 1760s.

I have been unable to discover anything so far about Durnford’s machine for purifying stale water. Was it a success?  Can any of our readers help?

Further reading:
IOR/E/1/45, f 470 - advertisement for a publication of engravings of the battle of Havana.
William Elliot,  A view of the Harbour & City of Havana.  Six views for Lord Albemarle, inscribed by Elias Durnford (London, 1764).
Maps K. Top. 123.28.a through to Maps K. Top. 128.28.f - The King's Topographical Collection holds the six engravings, produced from Elias Durnford’s original sketches, which were published between February 1764 and August 1765.
Add MS 16367 G - A coloured military plan of the attacks carried on by the English in 1762 against the city of Havanah and Moro Fort, surveyed by Lieut. [Elias] Durnford, 1762.
The National Archives hold the plans and drawings for the town of Pensacola; along with drawings and correspondence relating to the proposed canal from Mississippi to Mobile.