‘My present dreadful situation’: The perils of fame as an 18th century actress

Shakespeare in Ten Acts, our major summer exhibition for this year, tells the story of 400 years of Shakespeare in performance.  We tell the stories not only of the best known and most successful actors of the day, but also those who struggled to make a living and today have fallen from memory.

I curated the part of the exhibition showing women on the stage, from the unnamed first professional female actor who played Desdemona in Othello on 8 December 1660, right through to genderblind and genderqueer casting in the last few years. 18th century female actors typically came from difficult backgrounds and went on the stage through a lack of social options, and were discarded by theatre managers and the public when they became a little older.

The Folger Shakespeare Library has generously loaned us a number of items of memorabilia relating to female actors in this period. The cult of celebrity around the performers meant that women were evidently clamouring for domestic items such as a decorative tile with Jane Lessingham as Ophelia in Hamlet ... 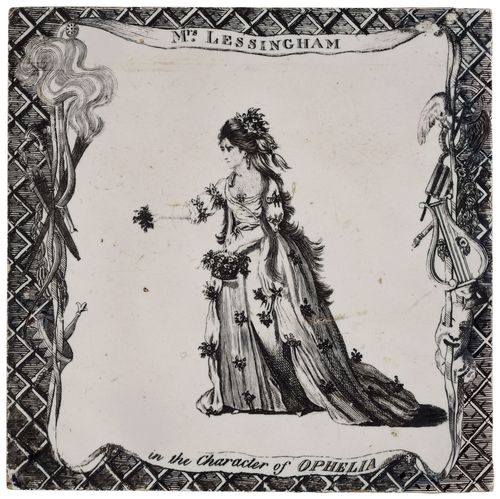 ...or a perfume bottle with Ann Barry as Constance in King John - ...or even an enamel medallion featuring George Anne Bellamy with David Garrick, as Romeo and Juliet - David Garrick and George Anne Bellamy in Romeo and Juliet. Based on a painting by Benjamin Wilson engraved by Ravenet. Enamel, ca. 1765 © Folger Shakespeare Library

I found George Anne Bellamy’s story the saddest. She was a star of the Covent Garden stage, particularly successful in romantic roles. She was extremely popular with the public, and when a rival actress was cast as Cordelia in King Lear, Bellamy arranged for handbills to be distributed to the audience, stating that the part had been taken from her the previous night but that she would ‘be ready in case I should, that evening, be honoured with the preference'. The crowd cried in her favour and she was waiting in the wings to replace her humiliated rival.

This might seem like an unsisterly act, but the stage was a cut-throat business for women and the crowds could be very fickle. Indeed by her late thirties, Bellamy’s fame was beginning to fade and she was plagued by gambling and lifestyle debts. She had also had three illegitimate children.

I uncovered three poignant letters written by Bellamy amongst the private papers of Robert Clive at the British Library. 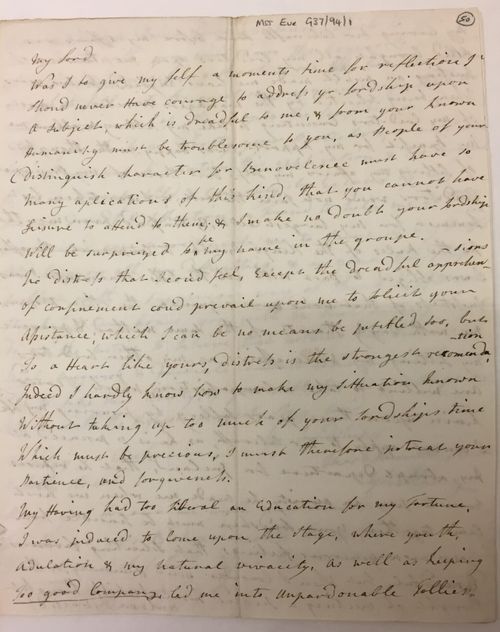 The letters date from summer 1767, when Clive had just returned from India for the final time. Bellamy, recently released from a debtor’s prison, wrote to him begging for money. In the first letter, she explains that  ‘My having had too liberal an education for my fortune, I was induced to come upon the stage where youth, adulation and my natural vivacity, as well as keeping too good company, led me into unpardonable follies’. She wrote two further letters in increasing desperation and concern that the letters had not been delivered properly.  On the back of each of the three letters, Clive or his secretary wrote the words ‘no reply’.

Most of these women are almost entirely forgotten today, while their male counterparts who acted with them – David Garrick or Spranger Barry – are still relatively well-known. It’s nice to be able to tell these women’s stories for a change.

More about our stunning Shakespeare exhibition and the programme of events