A dinosaur dinner and relics from 'one of the greatest humbugs, frauds and absurdities ever known'.

These are the words which Colonel Charles Sibthorpe (1783-1855) used to describe the Great Exhibition and Crystal Palace. His staunch opposition to any foreign influence, including a deep suspicion of Prince Albert, was the likely cause of his dislike of the Exhibition, which housed 13,000  exhibits from around the world. 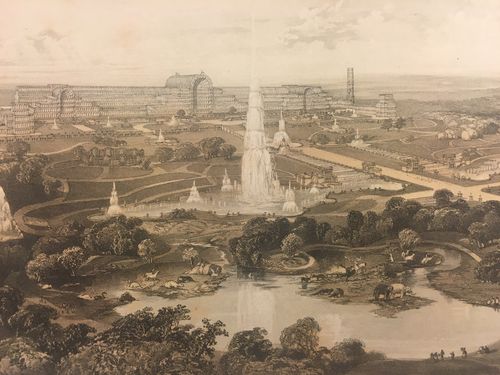 Hawkins was the designer and sculptor of the models of extinct animals and dinosaurs which were commissioned to stand in the grounds of the Crystal Palace after its move to Sydenham. To celebrate the launch of the models, Hawkins hosted a dinner on 31 December, 1853, inside one of the dinosaur models. 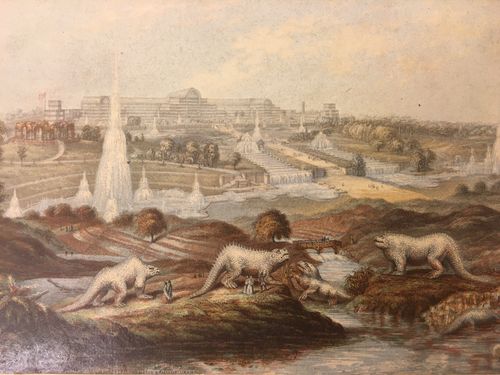 Trimmer had evidently asked Hawkins which dinosaur was the location of the supper party and Hawkins responded:

"In reply to your enquiry as to which of my models of the gigantic extinct animals in the Crystal Palace Park at Sydenham I had  converted into a sale á manger. I send you herewith a graphic answer in a miniature sketch of the Iguanodon as he appeared with his brains in and his belly full on the 31 of Decr 1853 and if you are further interested in the details of my whimsical feast you will find a good report in the London Illustrated News of July 7 1854 as its proprietor The late Mr Ingram was among the press of guests on that occasion; I had the pleasure of seeing around me many of the heads of science among whom in the head of the squadron was Professor Owen and the late Professor Ed forbes with eighteen other friends we were all very jolly to meet the new year 1854."

Hawkins' sketch of the Iguanodon shows a lively scene of people standing and raising glasses inside the body of the dinosaur. 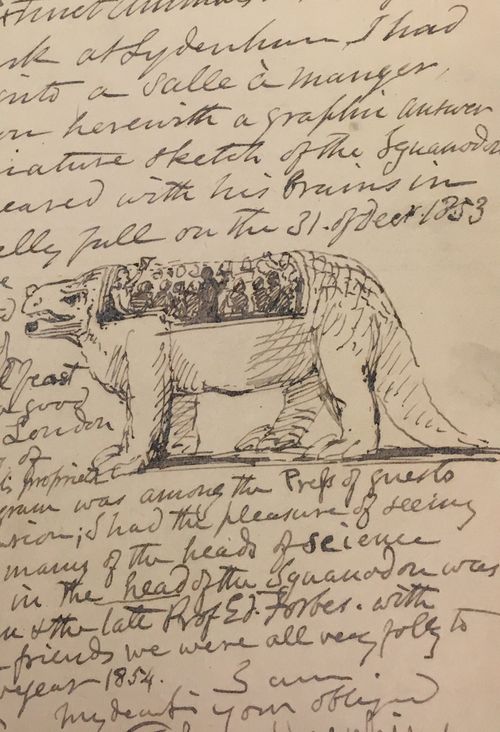 Detail of the dinner party held inside the Iguanodon, from Hawkins' letter to Trimmer, Add MS 50150.

The drawing is similar in composition to the wood engraving from the Illustrated London News which was taken from an original drawing by Hawkins, and shows the dinosaur surrounded by a wooden platform and steps. The dinosaurs remain in the Crystal Park today and are Grade I listed. There's a brilliant Friends of Crystal Palace Dinosaurs group who promote the long-term conservation of the models. A recent blog on the FCPD site shows images of the interior of the Iguanodon, the dinosaur in which Hawkins hosted his banquet.

Posted by Alexandra Ault at 8:33 AM