Could the Phoenicians, the ancient Mediterranean people who gave us the modern Latin alphabet and founded Carthage, have originated in Bahrain? A pioneering 19th century British archaeologist and his wife thought it possible.

Theodore Bent was born in Yorkshire in 1852. His marriage to landowner’s daughter Mabel Hall-Dare saved him from an intended legal career. The Bents shared a love of travel, and Mabel became a lifelong contributor to Bent’s work and writing.  Visits to Italy in the late 1870s were followed by extensive tours of the Greek Islands and Asia Minor in the 1880s, where the Bents developed a deep interest in archaeology. Bent’s researches led him to produce books and articles for both the popular press and learned journals.

In 1889 Bent visited Bahrain. Sir Henry Rawlinson, who had deciphered the cuneiform script of ancient Babylon, had recently suggested that Bahrain was the site of ‘Dilmun’. Sumerian poets had written of Dilmun as an abode of the blessed, the refuge of Ziusudra, the Sumerian Noah.

An entry in the Persian Gulf Administration Report, 1888-89, recording the arrival of the Bents in the Gulf and the start of their excavations amongst the ancient tumuli at Bahrain: IOR/V/23/56, No 259, f.51r

Bent’s excavations among the island’s ancient burial mounds led him to draw frequent parallels between the objects he found there and known Phoenician artefacts. His conclusion was that there had been close links between Bahrain and the Phoenicians, and that the Phoenicians might even have originated there. 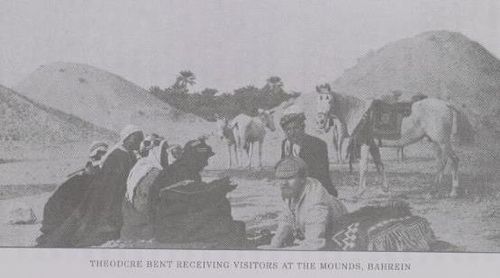 Bahrain was indeed the epicentre of the Dilmun civilisation of eastern Arabia, a maritime trading culture that flourished from the third millennium BC, before being absorbed by the Babylonians in around 600 BC. However, despite the fact that a tradition of the Phoenicians originating in Bahrain (the Greek Tylos) is as old as the historian Herodotus, modern archaeology finds little evidence to support the theory.

An entry in the Persian Gulf Administration Report, 1889-90, recording the opinion of Mr and Mrs Bent that their researches had confirmed the statements of ancient writers that the Bahrain Islands were the original home of the Phoenicians: IOR/V/23/58, No 274, f.201r

More journeys to southern Arabia followed in the 1890s, when the Bents did much to expand European knowledge of the Hadhramawt (Mabel becoming the first European woman to visit the area). They also visited Socotra and the little-known country around Aden.

Bent’s last journey was in southern Arabia in 1897. Here he and his entire party were struck down by malaria, which in Bent’s case turned into pneumonia. Bent died at his home in London four days after his return to England. In a memorial tribute Sir Clements Markham, President of the Royal Geographical Society, mourned a ‘very accomplished man, both as an archaeologist and geographer, a charming companion and a true friend’.

Mabel Bent saw the account of their Arabian travels into print as Southern Arabia, which was published in 1900. Her book has been described as ‘a classic even of the great age of exploration’.