On 10 November 1929 the Colonial Office received a letter from Philip Perceval Graves of The Times asking whether the Government held any information on a Danish author and traveller named Knud Holmboe.  Holmboe had written to The Times the previous day, briefly describing his plans for a trip across the Arabian Peninsula. He hoped to visit Palestine, Mecca, Medina and Oman, before reaching Aden.  Holmboe requested an appointment with the newspaper’s foreign news editor.  Graves told the Colonial Office that since he assumed that British permits would be required for parts of Holmboe’s proposed trip, it might be interested to know of the Dane’s intentions.

'[h]ow he means to reach Mecca and Medina is his affair and perhaps "it is his funeral" is all that need be said of that part of his scheme. The rest might be possible'.

Graves’s words would prove to be sadly prescient, although perhaps not quite in the way that he might have imagined. 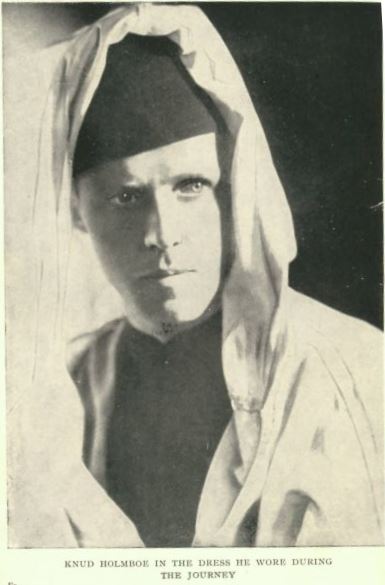 A fluent speaker of Arabic, Holmboe, who was born in 1902 into a Danish middle class family, had converted to Islam a few years previously.  He had already travelled extensively in the Middle East. The initial part of his proposed journey took him by car from Morocco to Libya, where he witnessed the shocking treatment that was inflicted upon the Libyan Muslim population by its Italian colonial rulers: thousands of Bedouins were imprisoned in concentration camps and summary executions occurred on a daily basis.  According to Holmboe, during his time in Cyrenaica there were thirty executions a day.

Holmboe was deported from Libya to Egypt, where he was imprisoned before being sent back to Denmark.  He recorded his observations in a book Ørkenen Brænder (English title: Desert Encounter), which was first published in 1931. In the book, Holmboe writes:

'[i]t became more and more clear to me that the Italians understood nothing of the soul of this people, of whom they had appointed themselves rulers'.

Predictably, the book was banned in Fascist Italy (it would not be translated into Italian until 2004) but sold well elsewhere in Europe. However, Holmboe did not live to enjoy his book’s success. Having returned to the Middle East in late 1931, intent on completing his pilgrimage to Mecca, he was killed in Aqaba, in modern-day Jordan, allegedly by members of a local Bedouin tribe in the employ of Italian officers, although this claim has never been verified.