Are you surprised when I tell you that women’s cricket was played in the 1700s? The first recorded match took place in Surrey on 26 July 1745 between teams from Bramley and Hambleton.

Here is the match report from the Derby Mercury of 9 August 1745:

‘The greatest Cricket Match that ever was played in the South Part of England, was on Friday the 26th of last Month, on Gosden Common near Guildford in Surrey, between eleven Maids of Bramley, and eleven Maids of Hambleton, dressed all in White, the Bramley Maids had blue Ribbons, and  the Hambleton Maids red Ribbons on their Heads; the Bramley Girls got 119 Notches, and the Hambleton Girls 127; there was of both Sexes the greatest Number that ever was seen on such an Occasion, the Girls bowled, batted, ran, and catched, as well as any Men could do in that Game.’ 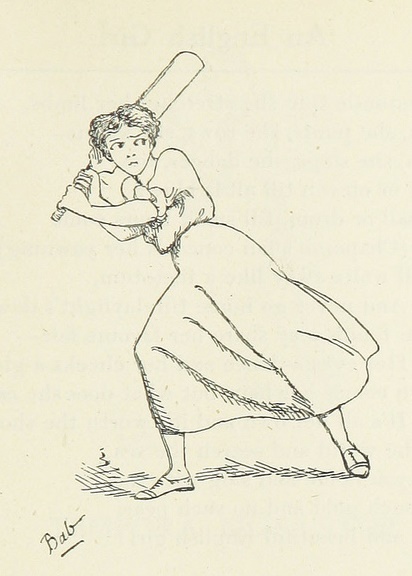 Nearly 150 years later, two teams of women were formed as ‘The Original English Lady Cricketers’.  The aim was to prove the ‘suitability of the National Game as a pastime for the fair sex in preference to Lawn Tennis and other less scientific games’.  The young players were carefully selected and went through a rigorous programme of training and practice. The elevens toured the main towns of the UK from 1890, putting on exhibition matches in a ‘select and refined’ manner.  The women were ‘elegantly and appropriately attired’, and accompanied by a matron at all engagements.

Advertisements for the tour described the Lady Cricketers as a ‘Genuine Novelty’ but stressed that the entertainment was ‘Sport not Clowning’.  The women were ‘Refined Lady Athletes, not Burlesque Masqueraders’. 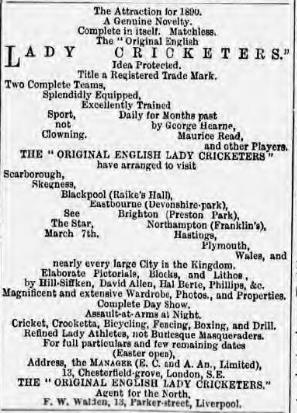 Newspaper commentators greeted the formation of the troupe with some cynicism. One widely published report was condescending about the forthcoming matches: ‘when scrambling across the pitch to steal a short run, we fear that dignity and elegance can with difficulty be preserved.  The appearance of pads beneath a short skirt is very clumsy.  It will be curious, again, to see how many of the team can throw properly, without causing the ribald populace to snigger.  Of one thing there can be no doubt, that these lady cricketers are brave, very brave women, and also highly original’.

Posted by Margaret.Makepeace at 09:00:00 in Leisure , Women's histories , Work