Words will eat themselves

There is something romantic and tragic about iron gall ink. It has allowed the most beautiful words to take form. The best and the worst words. Dull and incidental household inventories; execution warrants for kings; orders for wars; scientific discoveries; declarations of love. And some of the most incredible poems, prose, songs and stories known to man.

And yet iron gall ink is slowly destroying itself and the paper on which it sits. Words are literally eating themselves into oblivion. Even the ink's composition and ingredients are a result of irritation and death. A sting; a bite; a reaction; a tiny extinction. 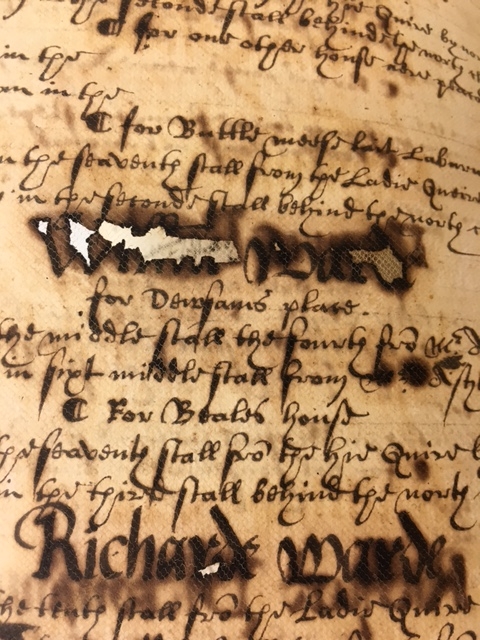 I recently attended an Iron Gall Ink Study Day with our brilliant Conservation Department. Three of our conservators have made a study of the ink and their knowledge and research on the subject is amazing. The following are a few images from the day and some manuscripts which show iron gall ink damage. 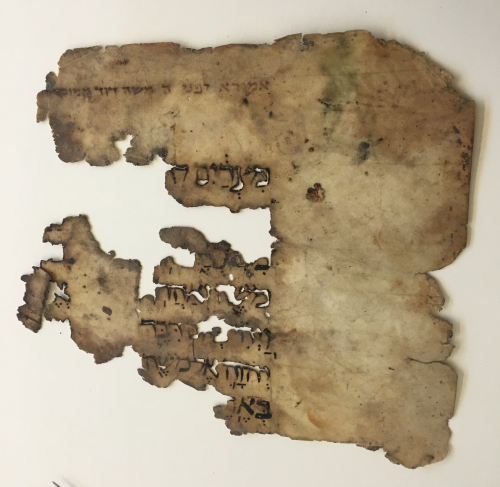 Example of iron gall ink damage on a vellum manuscript.

Iron gall ink is made from tannin (most often taken from oak marble galls), vitriol (iron sulphate), gum and water. The galls are a tree's reaction to the eggs laid by tiny wasps. The galls serve to protect the little wasps as they develop. One of the galls I picked up had the body of the wasp lying next to it. It must have emerged from the hole in the gall and expired almost immediately. Allegedly, the richest tannin was produced when the body of the wasp was trapped inside. The best galls were apparently from Aleppo as they have three times as much tannin as British galls (at only 17%). 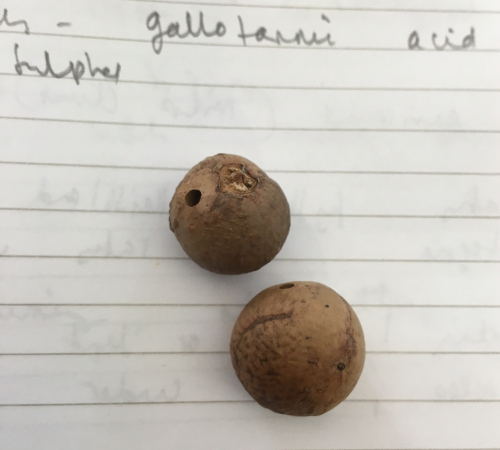 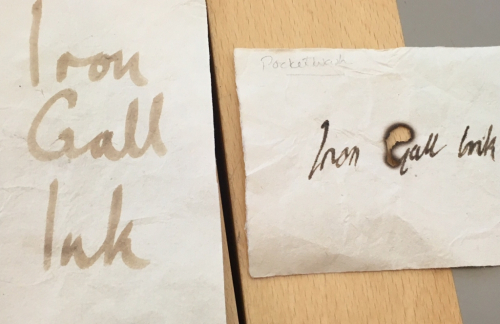 Same iron gall ink but applied with a brush (left) and a metal nib (right).

Similarly, the composition and recipe of the ink affects just how much damage it inflicts. A balanced recipe is more likely to be stable than one which contains larger proportions of gallotannic acid or iron sulphate. Here's a link to just one recipe for the ink. There were hundreds if not thousands of recipes in use at any one time. 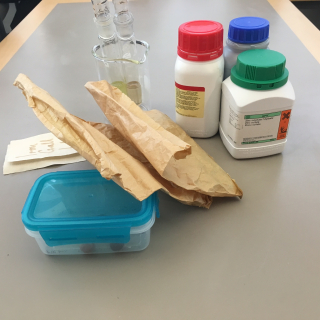 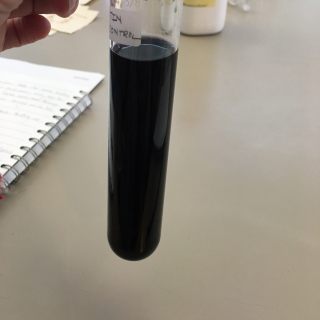 Ingredients in iron gall ink (left) and the colour of the iron sulphate and gallotannic acid when mixed together (right).

Why, then, if the damage was evident, was iron gall ink in constant use until relatively recently? It was probably because paper (and indeed vellum) were of good quality up until the mass production of paper in the eighteenth century. Once the paper quality decreased, the effect of iron gall ink was particularly noticeable. Indeed, the most damaged manuscripts I have seen date from the nineteenth century. Wilkie Collins was a particular horror as he scribbled out his lines constantly. The paper on which he wrote was incredibly thin. Much of his manuscripts flake in places where he has crossed out. 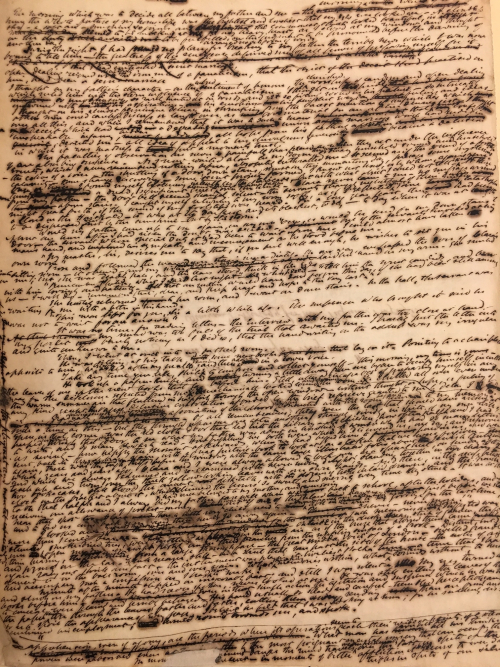 The ink's path of destruction moves in three dimension. It creeps through entire text blocks consuming the innards of volumes. Until recently, nobody knew that it was both the tannin and the iron sulphate which were damaging. Our Conservation Team are constantly looking at ways to stabilise, treat and better understand iron gall ink. But even then, they say that there is no stopping time: iron gall ink will eventually destroy the prose, poems, letters and warrants. Vitriolic words indeed.

To find out more about our Conservation Department their blog is here and their web pages are here.

Posted by Alexandra Ault at 11:43:45 in Literature , Manuscripts