A British First World War hero with roots in India

The India Office Records are able to shed some light on the sadly short life of a World War One military hero.

Rex Warneford was commissioned as a Sub-Lieutenant in the Royal Naval Air Service in February 1915. After the obligatory period of training, late on 6 June 1915 he took off from an Allied air base at Dunkirk to attack Zeppelin sheds outside Brussels. Becoming separated from the rest of his squadron, through the darkness he made out the forbidding shape of an enemy craft, Zeppelin LZ-37. Shots from his rifle and pistol did no damage, so he tracked it for more than an hour before steering his plane above and taking the opportunity to drop six twenty pound bombs. Most of the crew were killed in the ensuing explosion.  Unfortunately a number of Belgian civilians died on the ground when the vessel crashed to earth. 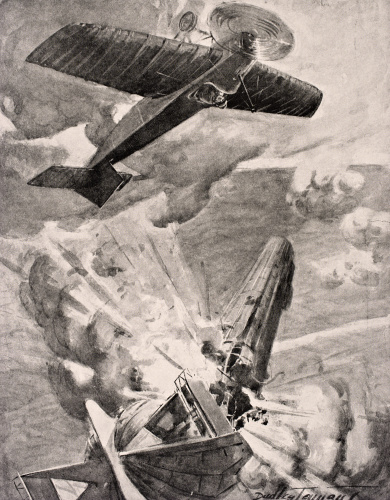 Running low on fuel, Warneford was forced to make an emergency landing miles behind enemy lines before taking off again and landing safely mid-morning on 7 June. He was the first British pilot to destroy a Zeppelin single-handed. Recognition was swift, and his award of the Victoria Cross was gazetted on 11 June.  It was announced that he would also receive the French Legion d’honneur.

Tragically, only six days later Rex was killed in a flying accident on his way from Paris back to Dunkirk. He was buried in Brompton Cemetery on 21 June.

Belgium has honoured him with ‘Reginald Warnefordstreet’ in Sint Amandsberg, Ghent.

Posted by Margaret.Makepeace at 08:30:00 in South Asia , World War One