A forgotten story from the Second World War

Regular readers of this blog know that the India Office Records contain all kinds of documents on individuals both famous and unknown.  One fascinating file about ordinary people is the ‘Nominal roll of Japanese internees in the Internment Camp, Deoli (Ajmer), who are willing to have their names communicated to their government’.   Ajmer-Merwara was a province in British India, within the princely state of Rajputana in the north of the country. The document is far more than a mere list of names.  It provides biographical details of more than 2000 individuals arranged in alphabetical order who were unlucky enough to be in the wrong place at the wrong time when war was declared between the Japanese and British Empires.  While there are no photographs, the file records the name and nationality of the internee (almost all Japanese, but including some ‘Malayan’), the date and place of birth, occupation, date and place of arrest, and relationship and address of next of kin. The great majority were interned during December 1941 in Singapore and Malaya, although a few were picked up in Burma and in India itself. Gender is indicated by (M) or (F). 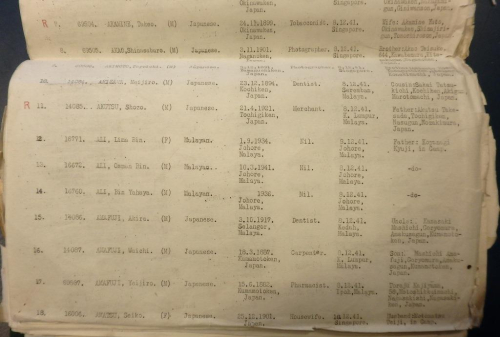 Dozens of the internees were fishermen, but there are housewives, students, barbers and tailors, as well as -

Some individuals deemed harmless to the Raj and the Allied war effort are recommended or nominated for repatriation. The oldest person is probably broker Katsujiro Murashima, who was born on 26 August 1874 in Osakafu. Poignantly, several children are listed as having been born in the camp late in 1943.  A few entries are scored through in red to show that the individuals died while in captivity.

There are details of five ‘Siamese’ nationals in the camp, one a monk. The file ends by listing three  husbands of British women who were arrested between July 1940 and June 1942 in London, plus a further five persons who were picked up in Britain’s East African colony of Kenya in December 1941.

The file reference is IOR/L/PJ/8/405, and it can be ordered for consultation in the Asian & African Studies Reading Room.