During the First World War soldiers needed entertainment; a distraction, something to brighten up their time away from the front line. There were journals to write, plays to perform, even a moving cinema. There was also gardening to do. In places that had extra land, and were in a (reasonably) secure location, soldiers grew anything from turnips to tomatoes.

On 5 May 1917 the British Expeditionary Force, Base 1, situated in Le Havre, in recognition of this, sent word to all units permanently stationed in the region ‘to cultivate all vacant land for the production of vegetables, and to encourage the continuity of this work, the Base Commandant proposes to hold a “vegetable show”’.

The type of troops that were stationed in Le Havre supported soldiers who were in the thick of it. There were Convalescent Camps, a Rest Camp, and the Army Service Corps Base Depot. There was an international flavour to the Base, as the Canadian Veterinary Hospital, the Australian General Base Depot and the Chinese Labour Corps were also stationed there.

All units were encouraged to enter the show, as were the Belgian military and French civilians (French troops were excluded). Those wanting to enter could choose to display nearly any vegetable, lists of categories were sent around beforehand and included potatoes, radishes, and kale. There were also general categories, such as flower arranging, or an award for the best garden.

The show was held on the 14, 15 and 16 August in a local garden (Jardin St Roch). Regimental bands provided musical entertainment each day and the event was advertised in a local newspaper (the Havre Éclair). On the last day of the show prizes and medallions were awarded to the best in each category in an awards ceremony. 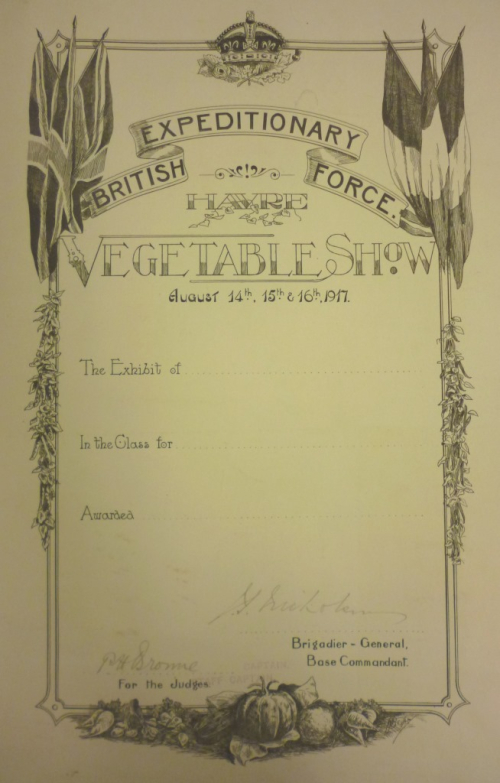 A letter from Captain P.H. Browne informs us that this certificate for the 1917 show was engraved by a soldier who in his civilian life was a clerk at a gas company.

In spite of ‘deplorable weather’ 9,000 people visited over the three days. Officers had donated money to pay for the show and prizes, to allow all profit to be given to the needy. The money raised amounted to 3,000 francs, which was donated half to the British Red Cross, and half to the French Oeuvres de Guerre.

In the second year of the show 11,000 people visited, and nearly 4,000 francs were raised. This year an extra competition was announced, to see who could produce the most vegetables per acre throughout the year. A Depot Company of German Prisoners of War won, with an average of 26 tons of vegetables produced per acre (compared to the 2 tons produced by the lowest ranking units). 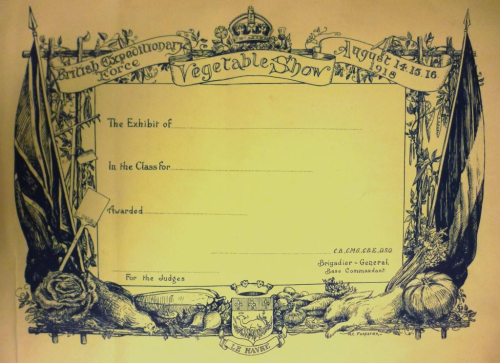 This 1918 certificate shows the inclusion of poultry and rabbits into the competition.

The shows could become rather competitive. Miss J M Wilson, a volunteer with the YMCA in Le Havre during the war wrote in her memoirs about a garden she cultivated. She described one vegetable that reached an ‘enormous size’ which they hoped to compete with in the show, but it was stolen, and there was a rumour that the thief exhibited it as his own.

The British Library has a collection of letters and ephemera about these shows, all donated at the time by senior ranking officers, and now in a guard book volume at shelfmark Tab.11748.aa.4.(88-117), which is where the information for this blog originated. They also donated copies of the victory medallions which are currently on display in the First World War gallery at the Imperial War Museum.

Posted by Margaret.Makepeace at 08:30:00 in World War One