One morning in May 1944, the British Adviser to the Government of Bahrain, Charles Belgrave, was wandering amongst the stone burial mounds near the Bahrain village of A’ali.  He noticed ‘an elaborate stone crushing’ machine set up on one of the largest and most-valued stone monuments.  ‘I consider it most improper’ he complained in a letter to the British Political Agent, ‘that [the A’ali tombs] should be interfered with’. 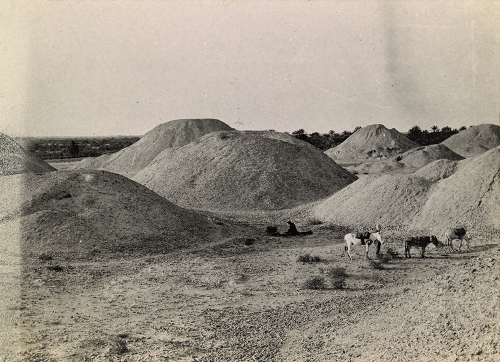 Enquiries revealed that the Royal Air Force (RAF) was the culprit, and was taking stones from A’ali for use as construction materials at their air base at Muharraq.  The RAF’s Air Liaison Officer in Bahrain conceded that the Air Ministry’s ‘lack of historical knowledge’ of the area meant that ‘one heap of stones was as good as another’.

Belgrave’s objection was not without a touch of hypocrisy. Seven years earlier, in 1937, he himself permitted the demolition of several mounds to make way for a new road on the island. On cutting through the condemned mounds it was discovered that they had been hitherto untouched, with skeletons and grave goods, including pots, dishes and other metal and glass objects all found inside. 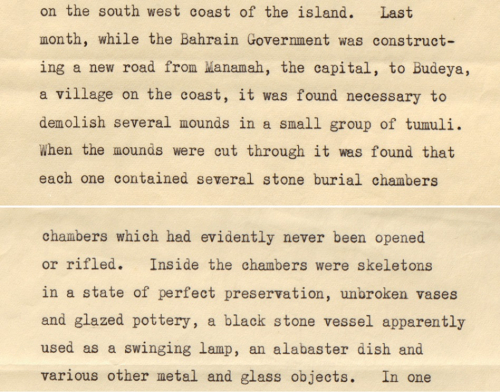 Bahrain’s burial mounds, assumed in Belgrave’s time to have been created by the Phoenicians, are now known to date from the Dilmun civilisation that inhabited the region between 4,000 and 500 BCE. Documents in the Qatar Digital Library record the encounters that British explorers and archaeologists had with the mounds from the latter half of the nineteenth century onwards.

Edward Law Durand was the first to come across the mounds in 1879, while exploring Bahrain in his capacity as First Assistant to the Persian Gulf Resident. He drew sketches of the structures and wrote: “This large series of mounds packed together, and of regular rounded shapes, cannot be the ruins of houses, as asserted by the Arabs, tombs they simply must be”. Durand’s report, which offered the tantalising prospect of relics and other treasures in the tombs, prompted the British Museum to subsidise excavation works to the cost of £100. A decade passed before any more excavations of note took place, this time under the guidance of Theodore and Mabel Bent, in February 1889. The Residency Agent at Bahrain reported back to the Resident on the Bents’ excavations, writing of earthenware finds, and bones and ‘a greasy earth of dark colour’ that ‘belonged to a human body'. 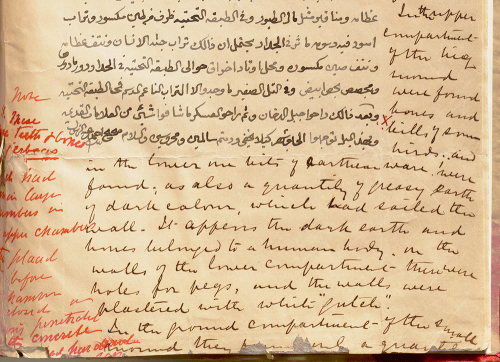 Extract of a letter (Arabic, with English translation) from the Residency Agent at Bahrain, on Theodore and Mabel Bent’s excavations at Bahrain, 20 February 1889. IOR/R/15/1/192, f 98

Bahrain’s burial mounds have been repeatedly excavated ever since, for example by British Political Agents Colonel Francis Prideaux, between 1906 and 1907, and Major Clive Daly, between 1921 and 1926; the British archaeologist Ernest Mackay in 1925; a Danish archaeological team in the 1950s; and the Bahrain Department of Antiquities in the 1970s.

The protection and understanding of the burial mounds at Bahrain was paramount to Bahrain’s first National Museum, which opened in the Bahrain Government’s headquarters in 1970. The museum’s later move into a building that had formerly been the RAF Officers’ Mess at the Muharraq air base is not without some irony, given the RAF’s earlier attempts to use the burial mounds’ stones as construction materials.

Posted by Margaret.Makepeace at 08:30:00 in Journeys , Middle East , Qatar