Rescue of an Indian Seaman

On 23 July 1924 the Under Secretary of State for India received a letter from T W Moore, Secretary of the Imperial Merchant Service Guild.   Moore informed him of the rescue of an Indian seaman, bringing to his attention the prompt action taken by Captain Robert Greenhill Hanna of the merchant ship S S Mathura, which had been steaming from Calcutta to Colombo at the time.  The Guild felt that Captain Hanna was to be highly commended for his determination to do all that was in his power to save the man’s life.  They believed that the India Office or the Government of India might like to show their appreciation in some way. 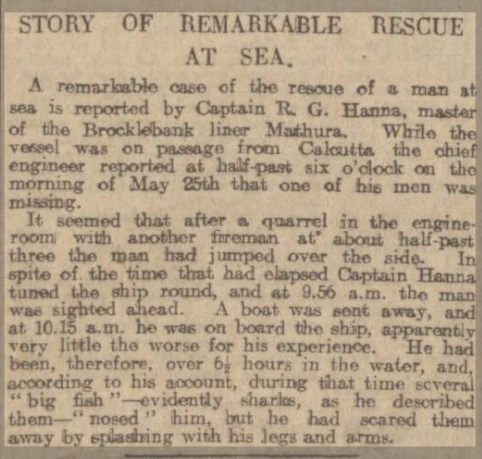 The curious, and almost fatal, incident began in the early hours of 25 May.   At 6.30am the Chief Engineer of the Mathura reported one of his men missing, a 3rd Fireman Tindal.  On investigation it turned out that after a quarrel in the engine room with another fireman at around 3.30am, the missing man had deliberately jumped over the side!

No one on board had witnessed this, and the ship had continued on its way with its crew unaware of the seaman’s rash action.  Captain Hanna immediately ordered the ship to be turned around, and a search was undertaken on the course opposite to that she had been steering.   At just before 10.00am the man was sighted in the water, and a small boat was sent to fish him out.  He had been in the water for almost 6½ hours, but seemed very little the worse for the experience.  Alarmingly he reported that while in the water he had several times been “nosed” by what he described as “big fish”, very probably sharks, but he had scared them away by splashing with his legs and arms.  His rescue was even more remarkable as the ship had steamed about 78 miles from the time the man entered the water to being picked up again, and the ship’s log shows that the weather at the time was overcast with heavy rain. 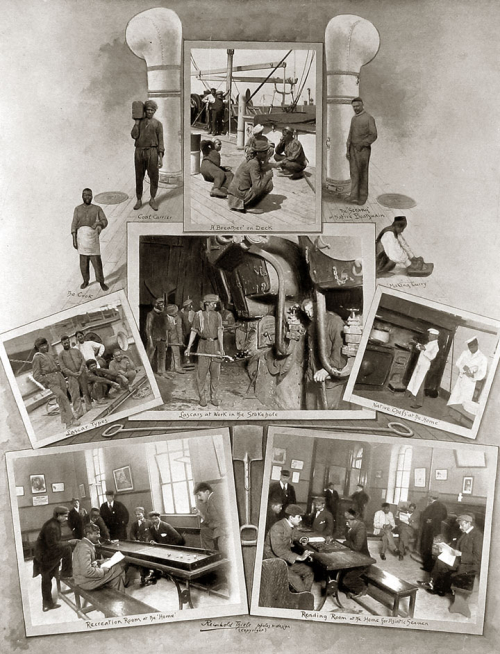 Collage featuring lascars at work and in their lodgings on shore, Illustrated London News, 1906. Shelfmark: P.P.7611

SS Mathura had a mostly Indian crew, and it was reported that they were delighted at Captain Hanna’s actions to save their crewmate.  The Secretary of the Guild felt that the incident might be useful to the Government of India in demonstrating to the Indian population that a human life at sea was reckoned by a British shipmaster to be of equal importance, irrespective of colour or station in life.  For his excellent piece of seamanship, Captain Hanna was presented with a gold cigarette case by the Governor of Bengal at a police parade at Lal Bazar Police Headquarters, Calcutta, on 21 January 1925.