When the London-based merchant Thomas Pickstock (1792-1864) presented his son George with a travel journal recounting his '91 days ramble’ in France and Belgium between July-October 1843, he expressed the hope that the recipient could find it 'amusing...however unconnected as you’ll find it throughout'. 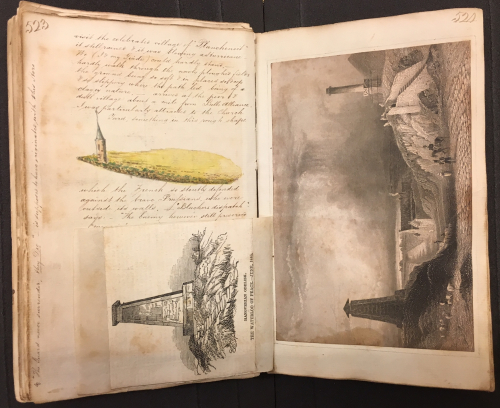 The concern expressed by Pickstock was not completely unjustified. His journal, far from being a neat and systematic account of his adventures abroad, appears like a scrapbook. Nearly every page presents a mixture of manuscript, drawing and printed material. Pickstock did not simply rewrite his travel annotations in a fair copy. Instead, he took great care in illustrating his writing with several watercolours and the keepsakes that he collected during the trip. 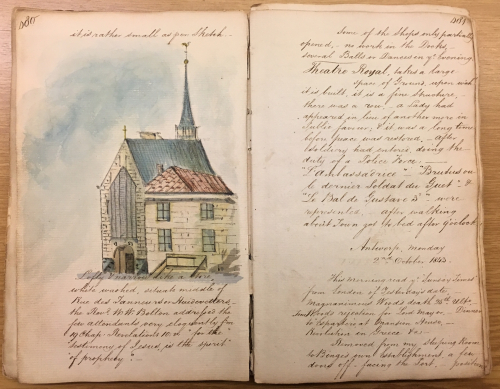 Towards the end of his travels, Pickstock visited the battlefield of Waterloo. This was an experience that struck him ‘with ideas and sentiments…impossible to record, or give a fainting idea of’. Though perhaps difficult to convey with words, Pickstock’s emotional response to this experience can be grasped thanks to the numerous pieces of ephemera relating to the battle inserted into his journal: business cards for tour guides, engravings, maps, and even a note from his uncle, who had visited the battlefield years earlier and had brought home a branch taken off the famous tree under which the Duke of Wellington allegedly held his headquarters. When Pickstock visited the field the tree was not there anymore, as it ‘was removed and transported to England by an individual who purchased the right to do so’. 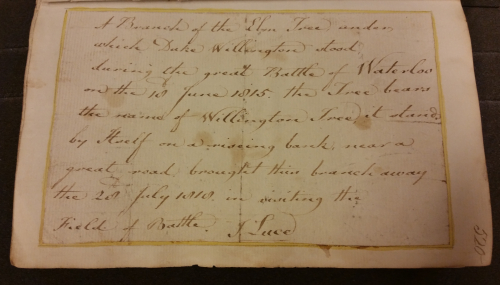 The popularity of Waterloo as a morbidly fascinating tourist attraction resonates in Pickstock’s narration of his visit, which included an encounter with ‘a peasant ploughing and expecting to find bullets’ and an instructive visit to the tour guide’s hut, ‘full of Skulls and other Bones with Sabres for sale – all gathered by his own Children from the fields’. 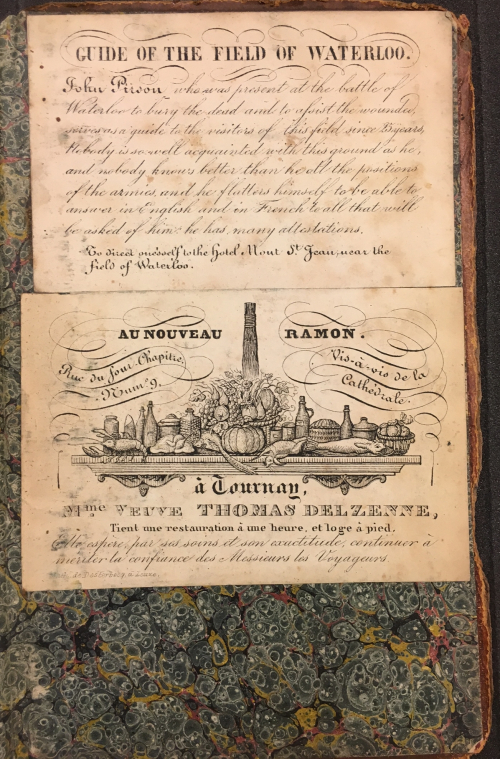 The narration of Pickstock’s adventures is enriched with a meticulous recording of his expenses during his three-month-long journey and an explanation of the differences between the French and Belgian currencies. This attention to budgetary matters might be explained by the financial misfortunes experienced by the merchant during the summer of 1841, when he very narrowly escaped bankruptcy. 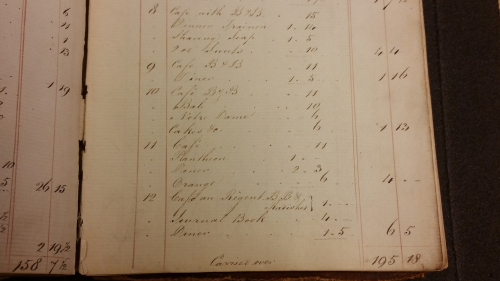 Although Pickstock feared that the slightly overwhelming amount of information that he packed in his journal could deter his son from reading it, he also cautiously envisioned that there would be others which ‘might take some pleasure in perusing the same’: an invitation that can now be accepted, as the British Library recently acquired the third volume of Pickstock’s travel journal and it will soon be available to consult under the reference number Add MS 89188. 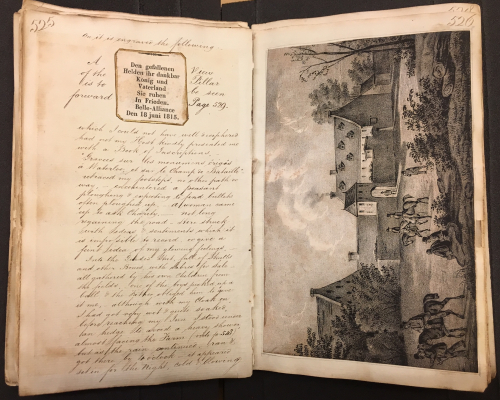