Sometimes a single page captures a small life. Here John McCosh, East India Company surgeon in Assam in the 1830s, recalls an unusual pet. McCosh was reporting to the Government of India on the topography of Assam. Topography encompassed history, geography, people, customs, economics, and natural history: indeed, anything which a reporter on an area thought worth recording. This topography would have been a valuable work of reference for government officials. But two centuries later, it is the unexpected glimpse into McCosh’s domestic life which stands out. ‘I once had a pet porcupine at Goalpara, I got him or her (for I could never use the freedom of ascertaining the sex) when very young.  It afterwards became so tame as to run out and into the house like a dog, and was wont to make its appearance regularly at meals, and ate from my hand any thing that was at table, whether flesh or vegetable.  It had a great deal of comic humour if I might so call it, and whether to gratify this whim, or from love of stolen treasure, became a great thief.  Nothing that it could carry away was safe; a stick or a shoe, a boot-hook or a broken bottle, was dragged to its nest, but as it never meddled with any thing that was not on the floor, we were easily able to keep things out of its reach.  Latterly this habit became very inconvenient; if any thing fell off the table and was neglected, it was certain to be carried off.  On searching its hoard the lost article was frequently found, but I had sometimes reason to think, the porcupine was blamed for taking away things he had no share in.  It became the torment of the dogs, and was wont to take a fiendish pleasure in pricking and annoying them.  It had a large share of courage, and in fair field was more than a match for any one dog, for it had only to keep its tail towards him to save its head, the only defenceless part about it; sometimes two dogs set upon it at once, and on such occasions it took to its heels, but it only ran to the nearest corner of the room and spreading out its quills, so as to fill the corner, looked back at its persecutors with cool contempt.’ 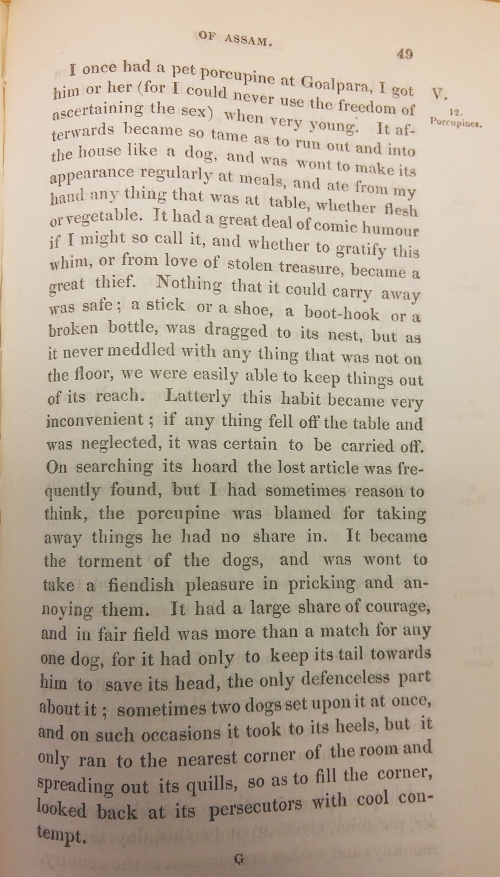 Posted by Margaret.Makepeace at 09:57:01 in Domestic life , Science and environment , South Asia

Posted by Margaret.Makepeace at 9:57 AM