‘A most fearefull and dreadfull fire’

The directors of the East India Company did not hold their regular meetings at the start of September 1666.  They were caught up in the Great Fire which started its devastating sweep through the City of London on the morning of 2 September. 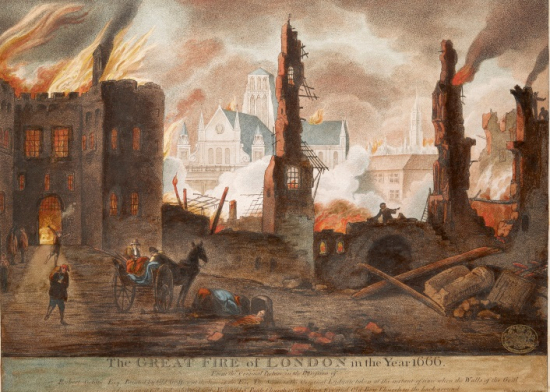 View of the Fire of London Maps K.Top.21.65.b Images Online

East India House in Leadenhall Street stood about 400 metres from the seat of the fire in Pudding Lane.  Books, papers, goods, and treasure were hurriedly removed for safety to outlying Stepney.   The fire damaged the western front of Leadenhall Market but was stopped just short of East India House - firefighters were spurred on by a City official tossing them a hatful of gold coins.

‘It pleased God that, on the 2d of this moneth, being Sunday, in the morning, a most fearefull and dreadfull fire brake forth, which hath consumed the greatest part of the citty of London, even from Tower Dock to Temple Barr, and almost all within the walls, except part of Marke Lane, Bishopsgate Streete, Leadenhall Streete, part of Broad Streete, and some by the Wall toward Mooregate and Criplegate and part by Christchurch.  The sight whereof was exceeding afrightening and astonishing. In this sad calamity God was pleased to bee very favourable to the Companies interest, having preserved most of our goods, excepting some saltpeeter and our pepper at the Exchange sellar.’
(East India Company directors’ letter to Surat 14 September 1666)

This map shows just how close the flames came to East India House. 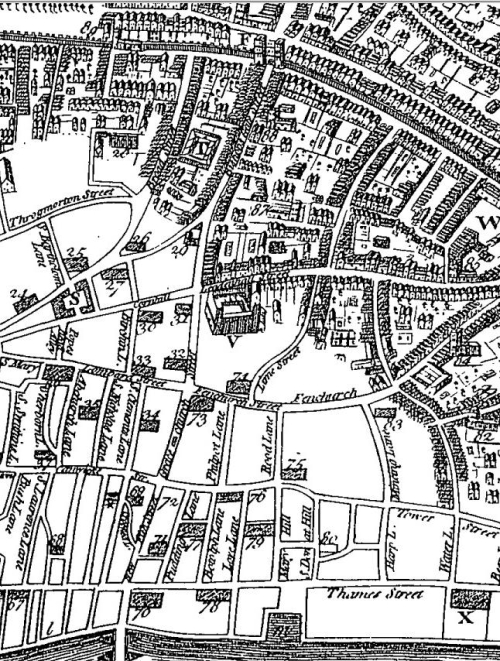 Section of map showing area of fire damage from John Noorthouck, A new history of London, including Westminster and Southwark.(1773)

On 10 September a smaller than usual number of Company directors met at East India House.  Those who had overseen the removal of the property were thanked ‘for their indefatigable paines, and sympathie of the Companies concern’.  Rewards were given for services ‘in the late time of extremitie, when a total ruine was feared by the violence of the flames’.

Orders were given to bring everything back to the City.  Buyers who had suffered financial losses in the fire were given extra time to settle their accounts.  Tradesmen whose premises had been burnt asked the Company to ‘break’ the front of East India House to provide shops. The Company refused - this would be ‘very inconvenient and unfit’.

When news of the fire reached India, the Dutch in Cochin celebrated and burnt an effigy of King Charles II.  The Company wrote to Madras in December 1666 warning them that the Dutch might exaggerate the effects of the fire. A plan was sent showing exactly what had been destroyed and what remained.

There is a story that victims of the fire were shipped out to St Helena in 1667 by the East India Company to start a new life. A set of stamps was issued by St Helena in 1967 to commemorate the 300th anniversary of their arrival. 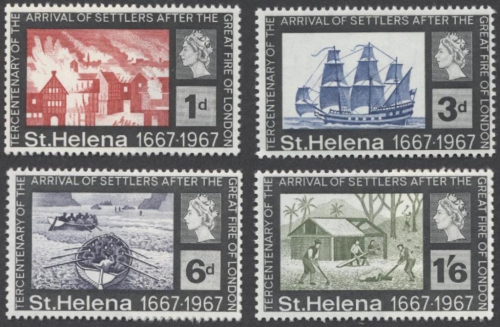 The story has been challenged and said to be a myth.  However the Company did write to St Helena on 28 December 1666 telling them that they were sending out people for the island on the ship Charles.  As well as Henry Gargen who was appointed to the Council, there were several other persons whose names and salaries were enclosed with the letter.  Unfortunately this list does not appear to have survived in the Company records held in London or St Helena , so the identities and place of origin of the settlers are unknown.

Posted by Margaret.Makepeace at 08:30:00 in Business , Journeys , Philatelic