When we think of children working in dangerous occupations in the 19th century, perhaps the first things that come to mind are chimney sweeps and mill workers.  I was surprised to learn that young children were employed to make priming for guns. This involved handling percussion powder, a highly inflammable preparation of potash, sulphur and charcoal. 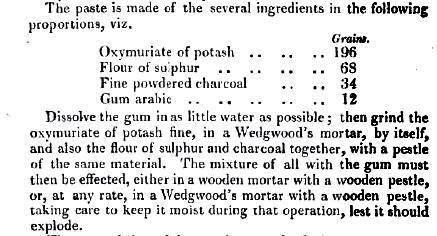 A terrible accident occurred in London on 12 November 1822.  Collinson Hall, a gunmaker in Upper Marylebone Street, arrived home about six o’clock in the evening  to find a crowd outside his front door.  He was told that there had been an explosion.

Alexander Bettie, aged 12, and his brother John, 10, had worked for the gunmaker for nearly two years.  Their job was to prepare black cakes for priming percussion guns and to fill copper caps with priming composition.  Hall had gone out for the day leaving the boys with instructions to make up about five or six ounces of the priming composition.

At teatime, Hall’s son Collinson left the workshop and went downstairs.  As he was returning about twenty minutes later, there was a fierce explosion in the workshop.  The stone fireplace was torn down; the doors were off their hinges; the ceiling of the room underneath fell; and windows on the staircase were blown out.  Collinson Hall junior found the brothers in the workshop, alive but burned and terribly injured.

Alexander and John both died shortly after being taken to nearby Middlesex Hospital. An inquest was held at the hospital. The Coroner’s jury were taken to the ‘dead room’ to see the boys’ maimed bodies laid together in one coffin, ‘a truly shocking sight’.

Both Hall and his son were questioned.  Collinson Hall senior said that the workshop was never locked, but the boys were not generally allowed to be in there unless the adult workmen were present.  The boys’ work was expected to be finished and taken from them before candlelight was needed.  He believed it was common practice in the gun making trade to employ children on such work – his own daughter aged 15 and another 16-year-old girl also worked for him - ‘He, however, felt confident that there must have been less caution used on this occasion in his absence than if he had himself been at home’.  The cause of the accident could only be guessed at – perhaps the boys took the cakes they had made that day out of the drawer, and perhaps a spark from a candle had ignited them. Percussion gun-lock in Transactions of the Society instituted in London for the encouragement of arts, manufactures and commerce vol. XXXVI (London, 1819)

A verdict of accidental death was returned.  The coroner explained that the jury could only punish the gunmaker by sending him for trial for murder or manslaughter. However that would imply that the powder had been deliberately placed in the children’s way and there was no ground to presume this.

Both the coroner and jury were disturbed by the case.  The coroner said he hoped that the accident would act as a warning: parents should not allow their children to be employed in such work, and employers should not take on children so young that they were incapable of judging the danger to which they were exposed.