Female Felons in the 18th Century

Calendars of prisoners are ephemeral broadsides that tell us something about individual convicts within the criminal justice system, and we’ve just acquired two fascinating examples from the 18th century.  Essentially these calendars are lists of prisoners who were awaiting regional trials, with a description of the charges against them.  Some were also printed after the trial, recording the sentences given.  The earliest calendars are manuscript records in a mix of Latin and English.  They were printed from the 1730s onwards in English to satisfy local public interest, prevent clandestine imprisonments and forewarn judges of the workload awaiting them at each trial. They continued to be printed until the 1970s.

The first calendar lists prisoners held at Wakefield House of Correction, which was essentially a workhouse.  At the time of printing, these prisoners were awaiting trial at the quarterly sessions (court for petty crimes) in January 1779.  Amongst the men charged with various thefts, assaults, desertions and, memorably, the sale of unstamped almanacs in the case of one Thomas Mosley, the few female convicts stand out. 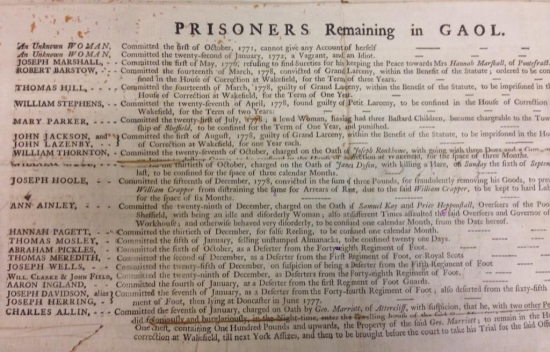 Hannah Pagett had a one month sentence for “false reeling”.  She produced yarn with a deficient number of threads.  Mary Parker was committed in July 1778.   She served a one year sentence as a “lewd woman, having had three bastard children”.  Ann Ainley was accused of being “an idle and disorderly woman”.  These roughly defined offences were common charges against women in the 18th century.  At least the names of these women have survived; there are two on the list who are, sadly, identified only as “an unknown woman”.  One “cannot give any account of herself” and the other is accused of being “a vagrant, and an idiot”.  It is possible that up to two thirds of prisoners in houses of correction like the one at Wakefield were female.  Beating hemp was the usual form of hard labour.  Whippings and beatings were also commonplace, particularly for those convicted of vagrancy, lewd conduct and night walking (prostitution).

The second calendar records prisoners in the Castle of York who were trialled at the assizes (court for more serious crimes) in March 1736.  One entry in particular caught my eye.  It says “Walker Margaret, Sutton Katharin, otherwise Mason Katharin, to be transported for seven years”.  The Transportation Act, passed in 1717, established a seven year convict bond service and penal transportation to North America as punishment for minor crimes.  Approximately 50,000 convicts (men, women and children) were transported to North America, an influx that was only plugged by the American Revolution beginning in 1765.  From then on, convicts were transported to Australia. 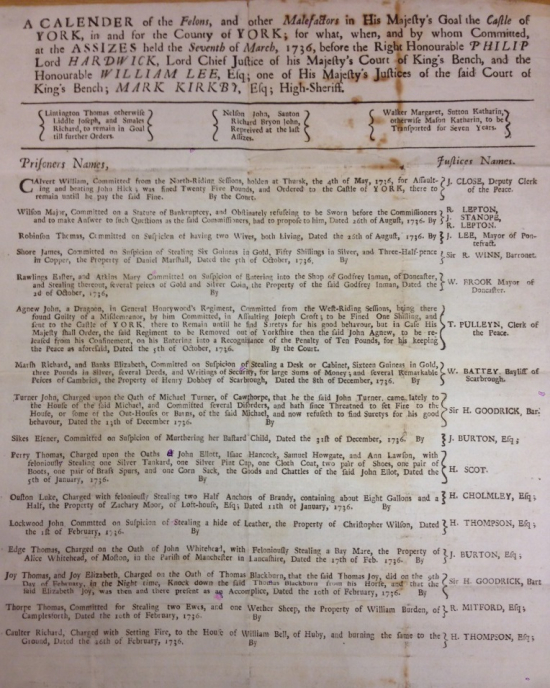 The Atlantic crossing was perilous; the convicts endured cramped conditions on merchant ships, often in chains.  As on slave ships disease was rife.  If they survived the crossing, and many didn’t, they were forced into hard labour on the tobacco fields.  After serving their sentence some returned to England but many established a new life for themselves in the vast anonymity of North America.  Did Margaret Walker and Katharin Sutton stay in, or even reach, America?  As with the fate of all these women, we’ll probably never know.

These new items will join the three other 18th century calendars of prisoners in the British Library.  We acquire ephemera like these to represent regional printing, the historical experience of the lower and criminal classes, and the diversity of English culture as a whole.

Posted by Margaret.Makepeace at 08:30:00 in Americas , Crime , Women's histories