Foreign Names and Flatulence: Dodging Censorship in the Book Trade

For centuries authors and printers struggled under strict laws and regulations that censored the printing trade. The Pope’s Index Librorum Prohibitorum (List of Prohibited Books) was first published in 1559 and only abolished in 1966. Printing continued to be subject to strict censorship via an elaborate system of licensing from the Church and State through the 16th and 17th centuries. The last act under this system was the Licensing of the Press Act (1662), under which the printing of “seditious treasonable and unlicensed books and pamphlets” was banned, punishable by fines and imprisonment. The Stationer’s Company, formed in 1403, enforced these laws. Parliament refused to renew the Licensing Act in 1694 but an umbrella of libel laws still existed that censored any material deemed defamatory, seditious, obscene and blasphemous. Despite these minefields, the print trade continued to grow. By the 18th century a steady stream of books, pamphlets, chapbooks, ballads, broadsides and newspapers were being produced to meet rising demand from an increasingly literate public.

So how did authors, printers and booksellers get away with producing illicit material?

Some material was imported from the continent. The Netherlands in particular benefitted from having an unregulated print trade, a stable economy and no censorious state religion. Some authors remained anonymous. Jonathan Swift, who had already faced prosecution for writing a number of politically controversial pamphlets, published his Gulliver’s Travels anonymously as it was a transparently anti-Whig satire. 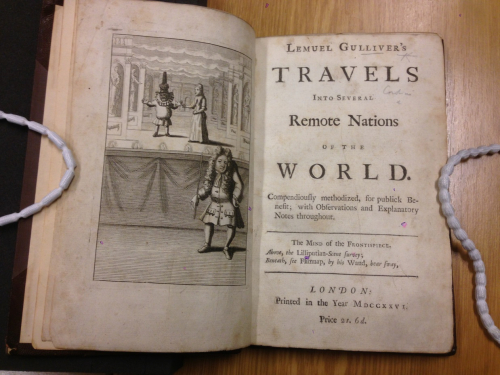 In some cases works were deemed too dangerous for even printers and booksellers to put their name to. Some remained anonymous, like in the Gulliver’s Travels imprint seen above. Others made up the imprint altogether, fabricating the printer’s name and, in extreme cases, the place in which they were based to mask their identities. The most routinely used fictitious imprint in this period was “A. Moore, near St. Paul’s [Cathedral]”. This imprint was often used simultaneously by more than one bookseller and even became a sort of in joke.  As Bookweight, the bookseller in Henry Fielding’s anonymous play The Author’s Farce, says knowingly, “sometimes we give a foreign name to our own labours… so we have Messieurs Moore near St. Paul’s, and Smith near the Royal Exchange”. It was used to print all manner of works, from political pamphlets to erotica (note the “amour” pun on the imprint) and bawdy scatological works like this one: 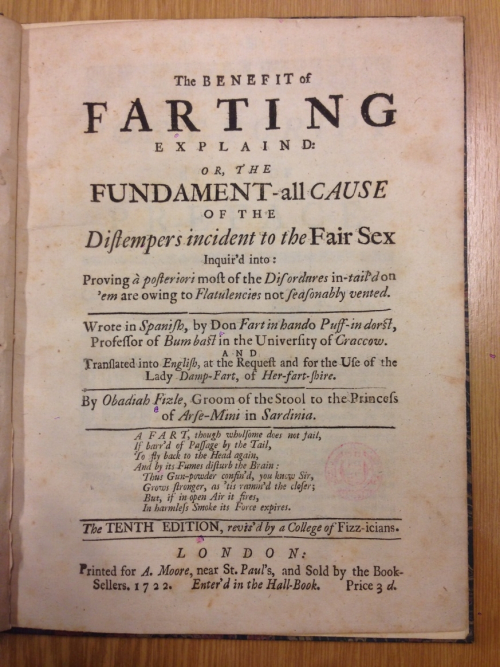 There are almost three hundred works listed on ESTC with this “A. Moore” imprint and, as it was then so it is now, it’s difficult to decipher who actually was responsible for printing these works. Current research focuses on matching woodcut ornaments found in these items to other known works by particular printers. However, this is laborious and many of the ornaments used at the time are almost identical. Still, maybe this isn’t such a bad thing; fictitious imprints give us a fascinating insight into the strict regulations that governed the 18th century book trade and solving all their mysteries might somewhat spoil the fun!