Letters from Indian Soldiers on the Western Front, September 1916

In September 1916, the Battle of the Somme was still raging violently. By that point in the First World War, the Indian infantry regiments had been transferred from France to fight in the Mesopotamian campaign, but the cavalry regiments remained on the Western Front.  The Censor of the Indian Mails reported that the mail for the past week, ending 23 September, had been very light owing to the Indian Cavalry being very much on the move.  One division was still encamped in a “somewhat unhealthy spot” just behind the firing line.  He admitted that the moves had caused unsettled feelings among the Indian troops. 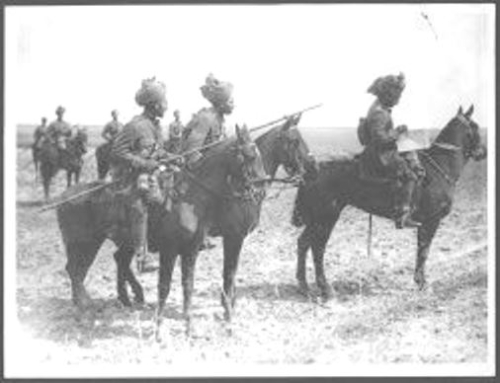 This can be seen in an extract from a letter from Jemadar Indar Singh to a family member in Ludhiana, India, originally written in Urdu, and dated 15 September 1916:

“I am off for a Cavalry attack on the enemy on the 15th September.  It is quite impossible that I should return alive because a Cavalry charge is a very terrible affair and therefore I want to clear up several things which are weighing on my heart at present.  Firstly, the sharp things you have written to me have not annoyed me.  Don’t be grieved at my death because I shall die arms in hand wearing the warrior’s clothes.  This is the most happy death that anyone can die.  I am very sorry that I have not been able to discharge my obligations towards my family because God has called me already.  Well, never mind you must forgive me.  I have abandoned to you all my worldly possessions which you must make use of without hesitation.  Don’t worry your grandparents after I am gone.  Give my love to my parents and tell them not to grieve as we must all die some day. Indeed this day of death is an occasion for rejoicing”.

In his report, the Censor was rather unimpressed by this letter, commenting that the writer “…is certainly a pessimist of the deepest dye and obviously mistook his vocation when he entered the Indian Cavalry”.

The anxious mood among the Indian Cavalry was also reflected in an extract from a letter by Bawat Singh, a Risaldar in the Poona Horse, writing on 20 September 1916:

“The fighting has been very violently lately and it is hoped that it will bring matters to an end.  I constantly pray God that I may speedily be removed from all these calamities and taken home.  Without God nothing can be achieved and we do not know when it will please him to finish the war.  At the present time the whole world is like a field of carrots and turnips which is being rooted up on all sides.  The day that God wishes it to be so, the war will cease, and the troubles and trials of the people of the world will be removed”.

The reports of the Censor of Indian Mails in France, including extracts from soldiers’ letters, are held in the India Office Records and can be found online.

Posted by Margaret.Makepeace at 08:30:00 in Journeys , South Asia , World War One