Sir Trenchard Craven William Fowle spent twenty-four years working as a British colonial administrator in the Persian Gulf before retiring in the summer of 1939. During that time he amassed a collection of thirteen Persian carpets. 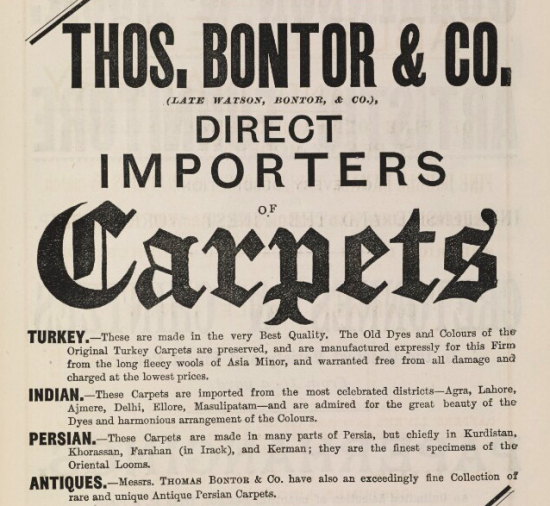 Prior to returning to England, Fowle put the carpets up for sale at the Political Agency in Bahrain. A list in an Agency file offers details of Fowle’s carpets. Five of the cheapest were described as Baluchi (i.e. made in Baluchistan), their price likely reflecting their small size. Four further carpets originated from Turkmenistan, while the two most expensive items were manufactured in the city of Kashan, renowned for its superior carpets of intricate design. 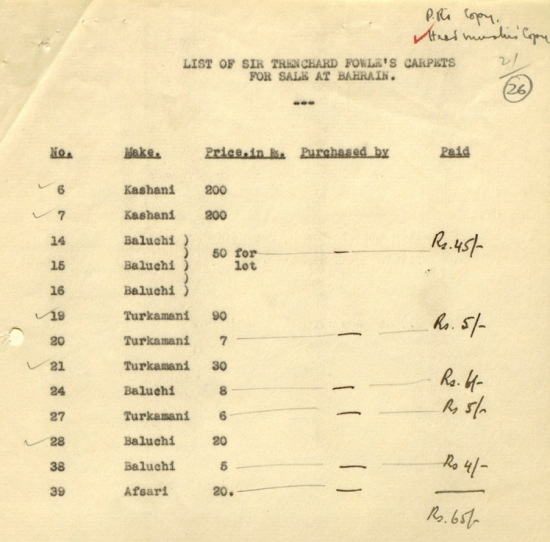 Europe’s affluent middle-classes became avid collectors of Persian carpets in the nineteenth century. Letters from the East India Company Resident in the Persian port of Bushire indicate that carpets were being sourced for European markets as early as 1813. In the meantime, a succession of European travellers to Persia, including the novelist James Morier and colonial administrators Henry Pottinger and John Johnson, penned narratives in which richly decorated carpets were closely associated with the opulence of the Persian court. 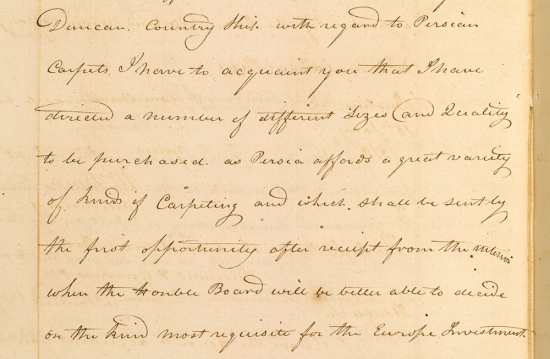 Extract of a letter from William Bruce, Acting Resident at Bushire to Francis Warden, Chief Secretary to the Government, Bombay, 17 January 1813.

The European (and American) market for carpets had grown to such an extent that by the 1880s, demand outstripped supply. ‘Very old carpets are now extremely rare,’ reported Robert Murdoch Smith in 1883, while sourcing Persian carpets for the South Kensington (now V&A) Museum. In response to a diminishing supply of carpets, commercial companies, including manufacturers from England, set up carpet-making factories in Persia, with the intention of catering specifically to their domestic markets.

In 1883 the Manchester firm Zielger & Company established premises at Sultanabad (now Arak) consisting of houses for their employees, offices, stores and dyeing rooms. This was no factory though; carpets continued to be hand-woven by women and children in the home, although now according to orders and designs stipulated by the Company. Between 1894 and 1914 the number of looms in Sultanabad increased thirty-fold, from 40 to 1,200 (equating to one loom for every 5.8 persons in the town). 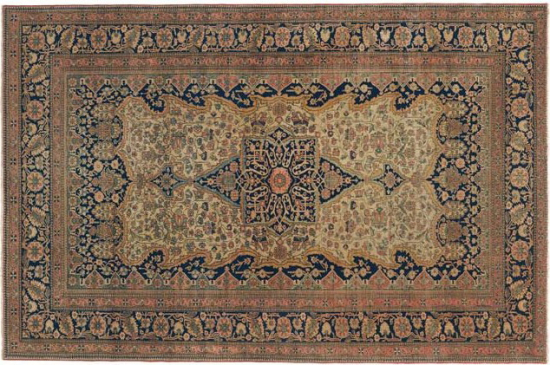 Although one British colonial administrator reported that the firm was ‘much liked by the villagers’, evidence of the exploitation of weavers elsewhere was reported. The impressions of other visitors to Persia suggest that some carpet production had shifted to grim karkhanas (or manufactories), described as ‘low, dark, miserable rooms’, often with a ‘sour and sickening atmosphere’, in which ‘weakly children of ten or twelve years’ laboured on carpets, under pressure to complete ‘a certain allotted portion per diem’. In 1913 the British Resident at Bushire noted there was ‘no doubt that the industry as carried on is responsible for a great deal of human misery, in deforming and arresting the development of children, especially the girls’.

Of Fowle’s carpets, the expensive Kashanis remained unsold. They were returned to Fowle’s widow after the War (Fowle himself having died suddenly in 1940), but not before being lost by staff of the Southern Railway Company, and spending two months in the lost property office at Waterloo Station.