On 13 June 1938 Shaikh Abdul Husain Al-Hilli, originally from Hilla in Iraq, arrived in Bahrain to act as the Head Shia Qadi (judge) at the Shia Court in Bahrain.  The appointment begs the question: given that Shias were a majority in Bahrain at the time, why was a Qadi brought all the way from Iraq and not appointed locally? 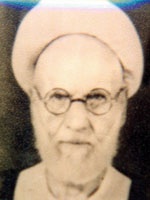 The India Office Records provide the answer to this question, in correspondence exchanged between Charles Dalrymple Belgrave, the Adviser to the Bahrain Government, Shaikh Hamad bin ‘Isa al-Khalifa, the Ruler of Bahrain, and the Political Agent in Bahrain. Between 1935 and 1937 enquiries were raised regarding the recruitment of a third Shia Qadi in Bahrain’s Shia Court. However, the possibility of this Qadi being a Bahraini subject was dismissed due to a number of cases involving the misappropriation of money by local Qadis. The Bahrain Government raised concerns about the local Qadis, who had been quarrelling amongst each other and allowing their personal animosities to influence their legal decisions.

IOR/R/15/2/1941, f 27. The copyright status is unknown. Please contact copyright@bl.uk with any information you have regarding this item.

Applications for the job were subsequently opened to foreigners. Shaikh Hamad was very keen for the candidate to be from one of the Shia holy cities of Najaf or Karbala’ in Iraq. He asked Mr. Belgrave to pass his request to the Political Agent in Bahrain to enquire from the Government of Iraq whether they could recommend a candidate. The job description drawn up by Shaikh Hamad stated that the candidate must have been educated in Sharia law either from a Waqf Department (responsible for the donation of land for charitable purposes) or from one of the schools in the Shia holy cities. The new Qadi was to be paid a larger stipend than the 100 Rupees paid per month to the local Qadis. This was to cover his travel expenses. IOR/R/15/2/1941, f 10. The copyright status is unknown. Please contact copyright@bl.uk with any information you have regarding this item.

Amongst the four candidates for the job, Shaikh Abdul Husain Al-Hilli (1883- 1956), a Najaf graduate, proved to be an authority in the field. Soon afterwards, Al-Hilli was appointed to act as Qadi and teacher of religious law in Bahrain. Upon moving to Bahrain, Al-Hilli opened a religious school in Manama near the Al-Khawaja Mosque. The school was mainly established to teach the principles of Islamic jurisprudence (fiqh). Many of Bahrain’s religious scholars, including Shaikh Ahmad Al-‘Usfoor and Al-Sayid Muhammad Saleh al-Adnani, benefited from Shaikh Al-Hilli’s school. A man of letters, Al-Hilli became known for his literary contributions in various Bahraini based magazines, literary clubs, and cultural institutions. He died in 1956 and was buried in Bahrain, the country which became a second home to him for nearly two decades. Interestingly, his place of burial is disputed. Some religiously affiliated online sources claim that Al-Hilli was buried in the holy city of Najaf, which reflects his significance and acclaim. 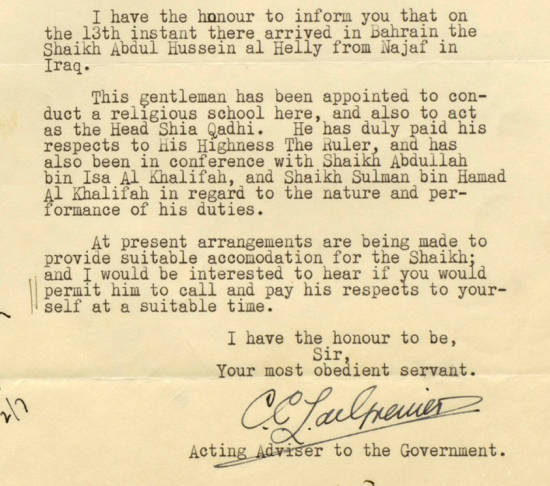 IOR/R/15/2/1941, f 51. The copyright status is unknown. Please contact copyright@bl.uk with any information you have regarding this item.