One hundred and one years ago today Edith Cavell was executed.  Last year, on the centenary of her death, her story was re-told in the press, the Royal Mint issued a commemorative £5 coin, and hundreds attended services to remember her.   In the years after 1915 she was not forgotten and people wrote poems and built memorials to her.  So it seems fitting not to let the 101st anniversary of her death pass by unnoticed, and to tell the story of the people who did not forget her. 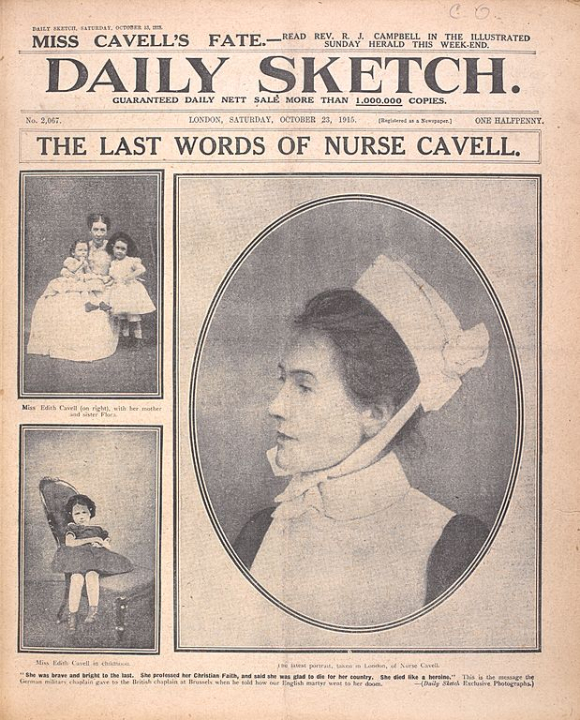 Edith Cavell was executed on 12 October for treason, having smuggled French and British troops out of German-occupied Belgium.  Immediately after her death the world was in shock and masses of ephemeral items were produced.  Several examples are held in the British Library in the volume at shelfmark Tab.11748.aa.2. which I have been working on.  (Fuller records for individual items within this volume will appear in Explore the British Library in due course.)

Many people used her death for propaganda purposes, as a rallying point to entice more men to join in the fight against the Central Powers.  E. H. Rowe, of South Shields, helped feed this propaganda, writing a poem that described German soldiers as ‘her relentless foe thirsting for her life’ and ending with the ominous line ‘God’s will be done. He will repay’.  Another particularly dramatic poem by John Streaks begins ‘She died a martyr in her country’s cause; we mourn to know how foully she was slain’. 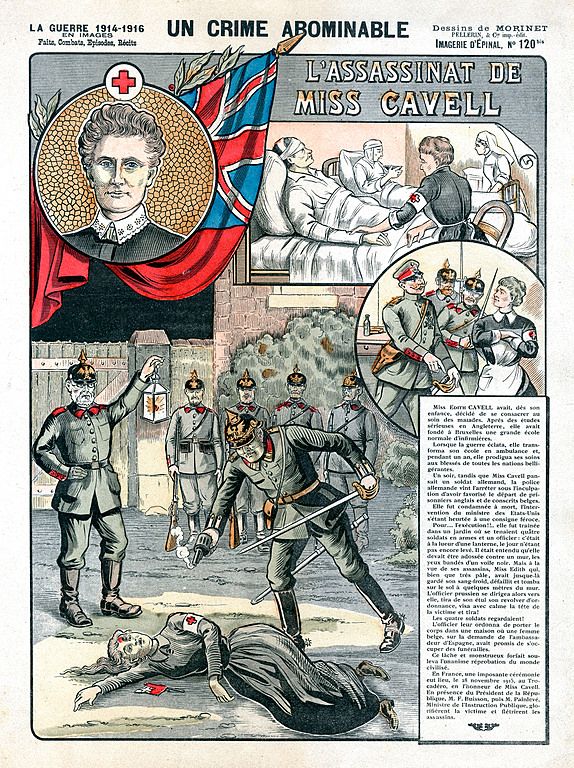 Some poems were printed and sold for charity.  The British Library holds a design for a memorial cross, adorned with a picture of her dressed in her nurse’s uniform and inscribed with the message ‘Nestling here the spirit of love ever watcheth and slumbering sleepeth not’.  The artist produced a small copy of this design with an explanation on the back, describing how he had chosen roses, maple leaves, thistles, shamrocks and oak leaves.  He wrote that by adding lamps to the composition a ‘sacramental feeling’ is produced, that makes one want to pause and remember.  He created a larger version of this image for sale, and hoped that a good proportion of the profits would go to ‘Homes of Rest for Nurses’.  The Daily Mirror (alongside the Daily Telegraph) raised money for an Edith Cavell Memorial Fund, which had poets composing sheets to be sold in order to raise money.  Her death was a rallying point for all Allied troops.  Even in Canada memorial sheets were sold to collect money for the Canadian Red Cross and Canadian Patriotic Funds.

Multiple poems were written about her legacy.  One printed pamphlet has a large drawing of her face inside a laurel wreath with the caption ‘A tribute written to the air of “Queen of the Earth” in memory of a woman, whose name will live in history, and whose fame will be as imperishable as that of either Florence Nightingale or Grace Darling’.  Nowadays the propaganda purpose of such items is well known, and historians are beginning to understand Edith Cavell as an individual, complicating the view of Nurse Cavell-as-martyr that is suggested by this ephemera.

Further reading:
The items cited are all from the guard volume at shelfmark Tab.11748.aa.2. except for the larger design for a memorial cross at shelfmark: 1820.h.8.(104.)
Edith Louisa Cavell
World War One atrocity propaganda
Diana Souhami, Edith Cavell (London, 2010)

Posted by Margaret.Makepeace at 08:30:00 in Propaganda , Women's histories , World War One