Henry Evans Evanion (1832-1905), a conjuror from Kennington, South London, enjoyed a successful stage career in which he presented a full programme of magical effects, illusions, juggling and ventriloquism. 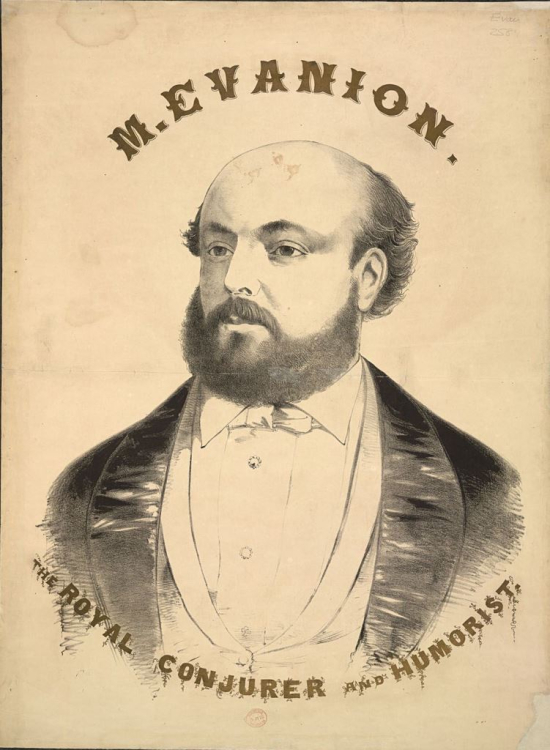 An added touch of humour ensured that during a typical performance 'trick followed trick with wonderful rapidity, and a profusion that speaks highly for Mr. Evanion's resources', as the Morning Advertiser reported on 23 December 1873. 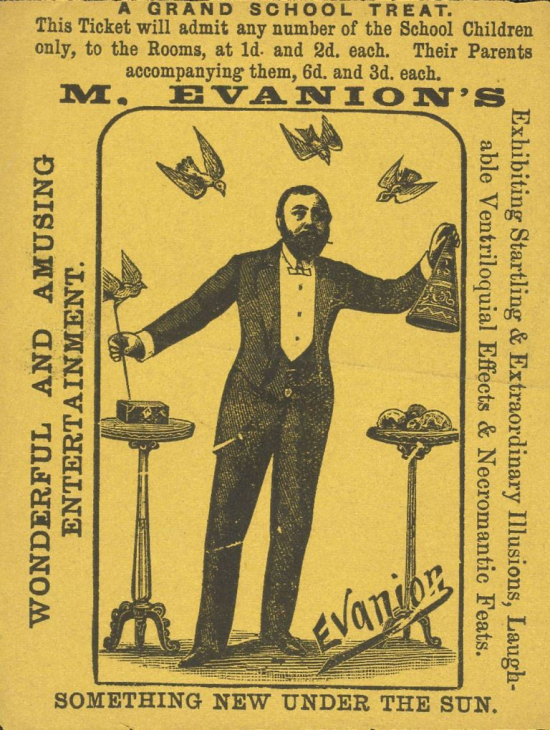 Evanion probably learnt to be resourceful at a young age. As a boy he liked to entertain the youngsters of the neighbourhood while his father was out at work and he assembled a small stage in the loft of the family house for the purpose. The loft was also where Evanion’s father housed his pigeons. On one occasion Evanion created the startling illusion of fire and caused such a bright red glow to be seen from the window that a neighbour, thinking the house was on fire, alerted Mr. Evans. Evanion’s father rushed home in a terrific rage to find the pigeons he loved like life “sneezing fit to break their necks”. He savagely kicked the boys downstairs.

However his father’s lack of enthusiasm did not deter Evanion in any way and just two years later in 1849 he gave his first professional magic show. Evanion continued to present his ‘evenings of illusions’ to many audiences up and down the country and, as notices and programmes in the Evanion Collection show, he was still active in the 1890s. 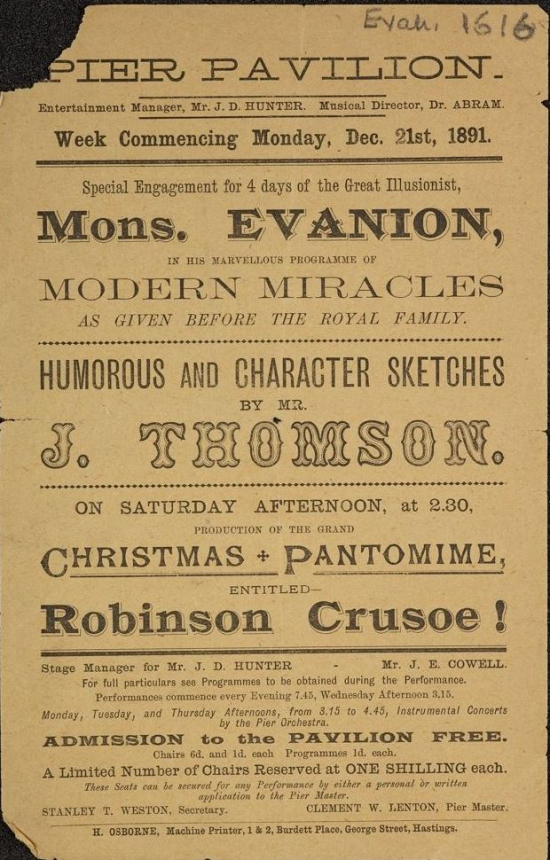 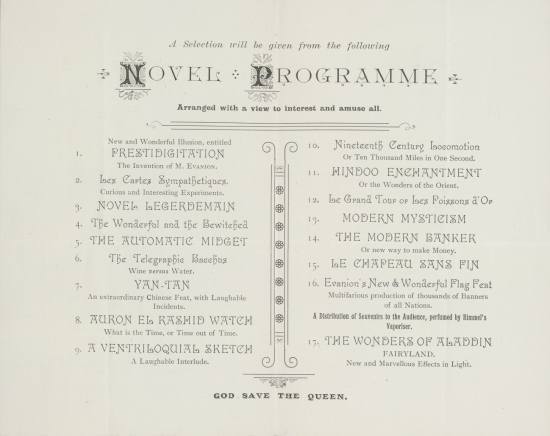 One performance defined Evanion’s career. This took place 150 years ago on Saturday 27 October 1866 when he entertained a distinguished audience at Sandringham that included their Royal Highnesses the Prince and Princess of Wales (the future King Edward VII and Princess Alexandra of Denmark), and members of the Danish Royal family. This gave Evanion the status of ‘Royal Conjuror’ – a title that he naturally continued to exploit in publicity material for the rest of his career. This poster shows a performance of the illusion ‘Globes of fire, fish and birds’ before an eminent audience. Evanion is pictured at the spectacular magic moment when the final large bowl – of fire – has just been miraculously produced from beneath his coat.

Throughout his life Evanion had also been fascinated by the variety of printed material in general circulation. He collected posters, playbills, programmes and associated ephemera relating to magic and a variety of other entertainments. In 1895 Evanion offered part of this now vast collection to the British Museum and some 6,000 items were subsequently purchased. This was a remarkable acquisition at a time when such contemporary, ephemeral pieces were not considered significant. Today the vibrant Evanion Collection at the British Library brings us particularly close to everyday life in Victorian Britain.

Helen Peden
Curator, Printed Heritage Collections 1601-1900 and British Library curator of the exhibition Victorian Entertainments: There Will Be Fun

Visit There Will Be Fun – a free British Library exhibition on Victorian popular entertainments, open until March 2017, and see many other rare and wonderful treasures from the Evanion Collection.