Pageantry and Parade in Persia

In February 1809, the Napoleonic Wars were raging in Europe. The Ottoman Empire and Britain had just concluded the Treaty of the Dardanelles, while in Spain a British army was forced from the shores of Northern Spain at the Battle of Coruna. Meanwhile, the French, British and Russians were also fighting for influence and control in the Persian Empire. The Russians and Persians fought a bitter war for control of the Caucasus, the French sought to threaten India with a Franco-Persian alliance, and Britain looked to prevent both while also drawing away attention and resources from Europe.

In order to do this, a letter was prepared by the British from George III to the Shah of Persia, Fath Ali Shah Qajar. This letter was delivered by the representative of the East India Company and British government  in Persia, Sir Harford Jones. Being an old hand in Persia, Jones appreciated that it wasn’t just the letter that was important, but also how it was presented. A record of the procession organised by Harford Jones is written in the East India Company’s records. It gives an impression of the importance that such pageantry held in the workings of diplomacy in Persia and elsewhere at this time. 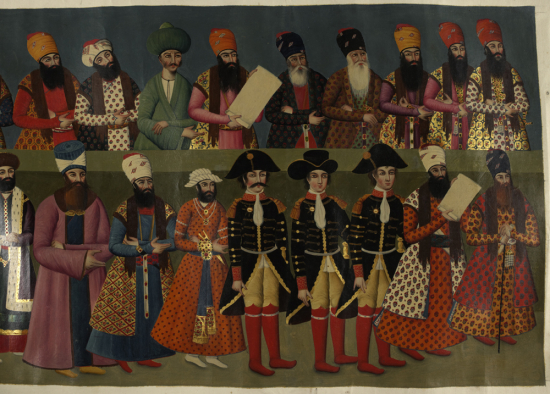 Add.Or.1241 The court of Fath Ali Shah with foreign ambassadors - from a reduced copy of the Nigaristan Palace mural. Images Online

It’s not always what you say, but the way you say it. The embassy of Harford Jones was not just impressive in terms of its personnel either, as it carried with it an array of expensive gifts from India and London. The procession was calculated to look impressive, being a display of wealth and military strength to assuage any doubts as to Britain’s ability to defend herself or her Empire in India. The situation in Persia was complicated by constant shifts in the interests of each power in Europe, with both the French and British wishing to bring Russia onto their side while knowing that any agreement with Russia would abrogate the chances of a treaty with Persia. Displays of power and prowess were therefore seen as a necessary ingredient in diplomacy with Persia.

Posted by Margaret.Makepeace at 11:35 AM