After ousting the young Ahmad Shah from the imperial throne in 1925, Reza Shah Pahlavi determined to once again assert Iran as a world power on the global stage. Gone were the Qajars, who had reduced Iran to a mere plaything in the hands of the English and the Russians; their reign had been replaced by a new order, which sought to modernise Iran, embolden a national identity, and salvage the nation from the ideas and institutions that had so entrammelled it for centuries.

In 1932, Reza Shah invited the Nobel Prize-winning Bengali poet Rabindranath Tagore to Iran. Ties between Iran and India stretch back to time immemorial, a fact of which the Shah and the poet were well-aware. The Shah, on one hand, sought to promote and celebrate Iran’s Aryan (or, Indo-Iranian) identity, while Tagore saw Aryan kinsmen in the Iranians. ‘In me they saw a poet, and that too an Eastern poet, an Indo-Aryan poet like themselves’, he noted. Issues of ethnicity, however, constituted only a part of Tagore’s interest in Iran. The poet was familiar with Iranian history and literature, and was also curious about the Pahlavi dynasty.

On 11 April 1932, Tagore and his daughter-in-law Pratima Devi set out for Iran by air, and reached the port city of Bushehr on the 13th. Although Tagore would later visit the ruins of Persepolis and the Iranian capital, Shiraz (in which he arrived on the 16th) undoubtedly marked the raison d'être of his trip. 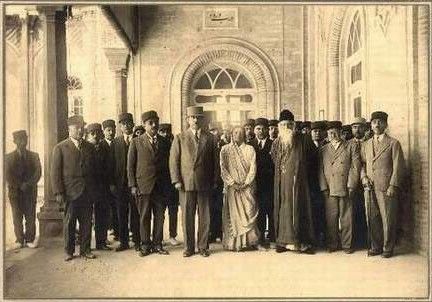 Tagore with members of the Iranian Parliament in Tehran Wikimedia Commons

In Shiraz, Tagore visited the tombs of the revered Persian poets Sa’di and Hafez. Unlike Voltaire, who had been nicknamed ‘Sa’di’, Tagore – like Goethe before him –felt more of a kinship with Hafez (here is a Mughal-era commentary on his Divan).  Could this have been because of his upbringing? Tagore’s father was a known lover of Hafez. ‘I spent half the night reciting hymns and the verses of Hafez’, he remarked of his childhood evenings. This love was later passed down to his son: ‘… I had my first introduction to Hafez through my father, who used to recite his verses for me’, Tagore recalled in Esfahan. ‘They seemed to me like a greeting from a faraway poet who was yet near to me.’

Indeed, the bond between the two poets extended far beyond verse. At Hafez’s tomb, Tagore sat and read the bard’s poems alone with eyes closed. ‘I had the distinct feeling that after a lapse of many centuries, across the span of many births and deaths … another wayfarer … had found his bond with Hafez’, he afterwards wrote. Echoing the florid imagery of Hafez’s poetry, Tagore penned a eulogy of Iran before leaving for Calcutta in early June:

Iran, all the roses in thy garden
and all their lover birds
have acclaimed the birthday
of the poet of a far-away shore
and mingled their voices in a pair of rejoicing.

… And in return I bind this wreath of my verse
on thy forehead, and I cry: Victory to Iran!

Joobin Bekhrad
Founder and Editor of REORIENT, a publication about contemporary Middle Eastern arts and culture