Women!  Dump the pumpkin this Hallowe’en!  Revive an old tradition!  Hurry away and bake a dumb-cake.

The dumb-cake was a method by which unmarried women tried to discover the identity of their future husbands. The ritual is linked to several dates in the calendar: Hallowe’en, Christmas Eve, the Eve of St Agnes (20 January), St Mark’s Eve (24 April), and Midsummer Eve. There were variations in practice in different parts of the UK but all agreed that that not a word must be spoken throughout.  The slightest whisper would break the spell.

According to the Preston Herald, a large sheet of white paper was spread on a table and three girls each placed on it a handful of flour and a pinch of salt. A dough was made and the girls took turns to roll it out. They then marked the dough with their initials and put it before the fire to bake. The girls sat in a half-circle as far away from the fire as possible. Between 11pm and 12am each girl had to turn the cake once. On the last stroke of midnight, the future husband of the girl to be married first would stride into the room and point at her initials.

A Scottish version of the cake recipe was far more inventive.  The Aberdeen Evening Express gave instructions for four girls to prepare thimblefuls of sand, flour, bran, salt, and brick-dust, with parings of their nails and some hair from the back of their head.  So not something you’ll ever see show-cased on the Great British Bake Off.

Dumb-Cake rules in Yorkshire decreed:
Two to make it,
Two to bake it,
Two to break it.
A third girl put a piece of the cake under the pillows of the two bakers.  When they dreamed, the girls would see the face of their future husband.

In Leicestershire, dumb-cakes were intended to be eaten.  The girls ate their share whilst walking backwards to bed.  If a girl was destined to be married, she would see her husband rushing in pursuit. 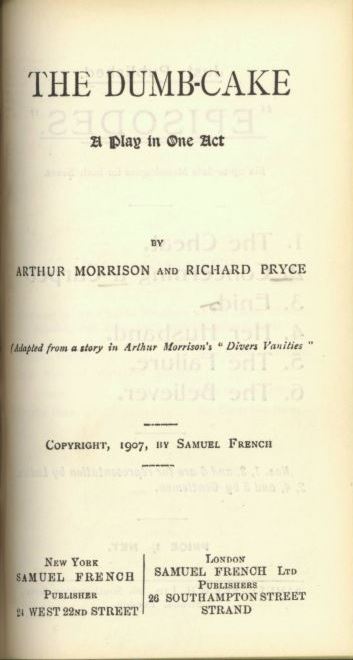 A one act play entitled The Dumb-Cake was first produced at the Hicks Theatre in London on 19 June 1907. It is set at Hallowe’en at Webster’s Almshouse in the Borough where Martha Hardy has been nursing her bed-ridden mother for some years.  A neighbour, Mrs Nye, has encouraged Martha to bake a dumb-cake. When Spotto Bird, a pickpocket seeking refuge from the police, ducks through Martha’s open door, she believes the cake has worked its spell...

Posted by Margaret.Makepeace at 08:30:00 in Domestic life , Women's histories