The British did everything in their power to thwart the journey of a young Danish explorer into the heart of Arabia in 1912 – but ended up helping him by mistake.

The Danes had a history of exploration in the Arabian Peninsula going back to Carsten Niebuhr in the 18th century. In 1911 the Royal Danish Geographical Society decided to revive that tradition by mounting a new expedition.  One of the members was a young Danish student, Barclay Raunkiær, whose father, the botanist Christen Raunkiær, gives his name to a system of plant categorisation still in use today.

The Society duly informed the British Government of their intentions. However, the British viewed the expedition as an unwelcome intrusion into their imperial sphere of influence, and decided that it should be prevented.  The British claimed that as they could not guarantee the safety of their own officers and travellers in the region, they could not offer any assistance or protection to the Danes either.

As a result, the Society abandoned the scheme, despite the fact that money had been raised and plans were well advanced. Nevertheless, Raunkiær decided to make the journey himself, and after passing through Ottoman territory, he arrived at Kuwait in January 1912. 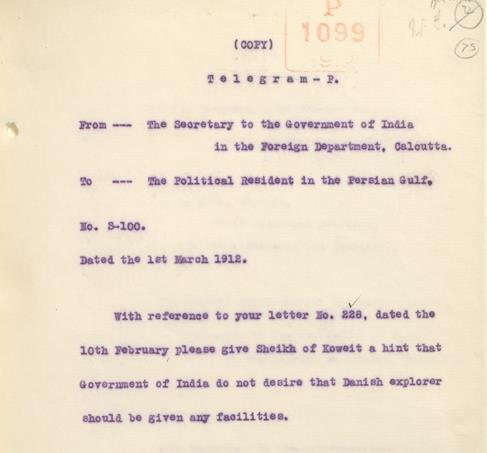 Telegram from the Government of India to the Political Resident dated 1 March 1912 asking the Resident to give ‘a hint’ to the Sheikh of Kuwait
IOR/L/PS/10/259, f 75.

The British Government of India responded by giving instructions to the Political Resident in the Persian Gulf  that ‘a hint’ should be given to the Sheikh of Kuwait that no assistance should be given to Raunkiær. Without the Sheikh’s support the expedition would be impossible. British officials also monitored the Dane’s movements in the region and passed on information.

It came then as a considerable surprise to the British some months later to learn that the expedition had been a complete success. Raunkiær had made his way from Kuwait to Riyadh and back to the coast at Bahrain, ‘in a somewhat dilapidated condition’, collecting important geographical, ethnographic and botanical information on the way. 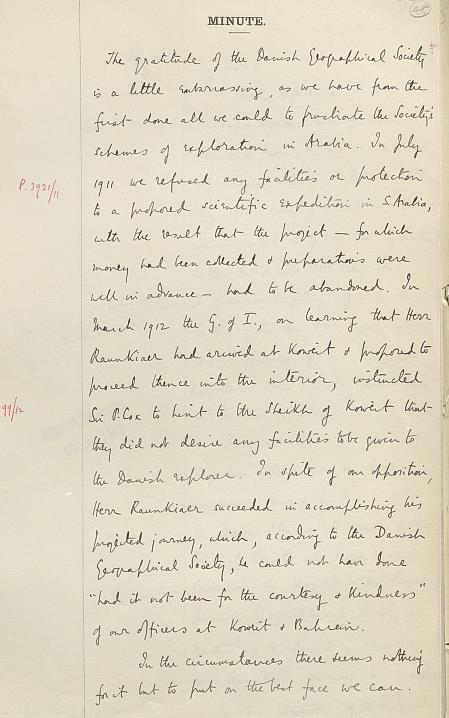 Worse, the Royal Danish Geographical Society sent a letter thanking the British Government, particularly mentioning the valuable assistance given to Raunkiær by two British Political Agents, Shakespear at Kuwait, and Lorimer at Bahrain. An India Office minute records that after all the obstacles the British had placed in the way of the Danes it was ‘a little embarrassing’ to be thanked in that way, and in the circumstances there seemed to be nothing for it but ‘to put on the best face we can’.

Part of Captain Shakespear’s report on Barclay Raunkiær, 9 March 1912. It was ‘regrettable’ that the Government of India had not made their objections known sooner - IOR/L/PS/10/259, f 42.

The British Government wanted to know what help, exactly, Lorimer and Shakespear had given the expedition. Lorimer was quickly exonerated, but Shakespear was forced to explain that he had given the Dane his ‘good offices’ and permitted the Sheikh of Kuwait to assist the expedition because instructions to the contrary had not arrived in time. He had also thought that Raunkiær’s limited mapping skills showed he was more of a botanist than a geographer, and he had satisfied himself that Raunkiær was not acting on behalf of either the Turks or the Germans.

Raunkiær himself, weakened by his exertions, died in Copenhagen in 1915. He was 25.

Posted by Margaret.Makepeace at 08:30:00 in Journeys , Middle East , Qatar , Science and environment