A music examiner’s tour of India

Amongst the India Office Private Papers at the British Library is the personal diary of Dr Charles MacPherson.  A fellow of the Royal Academy of Music, and organist at St Paul’s Cathedral from 1916 until his death in 1927, MacPherson published a number of musical works.  The Library holds the manuscript of his Solemn Thanksgiving Te Deum for orchestra and chorus composed for the service held at St Paul’s to celebrate the signing of the Treaty of Peace in July 1919. 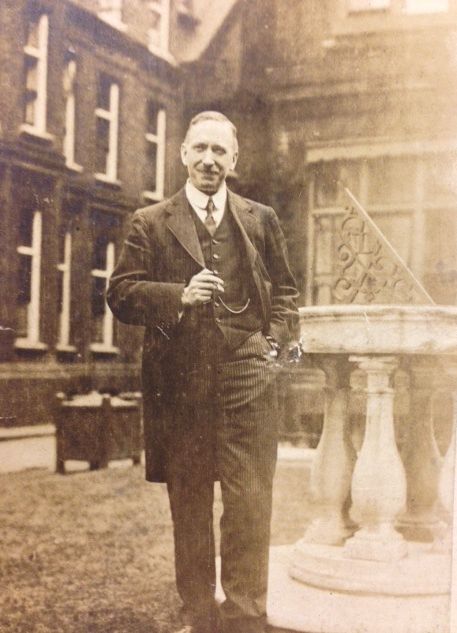 In the autumn of 1925 MacPherson undertook a tour of India and Ceylon as an examiner for the Associated Board of the Royal Academy and Royal College of Music.  His diary details the trials of travelling from town to town and his forthright opinions on just how foreign this nation and her people are to him, as well as moments of wonder at the beauty of the architecture or scenery.

Accompanied by his wife Sophie, MacPherson left Tilbury on 28 August 1925 bound for Bombay.  The couple weren’t taken with the idea of a long voyage and ‘both thought the joys of seafaring overrated’.

MacPherson was keen to document any musical moments he encountered.  He described a ship’s officer playing the harmonium ‘whose left hand was greedy for more notes, that were always forthcoming though seldom possessing any connection with the “time-hand”.’  The crew and passengers formed a chorus, with MacPherson himself having to sing an octave lower than usual owing to laryngitis.

Arriving at Bombay on 18 September, MacPherson was immediately taken with the difference in appearance of the native people: ‘No two people looked or dressed alike …quaint old men wore white shirts, but outside of their lower garments.  This custom would look odd in England with dress clothes!’ The musician then undertook a programme of examinations that kept him so busy that he even had to turn down an invitation of lunch from the Viceroy.  His schedule took him to St Paul's School in Darjeeling, the highest school in the world at 7,600ft above sea level.  In Bombay he visited ‘a girl’s school, good piano, birds flying about in the room’.  He found the town of Hardwar unsettling because it was 'infested with monkies’, wondering that 'these dreadful beasties are counted as sacred'.

In Delhi MacPherson commented; 'The old buildings are things to be wondered at, and seem to belong to picture books rather than reality.  Ancient India must have been truly a wondrous country'.  In Mysore he notated wedding music: ‘a marriage procession headed by a band consisting of a hand-drum, a tambourine, a native trumpet, a kind of cornet and a bagpipe.  The really fine thing was the rhythm maintained between the hand-drum and the tambourine - something like...’ 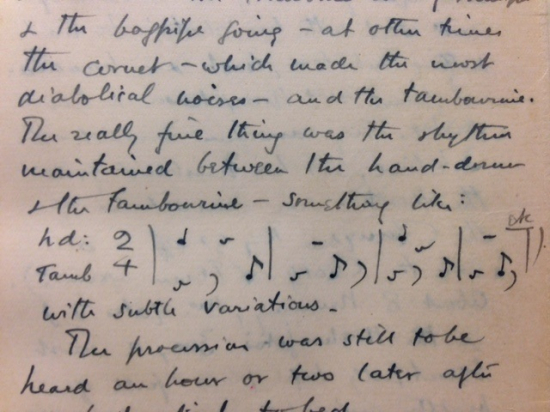 The MacPhersons continued onto Ceylon which they found, almost ‘Europe-like’ after India with the port ‘rather like Clacton-on- Sea, or a trifle less distinguished’.  Despite the tiring travels, the trip was deemed a success as he closed with ‘here ends the diary of a wonderful experience’.

Posted by Margaret.Makepeace at 08:30:00 in Arts and crafts , Journeys , South Asia , Work