In November 1942, the Secretary of State for India, Leo Amery received a report from Sir Azizul Huque, High Commissioner for India in the United Kingdom, on the low pay and poor living conditions of Indian seamen serving in the British Merchant Navy. The very interesting report and subsequent correspondence on the issues are contained within a file in the India Office Records. 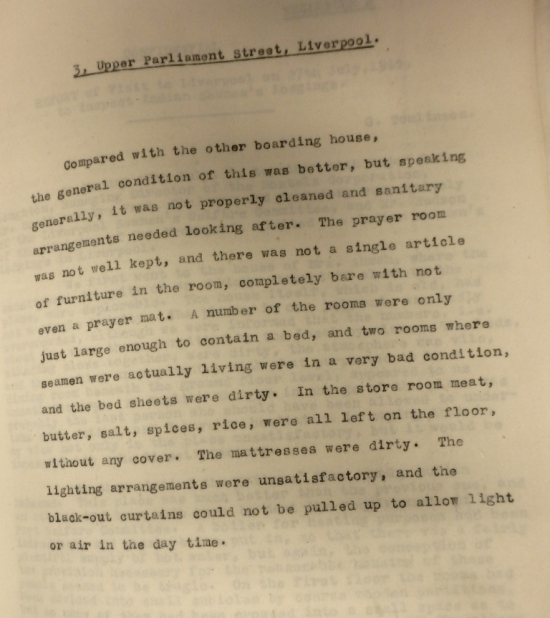 Sir Azizul Huque’s report exposed the poor living conditions in Liverpool and Glasgow in which Indian seamen were obliged to live. He visited Glasgow in July 1942, and found a hostel recently constructed by the Missions to Seamen which he described as excellent, and a private boarding house named Alley’s Boarding House was regarded as acceptable. However, one common lodging house named Norfolk House was described as extremely unsatisfactory. This was due to Muslim seamen having to cook their food close to where ham and bacon were cooked by other lodgers. This was a cause of considerable grievance, as was the poor standard of cleanliness and sanitary arrangements.  Sir Azizul brought this to the attention of the Ministry of War Transport who arranged for the Indian seamen to be removed to approved boarding houses.

Sir Azizul also enclosed a report on a visit to Liverpool by Mr Tomlinson, Chairman of the Ministry of Labour Seamen’s Welfare Board, to inspect the seamen’s lodgings there. The conditions at the house at Trinity Place, Springfield were described as abominable,” a veritable rabbit warren for human beings”. Another house in the city was stated to be deplorable, and in such a state that it would be impossible to make it satisfactory, badly overcrowded and dirty, with a vile atmosphere. It was recommended that the system of farming out boarders by the steamship companies should stop, and a seaman’s hostel for Indian seamen should be established in keeping with the Ministry’s standards.

There were over 30,000 Indian seamen in the British Merchant Navy at that time, forming almost one-fifth of its total strength, and yet they received lower wages than either Chinese or British seamen. In 1942, an Indian seaman received wages of £4 1s per month compared to £16 15s for Chinese seamen and £22 12s 6d for European seamen. The official explanation given for this in an internal India Office note was that they were inefficient compared to Chinese and British seamen, and that the standard of living in the villages where Indian seamen came from was very low, and so despite being poorly paid they were still better off than their fellow villagers. 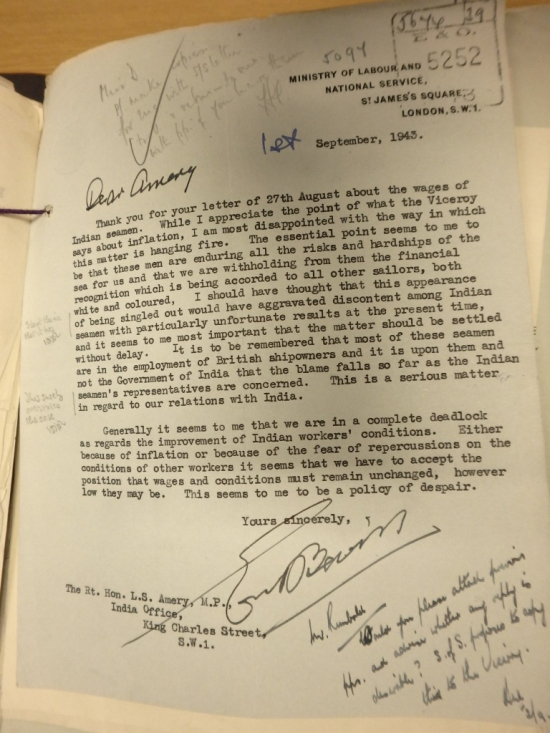 The rest of the file contains some fascinating correspondence detailing attempts by Sir Azizul Huque, Ernest Bevin, the then Minister for Labour and National Service, and others to improve the wages received by India seamen in order to bring them more into line with other seamen in the Merchant Navy. As Bevin pointed out to Amery in a letter of 1st September 1945, “these men are enduring all the risks and hardships of the sea for us and … we are withholding from them the financial recognition which is being accorded to all other sailors, both white and coloured”.