The British Legion’s Fundraising in the Age of Empire

The British Legion was founded on 15 May 1921 with a mission, in its own words, ‘to care for those who had suffered as a result of service in the Armed Forces during the [First World] war, whether through their own service or through that of a husband, father or son.’  The first Poppy Day was held on this day, ninety-five years ago, on 11 November 1921.

Detail of the British Legion’s letterhead in use in the 1930s.

Then, as now, poppies were made by war veterans, for sale to the general public in both Britain and across the British Empire (and later, the Commonwealth).  In its formative years, the Legion’s work was solely preoccupied with those that had served in the First World War.  Money raised by the sale of poppies was spent on a variety of programmes, including towards the relief of distress, the provision of employment and housing for ex-servicemen, tuberculosis treatment, pensions, and financial assistance toward the migration of ex-servicemen to Britain’s ‘dominions’. 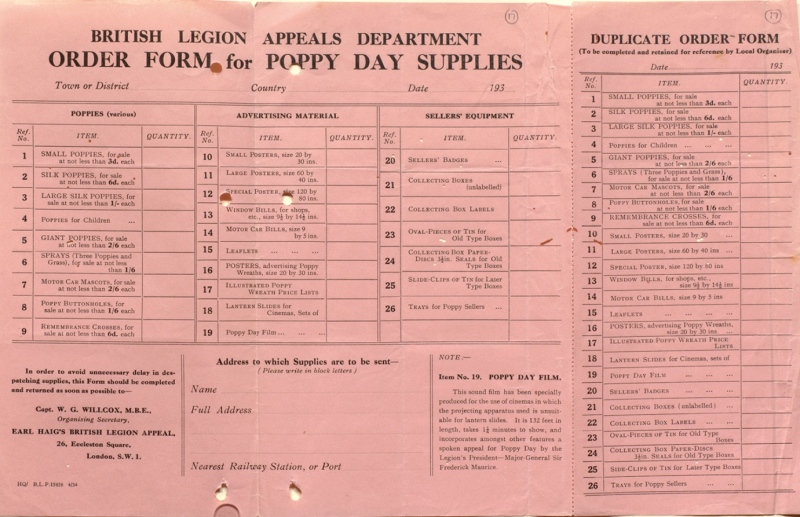 A number of files in the India Office Records, held at the British Library and presently being digitised as part of the British Library Qatar Foundation Partnership, give a flavour of the British Legion’s global reach and fundraising efforts between the First and Second World Wars. The records show how the organisation tapped into Britain’s network of colonial administrators to extend their activities to the furthest flung corners of Britain’s empire, including to the shores of the Persian Gulf. The Legion designated administrators such as the Political Agent at Bahrain as Organisers, who were responsible for coordinating the mail order and sale of poppy merchandising in areas under their jurisdiction.

As an Organiser, the Bahrain Political Agent received regular correspondence from the British Legion throughout the 1930s, enclosing, amongst other things: gramophone records containing a personal appeal by the Legion’s then patron, the Prince of Wales; ‘talkie’ films featuring footage of the Cenotaph and war cemeteries in France; brochures; magazines; and mail order forms for leaflets, poppies, wreaths, badges, posters, and poppy ‘mascots’ for cars and motorcycles. The British Legion also sent forms to administrators requesting details of local towns and villages, and ‘any districts where a Poppy Day is not organised’, so that further British communities might be reached. 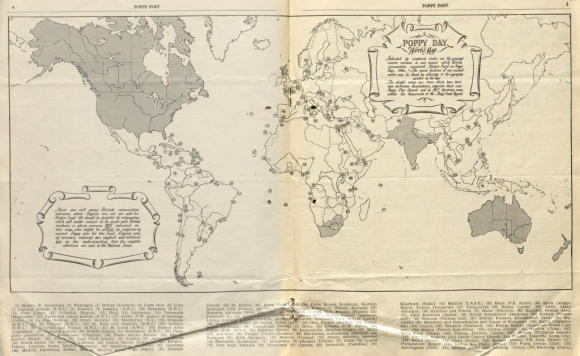 Correspondence between the British Legion and Britain’s Political Agent at Bahrain reveals that, prior to 1938, poppies were not sold on the islands, the Political Agent explaining that ‘their sale would not be appropriate in the circumstances in Bahrain.’ Collections were, however, raised amongst the islands’ expatriate community, which had grown in size significantly by the late 1930s, thanks to the large numbers of American and Indian employees working for the Bahrain Petroleum Company.

The start of the Second World War in 1939 marked the point at which the British Legion began to raise funds for those affected by present, as well as historic conflicts. As its letterheads in the first years of the new war made clear, ‘war increases our responsibilities.’ The ‘time is rapidly approaching’ wrote the Legion’s secretary in March 1940, ‘when the claims from this new category of Ex-Service man will assume serious proportions'.