The case of Margaret Duchell, who “died a confessed witch”

The early modern period in Scotland is well known for the severe persecution of alleged witches, who were detained, tortured and brought before the court to be tried and sentenced. One volume in British Library collections, Egerton MS 2879, provides an insight into the sort of accusations that could lead to a person’s detainment for the crime of witchcraft. It also documents the process of gathering evidence and presenting a case. Between 1658 and 1659 five women were accused of witchcraft at Alloa, a small town in Clackmannanshire. They were interrogated and cases were prepared against the women. Inside this volume are documents on the case of Margaret Duchell, the first to confess and accuse other women as accomplices. 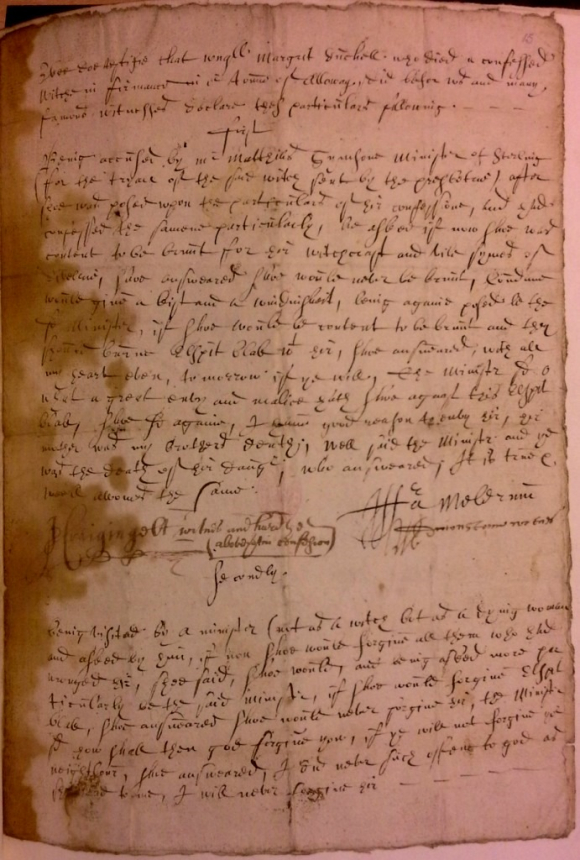 This, alongside a document at the National Records of Scotland, records the accusations against Margaret, demonstrating some of the widespread witchcraft beliefs at the time. She was detained for over a month before she “died a confessed witch” (f.15) in her confinement. During this time she was interrogated and likely tortured into denouncing other women and confessing to her own crimes. 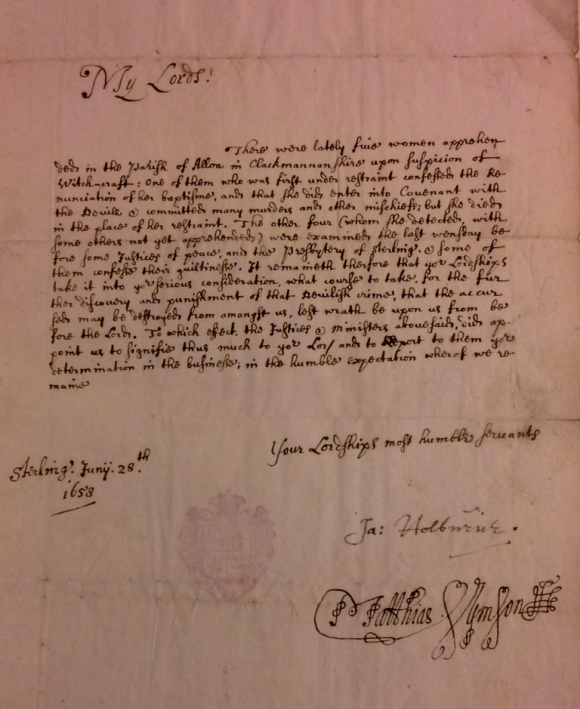 Details of the witchcraft case against the five women, Egerton MS 2879, f.1

In order to receive the power to perform malevolent acts upon other people, Margaret claimed to have entered a pact with the Devil. Sources tell us that the Devil tempted Margaret with money, and the two sealed the deal with both a meal, and through sexual intercourse. Once they entered the pact, Margaret was free to commit “many murders and other mischiefs” (f.1), along with other women who had supposedly also entered the Devil’s service.

Disputes with members of the Alloa community seem to have given Margaret rise for causing them harm. She admitted to striking Janet Houston on the back, which resulted in her death, over a quarrel about money. We also hear about a disagreement with a twelve year old girl, who called Margaret a witch in public, whereby Margaret apparently tugged upon her arm, resulting in her bleeding to death. These accusations were later denied by Margaret at a kirk session in May and even the presiding minister doubted whether they were physically possible.

Margaret was also accused of possessing shape-shifting abilities, to metamorphose into the form of a dog. The Devil himself was sometimes depicted in the form of a dog. During an attack on one William Morrison with a group of other witches, Margaret transformed into a dog to follow him. The later confession of Barbara Erskine reveals that Margaret and a group of women also destroyed a boat, during which they “wer in the lyknes of corbies” (f.4). 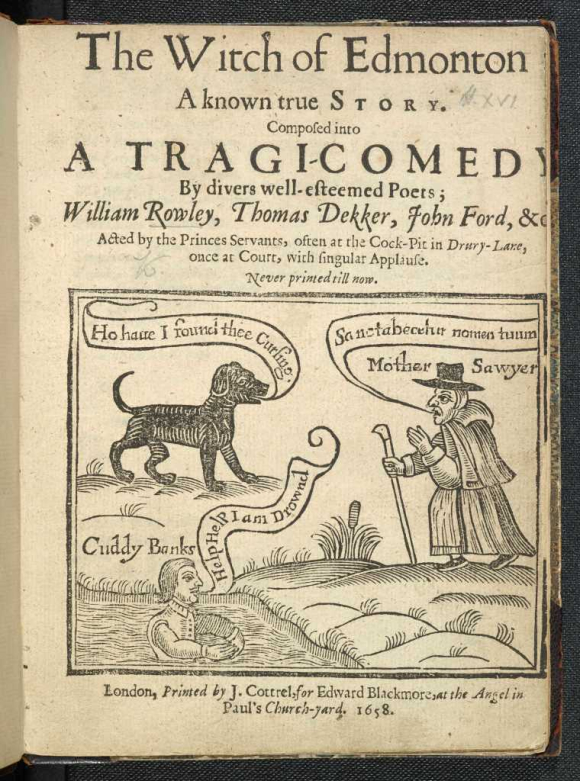 The Devil as a dog from the title page from ‘The Witch of Edmonton’, a play based on a witchcraft case 644.c.17 Images Online

So why did Margaret originally confess to these crimes? Just being accused of witchcraft at the time was dangerous. To deny involvement could lead to torture, while to confess would result in a death sentence. Interrogators were keen on obtaining confessions to secure a conviction. Torture, in particular sleep deprivation, and leading questions were often used to confuse suspects and extract ‘evidence’. It seems unlikely that Margaret’s confession was freely given, as she later denied all charges, but she died before her trial. Both Egerton MS 2879 and the Presbytery minutes bring us closer to what it might have been like to be accused of witchcraft in early modern Scotland.

Posted by Margaret.Makepeace at 08:30:00 in Conflict , Manuscripts , Women's histories