Pageantry, Parade and Presents in Persia

In February 1809, a delegation from the British Government and the East India Company presented the Shah of Persia with a letter proposing an alliance between the two powers. This alliance was intended to thwart French attempts to use Persia to threaten Britain’s Indian Empire, as well as offer Persia military assistance against the Russians in the Caucasus. 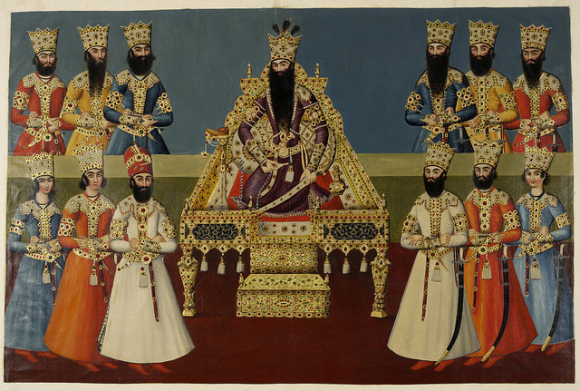 The envoy, Harford Jones, arranged for a display of strength in the form of a procession consisting of troops and members of his staff to impress the Persians. With this procession came a train of gifts, even the letter Jones was tasked to deliver was richly appointed. The records of the East India Company contain a list of these gifts, including firearms produced by the famous gunsmiths Manton.

The records also contain a set of receipts for some of the gifts, including a bill from Nunn and Barber Haberdashers of London for three letter bags: “…A very elegant white satin bag embroidered in gold extremely rich with gold cords of four tassels…”. This, along with two other bags cost the princely sum of £32.12s, the equivalent of over £1,000 today.

As well as these lavish letter bags, Mr Sydon Williams was paid £7.17s.6d for a “drawing of flowers… envelope… and trim”. There is also a bill for “Turkey boxes with velvet” and “cedar boxes” costing £9.0s.6d, presumably to carry everything else.

These gifts were intended to impress the Persian Shah and his court, demonstrating that the military strength shown in the parade to the palace was supported by the cash to back any promises made to the Persians, should they side with Britain.

Further reading:
India Office Records - Persia Factory Records IOR/G/29/37; IOR/G/29/32 f.530
Sir Harford Jones Brydges, An Account of the Transactions of His Majesty's Mission to the Court of Persia, in the years 1807-11 ... To which is appended a brief history of the Wahauby (1834)

Posted by Margaret.Makepeace at 08:30:00 in Journeys , Middle East , Politics