Showman John Sanger’s newly-built Royal Hippodrome in Sheffield promised to provide splendid entertainments in December 1888.  The programme at Sanger’s New Royal Circus was regularly changed but additional attractions were brought in for the Christmas season. 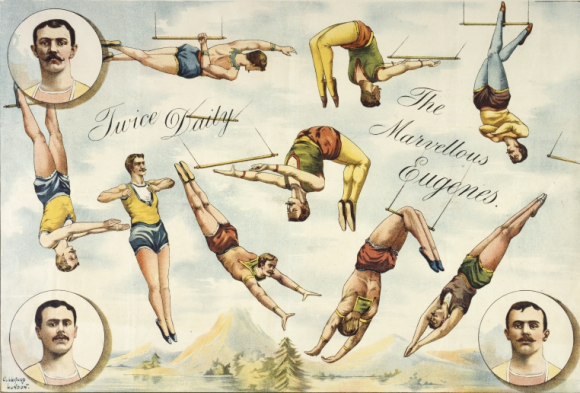 On Christmas Eve Sanger staged a ‘gorgeous‘ spectacle, The Carnival on Ice or Fete in St Petersburg, modestly promoted as ‘the grandest production ever introduced into an arena’.  No expense had been spared, with lavish costumes and sensational effects.  The arena with sawdust had been transformed into a scene of Russian winter.  A packed appreciative crowd was treated to sleighs drawn by ‘diminutive symmetrical ponies’; ‘fancy and scientific skating’ by the Lisbon Troupe; snowstorm scenes; fights with bears; a snow ballet; and a harlequinade. 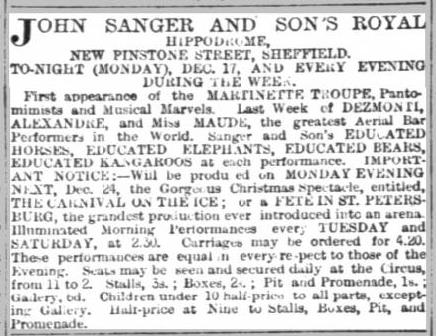 Crowds spilling out of the circus could roam the streets in search of further seasonal delights to sample. They might wish to fortify themselves with one of G Hiller and Son’s celebrated pork pies – over one ton of these had been sold at Christmas 1887.  Or they might browse in the showroom of J S and T Birks who were offering crystallised fruits; calves’ feet and other jellies; magic bouquets; bon-bons; Chinese and Japanese lanterns; wreathes; French and fancy confectionery.  Young and old were invited to walk around T and J Roberts’ Christmas bazaar at The Moorhead.  On display were 10,000 gifts - dolls; musical toys; ornaments; work boxes; and fancy baskets. And I do hope that shoppers remembered to pick up a copy of the Christmas number of the Sheffield Daily Telegraph. This comprised seventeen original complete stories for just one penny, including A Prince of Spoons; The Voice from the Dead House; Mr Buffrog Scalped; and Hah Aw Killed a Tiger at T’Owd Casino.

The Sanger family features in  There Will Be Fun – a free British Library exhibition on Victorian popular entertainments, open until March 2017. See rare and wonderful treasures from the Evanion Collection.