The history of advertising is told via great men: in the early 1960s David Ogilvy wrote his Confessions of an Advertising Man and Winston Fletcher recently published his memoir-cum-history Powers of Persuasion. This blog tells of an untold life in advertising: that of a journalist turned statistician, Jesse Scott, whose periodical, The Statistical Review of Press Advertising, is often neglected by social and economic historians of modern Britain. 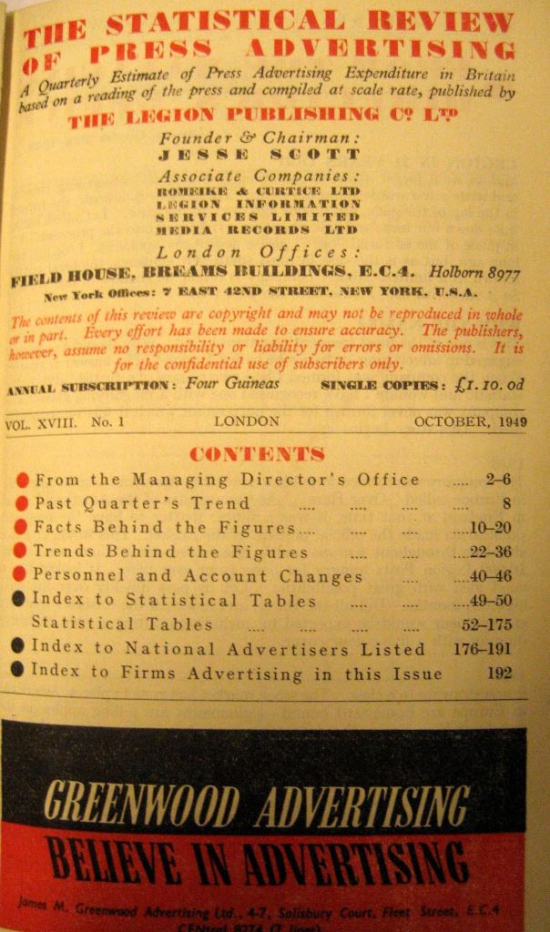 The Statistical Review of Press Advertising October 1949 - a problematic year of continuing austerity for the advertising trade when the Labour government sort to restrain proto-Mad Men!

Jesse Scott migrated to the UK from the US and in 1928 set up a company to publish the American Legion magazine in Europe. This venture failed but his friends put a proposition to him. They noted that advertising in the UK was expanding fast and so manufacturers and the media required new sources of information: why did he not exploit this gap in the market by getting his company to counter all the ‘soft pedal and hush hush about expenditure’? (The Review, I, 1, October 1932.)

From 1932 to 1962 Scott’s company produced hard facts about the hard sell. The Review published figures on advertising expenditure by surveying quarterly all the space given over to display advertisements in national daily, evening and Sunday papers; provincial daily and evening papers; provincial and suburban weekly papers; and weekly and monthly trade and technical periodicals. From 1956 The Review also included expenditure on commercial television. 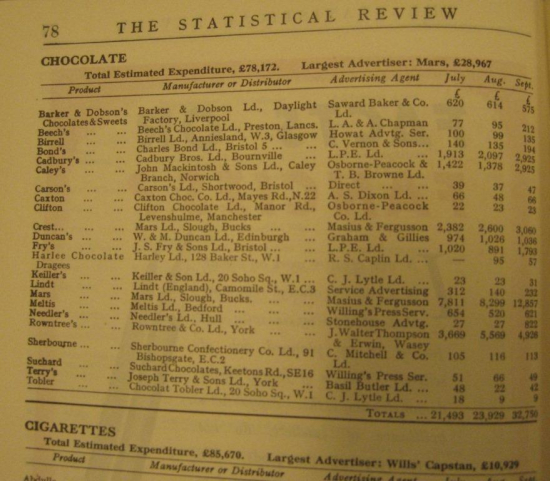 The Review categorised data by product type, brand and firm: note that expenditure on Mars was the highest, and that this would have been a luxury product during the war and post-war austerity as sweets were rationed and expensive.

To compute an estimate of total expenditure, Scott multiplied his estimates of space given to adverts by standard market rates for advertising copy. From the 1940s and beyond, social scientists and the Advertising Association used these figures to calculate total expenditure on advertising, adding in non-mass media forms such as posters and direct mail (see Clayton for a critical evaluation of these methods). 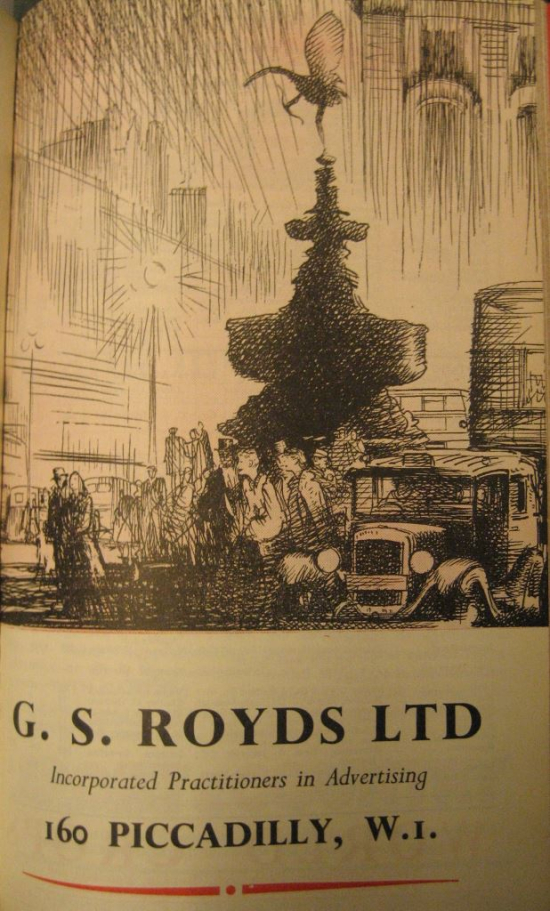 The Review generated revenue via subscriptions and from adverts placed by media organisations, such as newspaper groups and advertising agencies as illustrated by this page promoting G. S. Royds Ltd.

By the mid twentieth century expenditure on advertising had become a controversial subject: scholars, politicians and cultural commentators alleged that vast sums were being wasted on puffery. In 1953, for example, Aneurin Bevan, a Labour MP, ex-cabinet minister and de facto leader of left-wing faction within the Party, provoked delegates at the Advertising Association conference by labelling advertising as “evil’—a trade that created a consumer who was “passive, besieged, assaulted, battered and robbed” (Sean Nixon, Hard Sell, p. 164). Make do and Mend - The government also advertised and The Review counted this expenditure which, as in this case of a wartime propaganda poster, presented the anti-thesis to the message of private sector adverts: consume more branded goods.

Scott disagreed with this socialist critique and he used his editorials to argue that advertising had social value: it was, he argued, a means by which consumers gained information about products, and thus a vital component of a dynamic capitalist economy. As an American he was ideally placed to promote advertising, which in the US had become, he claimed, ‘an indispensible element in sustaining economic activity’. Scott believed that if British firms were to compete at home and overseas they had to adopt American methods of selling, and embrace advertising wholeheartedly. Jesse Scott, Stats Man, had become Ad Man, an advocate for advertising.

Posted by Margaret.Makepeace at 08:30:00 in Business , Commerce , Politics , Work