On Valentine’s Day 1904, Ernest Down made a proposal of marriage to Bessie French at Plymouth Friary railway station. In June 1905 Bessie took Ernest to court to recover damages for breach of promise. 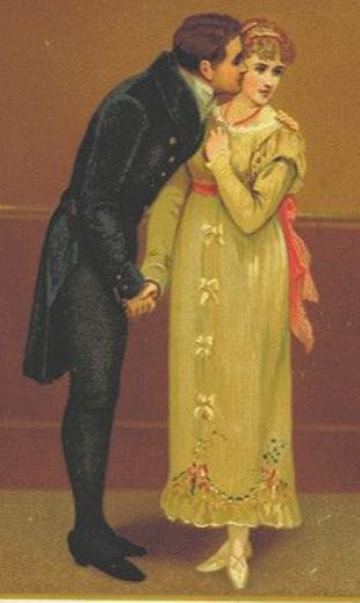 From Frederick Langbridge,  Love-Knots and Bridal-Bands: poems and rhymes of wooing and wedding, and valentine verses (London, 1883) BL flickr

Ernest Down worked as an assistant at his father’s dental practice in Plymouth.  The attachment between Ernest and Bessie began in January 1904.  The following month, on 14 February, Bessie and her mother were leaving Plymouth for London when Ernest appeared at the railway station.  He asked Bessie to become engaged to him.  Bessie refused as they had known each other for such a short time.  However she said that if he still wanted to marry her in six months’ time, he should ask again. She would then give him a definite answer one way or the other.

The couple corresponded regularly whilst Bessie was in London.  Ernest was not present at the Devon Assizes and so was spared the embarrassment of hearing his declarations of undying love ''From your Darling Boy' read out loud in court by Bessie’s counsel. This poem was greeted with laughter:

Forget Me Not
I love you now, and shall for ever,
Your love may change, but mine will never!
Though separation be our lot
Dearest one, forget me not:
Forget me not, though far away,
And other faces see;
There’s not an hour that passes by
But what I think of thee. 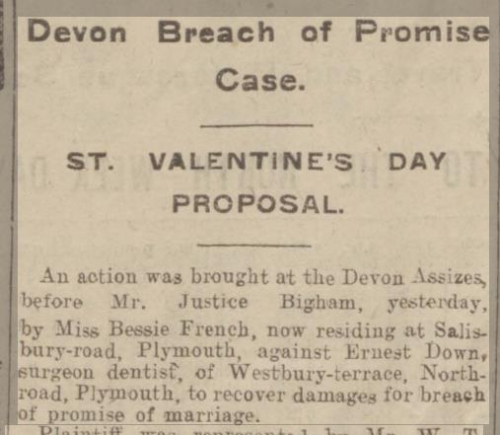 Bessie was questioned by the judge. Ernest had told her that his father wished him to break off the engagement and that he would give her the reasons the following evening.  He did not turn up.

The judge summed up the evidence: Ernest had indeed broken his promise to marry Bessie after his father objected.  Justice Bingham advised the jury to award only a moderate sum in damages to ensure that Bessie would receive some payment from the young man. After a few minutes’ deliberation, the jury awarded Bessie £50 in damages.

Justice Bingham’s concern that Bessie might not get any money was well-founded.  In May 1906 Ernest appeared before the Official Receiver in Plymouth.  He filed his petition in bankruptcy saying he was unable to meet the judgment given against him at the Devon Assizes for breach of promise.

Posted by Margaret.Makepeace at 08:30:00 in Domestic life , Women's histories