In Saturday night’s episode of the BBC drama Taboo, James Delaney was keen to acquire saltpetre, the main constituent of gunpowder.  This resulted in a violent raid on the East India Company’s warehouse to steal a supply.

Saltpetre, or potassium nitrate, forms naturally in certain soils, or it can be manufactured by mixing decaying organic matter with alkalis. It was imported from India in large quantities by the East India Company .  In June 1814, the homeward bound East India fleet arrived in the Channel carrying 23,199 barrels of saltpetre.

Because of its inflammable nature, the East India Company kept its saltpetre at a distance from the City of London.  Most was stored at the Ratcliff saltpetre warehouses which stood to the south of Cock Hill in Shadwell. The original Company warehouses built in 1775 by George Wyatt at a cost of £16,000 were destroyed by fire in July 1794.

The Times reported that the fire began at the premises of Mr Cloves, a barge builder, when a pitch kettle that stood under his warehouse boiled over.  As it was low water, the flames spread to an adjacent barge laden with saltpetre and other stores. ‘The blowing-up of the salt-petre from the barge, occasioned large flakes of fire to fall on the warehouses belonging to the East-India Company, from whence the salt-petre was removing to the Tower (20 tons of which had been fortunately taken the preceding day). The flames soon caught the warehouses, and here the scene became dreadful; the whole of these buildings were consumed, with all their contents, to a great amount.  The wind blowing strong from the south, and the High-street of Ratcliffe being narrow, both sides caught fire, which prevented the engines from being of any essential service.’

‘The Saltpetre destroyed at the late fire at Ratcliffe, ran towards the Thames and had the appearance of cream-coloured lava; and when it had reached the water, flew up with a prodigious force in the form of an immense column.  Several particles of the petre were carried by the explosion as far as Low Layton, a distance of near six miles.’

A fund was launched to provide relief for the hundreds of people who had lost their homes and their personal belongings, including working tools, in the fire. The Company subscribed 200 guineas to this fund and quickly set about rebuilding and enlarging the saltpetre warehouses with the addition of an embankment on the Thames. 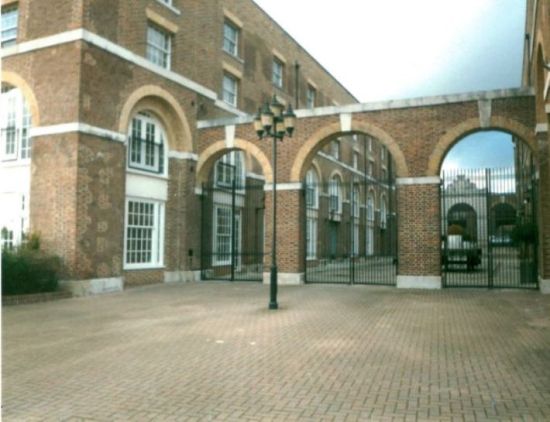 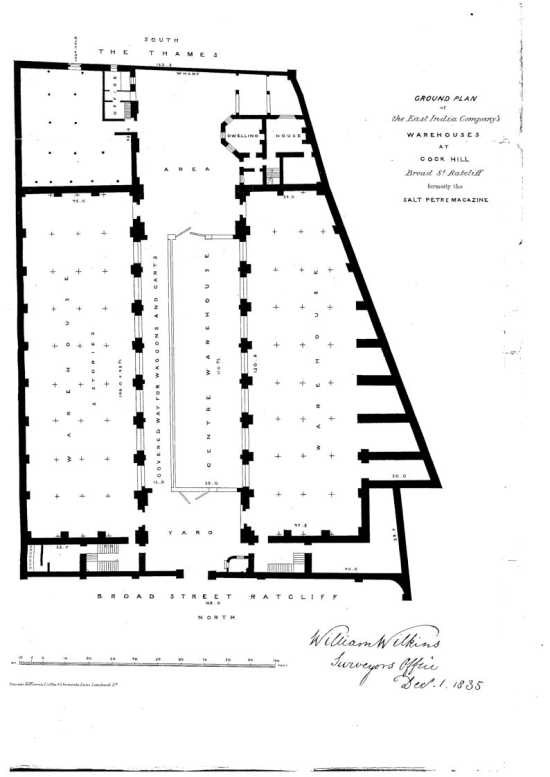 The Ratcliff saltpetre warehouses have survived to the present day, escaping the threat of further fires and explosions to outlive the East India Company warehouses storing less dangerous cargoes. Two of the original three buildings have been restored.as part of the Free Trade Wharf development. 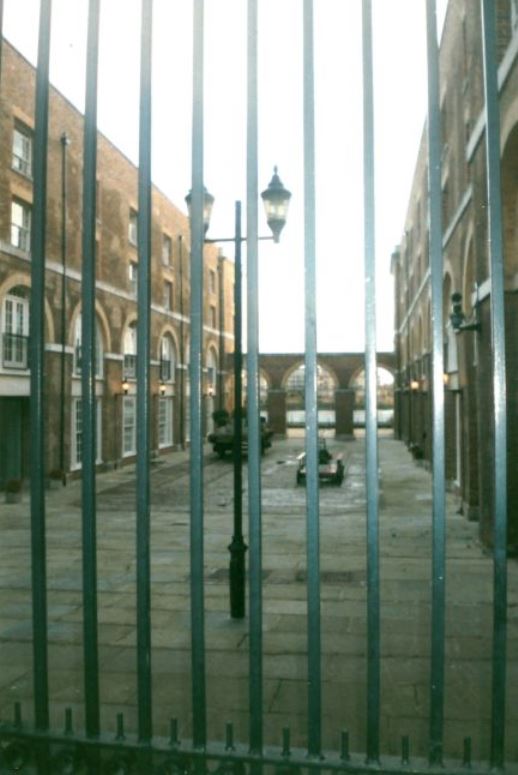 Two blocks face each other across a courtyard running between the Thames embankment and The Highway. Author's photo

The Company arms appear over the 1796 gateway on The Highway side which was rebuilt in 1934. 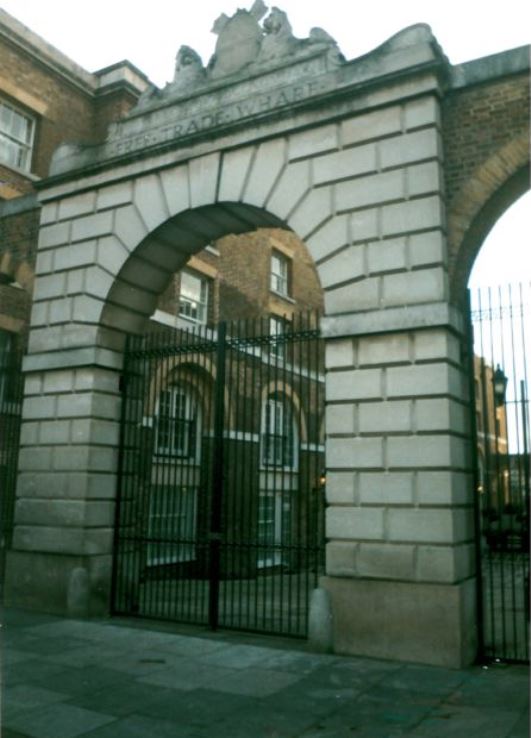 1796 gateway on The Highway surmounted by the East India Company arms. Author's photo

I strongly recommend the walk from Limehouse Basin following the Thames path round to Free Trade Wharf.  The views down the river are very impressive, especially on a sunny day.

Posted by Margaret.Makepeace at 08:30:00 in Commerce , Science , South Asia