Value in unexpected places: The sole surviving copy of 'The Grounds of Learning', a seventeenth-century schoolbook

As 2016 drew to a close, we were delighted to acquire the only known copy of an early schoolbook entitled The grounds of learning; or, The readiest way of al others, to the true spelling, true reading, and true-writing of English, written by Richard Hodges (-1657) and printed in 1650 by William Dugard (1606-1662).  Hodges was a schoolmaster and author who lived and worked in Southwark, London. His later works, including The Grounds of Learning (1650), were printed by William Dugard, who also doubled up as a schoolmaster, overt royalist and, interestingly, a friend of John Milton. At the Merchant Taylor’s School, he acquired a number of presses and set up a print shop within the school itself. 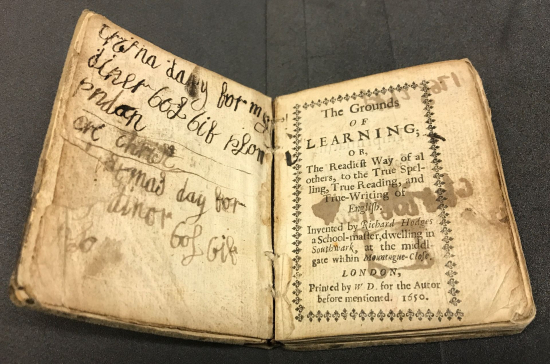 Hodges wrote The Grounds of Learning primarily for children as early learners of literacy. By today’s standards it would be considered somewhat uninspiring for a juvenile audience. It covers the alphabet, punctuation, spelling and pronunciation. This is followed by a section on Biblical teachings, reminding us that, in the context of seventeenth century Protestantism, the ultimate aim of literacy was to enable access to the Bible and other sacred materials. The market for children’s books, educational or otherwise, was still in its infancy in the 1650s and consisted mainly of dry primers (early textbooks), catechisms and grammars. It was only in the second half of the century that awareness of child development grew and educational works became more creative, incorporating pictures and stories into their lessons. Eventually popular tales like Tom Thumb and Jack the Giant Killer were printed specifically for children, often illustrated with woodcuts and bound in bright, colourful paper. The market grew from there. The book itself is small and it’s easy to picture pupils rifling through it to find the right section. It was originally bound in cheap leather, probably calf or sheep, and has since been re-covered with utilitarian reverse leather to prolong its lifespan. This unfortunately didn’t prevent a couple of leaves going missing at some point in its history. Inside, the endpapers are splattered with the ink blots, doodles and signatures of the book’s earliest young owners. These include one Hannah Barrow who appears to have been given the book as a Christmas present. She scrawled her name on as many blank pages as she could find, even writing directly to “all you that look within this book” on the front endpaper. Whether she was motivated by pride in her Christmas gift or boredom in her lessons, we’ll never know. 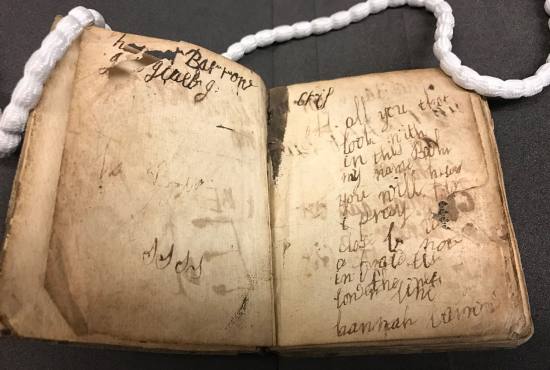 Cheap, ephemeral items like schoolbooks can be just as rare and valuable as expensive, lavishly produced works. Maybe other copies of The Grounds of Learning have survived, buried in lofts, covered in dust and forgotten about but, until they are discovered, ours remains the only known surviving copy, a testament to all the children who used it and the growing literacy rates in seventeenth century England.

To find out more about the history of children’s books from the 18th century onwards:

The origins of children's literature

Posted by Margaret.Makepeace at 08:30:00 in Rare books