When Jane Austen died in 1817, aged 41, her portable writing desk was inherited by her sister Cassandra. It was later passed down through her eldest brother’s family. In 1999, Joan Austen-Leigh, Jane Austen’s great-great-great-niece, very generously entrusted it to the care of the British Library. Among the items that had been stored for generations in the desk drawer were three pairs of spectacles. According to family tradition, they all belonged to Jane Austen. The British Library has for the first time had the spectacles tested. Our Conservation department was involved from the start, to ensure that no harm would come to them. The company Birmingham Optical kindly supplied us with a lensmeter to measure their strength, and their specialist staff undertook the tests. 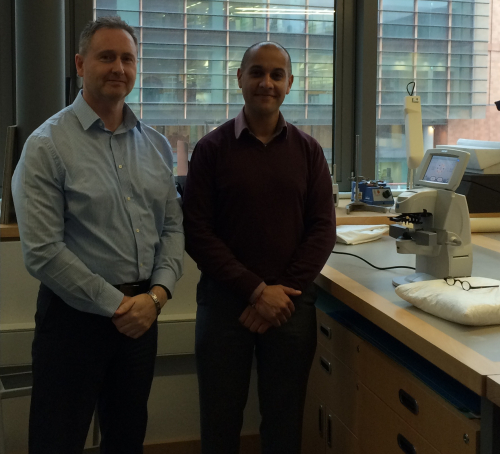 Louis Cabena (left) and Deep Singh (right) from Birmingham Optical, with lensmeter and spectacles in the British Library Conservation Centre.

The tests revealed that the three pairs of spectacles are all convex or ‘plus’ lenses, so would have been used by someone longsighted. In other words their owner needed glasses for close-up tasks, such as reading. Interestingly, ‘tortoiseshell pair B’ is much stronger than the others.

We showed these results to the London-based optometrist Professor Simon Barnard. He believes there are a number of possible reasons for the variation in strength. Jane Austen may always have been longsighted, and initially used the wire-framed pair for reading and distance viewing. She later required a slightly stronger pair (tortoiseshell pair A) for reading, and used the strongest pair (tortoiseshell pair B) for extremely close work, such as fine embroidery, which would have been held closer to the face than a book.

Austen is known to have had problems with her eyes. She complained in several letters about her ‘weak’ eyes. Could it be that she gradually needed stronger and stronger glasses for reading because of a more serious underlying health problem? Professor Barnard believes this is a possibility. He points out that certain systemic health problems can cause changes in the vision of both longsighted and shortsighted people. Diabetes is one such condition, because it can induce cataracts. A gradually developing cataract would mean that an individual would need a stronger and stronger prescription, over time, in order to undertake close-up tasks. However, diabetes was fatal at that time, so someone might not have lived long enough to require several different prescriptions in succession.

If Austen did develop cataracts, a more likely cause, according to Professor Barnard, is accidental poisoning from a heavy metal such as arsenic. Arsenic poisoning is now known to cause cataracts. Despite its toxicity, arsenic was commonly found in medicines in 19th-century England, as well as in some water supplies. In this situation, Austen would have switched from using the wire-framed pair to tortoiseshell pair A, then pair B, as her cataracts got progressively worse.

Jane Austen’s early death has in the past been attributed to Addison’s disease (an endocrine disorder), cancer and tuberculosis. In 2011, the crime writer Lindsay Ashford suggested that Austen died of arsenic poisoning. She came to this conclusion after reading Austen’s description of the unusual facial pigmentation she suffered at the end of her life – something commonly found with arsenic poisoning. Ashford’s novel The Mysterious Death of Miss Austen strays from theories of accidental poisoning into rather more fantastical murder. The variations in the strength of the British Library’s three pairs of spectacles may indeed give further credence to the theory that Austen suffered from arsenic poisoning, albeit accidental.

We should, however, inject a note of caution at this point: although prescription lenses were in use in Austen’s day, we don’t know whether these glasses were prescribed for her by a physician, or whether she bought them ‘off-the-shelf’. We can’t be completely sure that she wore them at all. However, we are keen to publish these test results in the hope that other eye specialists will share their ideas and opinions with us.

We know this subject is already of interest to literary scholars. Janine Barchas and Elizabeth Picherit of the University of Texas at Austin have taken a keen interest in the spectacles in the British Library, and have also been investigating Austen’s references to spectacles in her novels. Their theories have now been published in the journal Modern Philology. We look forward to further discussions and debate on this topic.  The spectacles themselves have just gone on display in the British Library’s free Treasures Gallery for all to see.

Posted by Alexandra Ault at 9:19 AM